Summer's Over, Back to School, But the Fall Movie Season Approaches 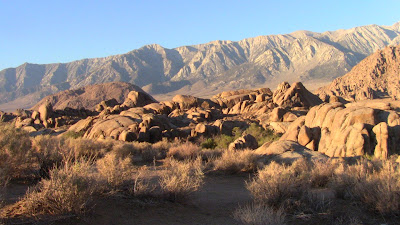 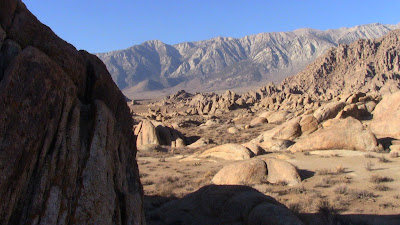 As the summer movie season fades out with a whimper, I look forward to, hopefully, better releases this fall. With travels up to Maine and out West to the San Francisco Bay Area and the Sierra Nevada, taking in the oft-used film location of the Alabama Hills above, I found less time to blog, and I did not report on the following:

The Conjuring, a clever and suspenseful haunted house tale with Patrick Wilson and Vera Farmiga; Planes, basically Cars with wings, a cheerful romp that provides memorable images as the planes engage in a global aerial race; 2 Guns, a violent dick flick (as opposed to chick flick – credit to my younger brother for this), in which Denzel Washington and Mark Wahlberg engage in some pretty creative dialogue as they take on a drug cartel backed by the CIA (supplanting Nazis and Arab terrorists, I guess, as the new stock movie villains); and Getaway, an action-paced flop with an incredibly unwieldy plot, a tired Ethan Hawke, and Selena Gomez, looking cute and very un-tough as she attempts to stretch her acting repertoire.

What’s next? There are some movies to look forward to, but just not my favorite genres. Despite the silly preview with Sandra Bullock swinging in space, I’m looking forward to Cuaron’s Gravity. An extended preview of Captain Phillips, with Tom Hanks, has increased my interest in this movie. And Ron Howard’s Rush, whose plot seems to be a remake of Grand Prix, looks compelling. Of course, we will check out anything by Scorsese – with DiCaprio as an additional draw (The Wolf of Wall Street). Meanwhile, Jason Bellamy and I will have to check out The Secret Life of Walter Mitty, since we watched them filming on Sixth Avenue in NYC, and the lady managing the extras allowed us to sit in the back of one shot, so there’s a very slight chance, but a chance nonetheless, that we are in the final cut.

Will also see The Monuments Men (bad title) because it may achieve some of the look and tone of The Great Escape; The Invisible Woman because Fiennes and Charles Dickens are big draws for me; American Hustler because of a cast led by Bale; August: Osage County because I’ve taught the play in A.P. English for the past three years – and I’m curious how the casting will work out, since I think most of the performers are miscast – except for Sam Shepard who has all of one scene; Catching Fire because it’s, you know, Jennifer Lawrence and The Hunger Games, and it's a must-see for all teens and high school teachers, though I feel the second book is ponderously gimmicky; and Prisoners because I’ve seen the preview so many times and I’ve got to find out who kidnapped the girls.

Posted by Richard Bellamy at 3:10 PM No comments:

To Have and Have Not: Elysium

In an interview, South African director Neill Blomkamp, who gave us District 9, said he thought it would be a nifty idea to make a sci-fi film about "the haves and the have-nots," suggesting, as it seems, that had never been done before. 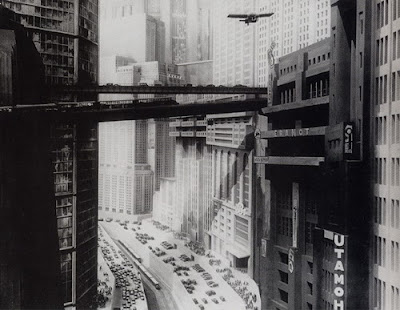 In Elysium the "haves" live in a wheel-shaped space station. There, everything is green and new and opulent; you have to be rich to live there. I found Elysium visually fascinating, but you never feel IN Elysium. You don't know what it's like to live there. The only citizens you see are running away from the scuzzy illegal aliens running across their lawns. I wanted to be taken INTO Elysium. I wanted to know what it was like to live there, like in WALL-E, we are taken up close to the fat blobby people who float around in hoverchairs and consume fattening shakes. 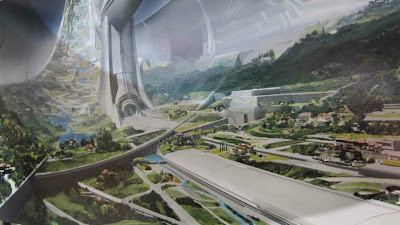 The film does an excellent job of evoking the dismal slums of L.A., filmed on location in the slums and vast dumps of Mexico City. Poor Mexico City. You really feel the crowding, the squalor, the heat, the despair. This is the best aspect of the film. 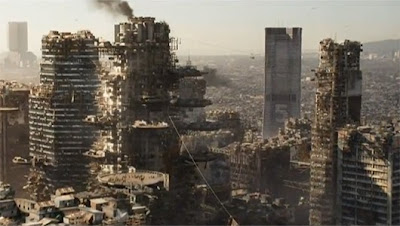 Matt Damon as Max drives the story. Matt Damon has a presence and a believability he brings to all his films. I really enjoy watching him, and here he fits right into a story that is less about ideas (the commentary is trite: the haves are like our rich people who live in gated neighborhoods, people who thank God for Republicans and Homeland Security) and more about sci-fi action.

In order to make his way to Elysium so that he can be cured of a lethal dose of radiation, Max gets fitted with an exo-suit which turns him sort of cyborg. But the dramatic possibilities of this suit are not exploited. It is never made clear what he can do with this suit other than throw some bad guy across the room. Anyway, Damon fits right into the role of a bitter "have-not" who has always dreamed of getting to Elysium. 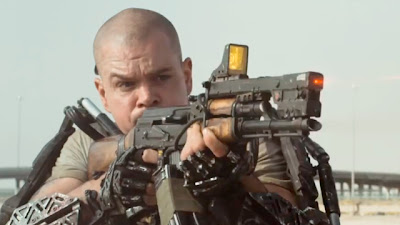 Below is Kruger, played by Sharlto Copley, star of District. Here Copley is a mechanically enhanced secret operative whose extreme methods dealing with illegal aliens get him fired, so he plans to use a rebooting code to take over Elysium and rule the world of the "haves." Copley is a suitable bad guy, and his mechanical enhancements make you wonder if he's part District 9 cyborg. 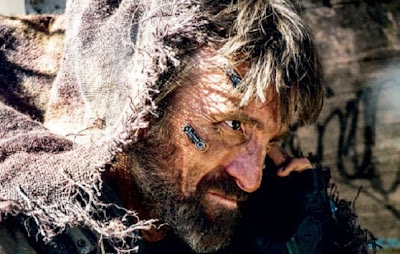 Then there's Jodie Foster as Delacourt, the dictatorial bitch who runs security for Elysium, who thinks the president is too soft, and who would love to run things herself. Unfortunately, Foster is given little to develop her character, explain her bitterness, provide some motives, explain why she constantly acts bitchy and looks sharp and grumpy throughout the whole movie. See below.

A note about accents: When we first see Foster, she is speaking French. (Foster studied French at Yale and then in France. She got pretty good at it so she likes to use it.) But then she speaks English throughout the rest of the film with an accent that isn't quite English, isn't quite American, an accent that is I don't know what. This movie has a thing about accents. Kruger goes with a South African accent that is so extreme it's hard to follow what he's saying all the time. In addition, William Fichtner plays John Carlyle, a business tycoon who wants to help Delacourt take over Elysium. Here, Carlyle speaks in a stilted robotic voice, but when he's shot, he bleeds. I thought he WAS a robot! What's with the weird robotic delivery of his lines?

There's a lot to like about this movie. It is always visually engaging. It is fast-paced. Damon is excellent. But as the action goes standard, I found myself wishing I had gotten to spend more time in Elysium and learn what it's like to live there. This would have provided a starker contrast with the vividly evoked world of the L.A. slums.

Posted by Richard Bellamy at 11:19 AM No comments: