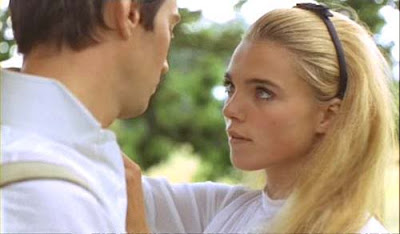 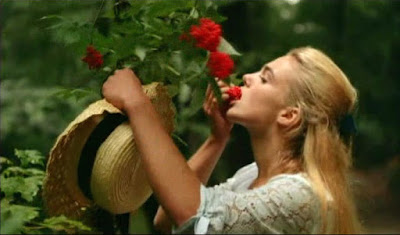 Like Terrence Malick’s lovers on the lam in Badlands (1973) and Days of Heaven (1977), Elvira Madigan (Pia Degermark) and Sixten Sparre (Thommy Berggren) in director Bo Widerberg’s hauntingly beautiful Elvira Madigan (1967) pass through an indifferent world of pastoral beauty and come to a bad end. Did shots of Elvira and Sixten gathering food while they lounge in nature, oblivious to the conventions and responsibilities that make their affair hopeless, inspire Malick’s similar depictions of Bill and Abby and Kit and Holly camping and fishing by a river while the law closes in on them? Did Widerberg’s film also influence the sensual shots of sexually frustrated girls picnicking in the rugged beauty of Australia in Peter Weir’s Picnic at Hanging Rock (1975)? Widerberg’s attention to the sensuous and sensual effect of shots of raspberries in thick cream; red currants devoured right off the bush by the hungry Elvira; red wine soaking a white cloth; white lace curtains in a sun-filled room – set to classical music (Mozart’s Piano Concerto #21 and Vivaldi’s Four Seasons) - seems to be a characteristic of the kind of lyrical cinema made by auteurs of the 1970s. Whether or not the Swedish film Elvira Madigan influenced Malick or Weir in any way, it is clear that nature is often a key element in stories depicting the intensity of the enigmatic biological and psychological processes that cause people to fall in love passionately. 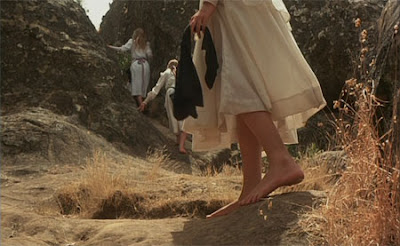 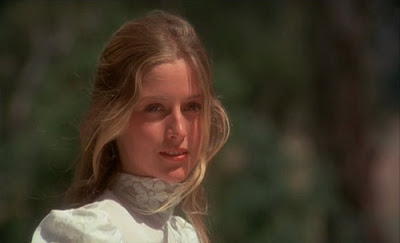 Whatever influence it has had on later decades, Elvira Madigan is very much a child of the 60s. It is about a man and a woman who turn their backs on convention, forsaking everything for love, spending their days together literally rolling in the hay and living like Mother Nature’s children. Hedvig Jensen, a tightrope walker whose stage name is Elvira Madigan, turns her back on fame. Sixten, a nobleman and a cavalry officer, deserts the army and leaves wife and children for his lover. When a fellow officer tries to make Sixten see that he is focusing on a single blade of grass and not seeing the whole world around him, Sixten sounds like a hippie poet when he responds by saying that “one blade of grass can be the entire world.” Sixten goes on to say that “words have lost their meaning.” Also very fittingly for a 60s film, Sixten makes it clear that he is leaving the army because of all that it means, and he proceeds to present a graphic description of the many layers of tissue and muscle pierced by a bayonet before it reaches the gut.

Elvira Madigan is an engaging portrait of mutual passion, memorable for how it reflects inner passion in shots of exterior natural beauty. In contrast, The Deep Blue Sea (2012) takes place mostly in interiors: darkly lit pubs and a drab flat in a building not far from rubble still remaining from the Blitz. In The Deep Blue Sea, directed by Terence Davies, Hester Collyer (Rachel Weisz), wife of a judge, falls in love with Freddie Page (Tom Hiddleston), a handsome golfer and hero of the Battle of Britain, but the passion soon becomes one-sided, leaving Hester suicidal. Unlike Elvira and Sixten, Hester and Freddie are not wired the same way. Freddie does not feel the same way about Hester, and it is impossible for him to understand how this drives Hester to such despair. Only Hester knows completely how she feels, and I totally sympathize with how she is left “between the devil and the deep blue sea,” unable to change how she feels. She can’t help the way she is wired for passion, and this leads to her despair. The joy in the ultimately tragic Elvira Madigan is that the two lovers are totally on the same wavelength from beginning to end. If they can’t be together, then it’s goodbye world. 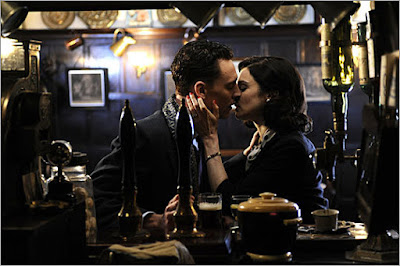 There are no golden fields, shady woods, or sunny beaches in The Deep Blue Sea, but the passionate love affair of Elvira Madigan and Sixten Sparre is almost entirely set in exquisitely beautiful and sunny exteriors. Elvira and Sixten try to enjoy their days of heaven together in an idyllic pastoral world as they run from convention, run out of money, and run out of options. Leaving each other and going back to their responsibilities is definitely not an option, and actress Pia Degermark's pure face and entrancing eyes make it very clear why a young man would not want to leave this woman. Nature provides the setting for lovemaking, picnics, an exquisite tightrope walking scene, and beachcombing at sunset. It also provides food, virtually turning them into foraging animals. Sixten and Elvira graze on mushrooms; they catch a fish; they stuff themselves with berries. In one scene, Elvira hungrily plucks clover from the ground, eating it until she vomits. Other than that scene, nature is always benevolent, providing food and sunny days and never a drop of rain. In keeping with the weather, Elvira and Sixten only quarrel once, and they make up very easily when Sixten writes “Forgive me” on a slip of paper and floats it down a creek to Elvira.

In Elvira Madigan the beauty of nature reflects the lovers’ shared passion. What we see is how they feel. Nature functions similarly in another 1967 film: John Schlesinger’s visually stunning though uneven Far From the Madding Crowd in which Bathsheba Everdene (Julie Christie) becomes the object of desire for the patient Gabriel Oak (Alan Bates), and the object of obsessive passion for Farmer Boldwood (Peter Finch), while she turns her back on both these men to pursue an intense passion for the dashing but wayward cavalry sergeant Frank Troy (Terence Stamp). (What is it with these cavalry officers?) Fields of golden wheat and remarkable sunsets reflect the passion, but there is much human turmoil here, as reflected in a devastating storm and a scene in which a herd of sheep, Gabriel’s livelihood, meets destruction. 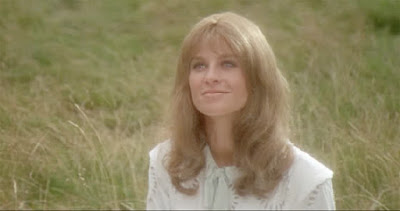 More recently, nature provides the chief background for Jane Campion’s Bright Star (2009) in which the innocent love affair between John Keats and Fanny Brawne takes place in fields of dazzling flowers, a mesmerizing thicket of reeds, and magical beech groves. Here, nature reflects the lovers’ passion, but it also mirrors the poetry that is part of what draws Keats and Brawne together. 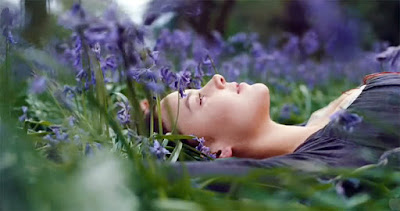 While all the films above, except for The Deep Blue Sea, portray the enigmatic passions driving the human soul in settings of sunny, natural beauty, they all carry a tone of loss and longing that juxtaposes a gut-wrenching feeling with visual splendor. Despite the majesty of a river and all it might signify, despite the breath-taking beauty of fields of grass or flowers or wheat, passion is threatened by outside forces. The days of heaven don't last forever. Nature proves to be more lasting, more powerful, or just plain cruel and indifferent. The grass is green and the sun shines, but poets and lovers fade away.
Posted by Richard Bellamy at 7:52 PM