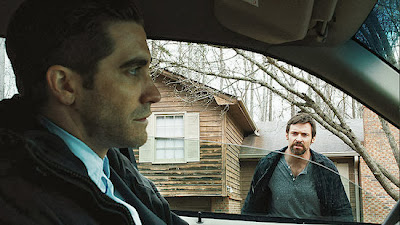 Does the end justify the means? Elements of Zero Dark Thirty thrown into a suburban child-kidnapping tale. Add elements of Silence of the Lambs and The Vanishing.

During the first third of this film, the cinematography and the naturalistic performances of a great ensemble cast kept my eyes painfully wide open as I sat on the edge of my seat. I love the shots seen through frosty or rain-streaked windows. I felt I was viewing one of the most sharply lucid and realistic films ever made.

When some bargain-price retirees started to narrate what was happening on screen (Shot: The police release the suspect (Paul Dano) from jail. Retiree: "They're releasing him!") I relocated to the unoccupied front section and embraced the wonderful images framed by Roger Deakins.

When the film wanders into literal basements of perversion and goes stereotypically lurid, I was disappointed but still riveted by the camerawork, the ominous musical score, and the film's dense sense of approaching doom.

Jake Gyllenhaal's affectations tend to irk me, but here his understated, scowling delivery fits right in. He is superb. Jackman is still invested in Valjean. Viola Davis is excellent. The cast is a strong one though I would have loved to see what they could have done with a more grounded, realistic story about families reacting to a kidnapping.

The cinematography makes just about every shot chillingly, exquisitely memorable. The best moments are in the film's first third, before Inspector Loki (Gyllenhaal) makes his first descent into a dark basement.

I need to see this again for the cinematography, also because the plot gets too convoluted for its own good, and I want to clear up some viewing quandaries.

For me, the first third of this film is the most riveting movie experience in years!
Posted by Richard Bellamy at 9:37 AM