One pill makes you . . . Limitless 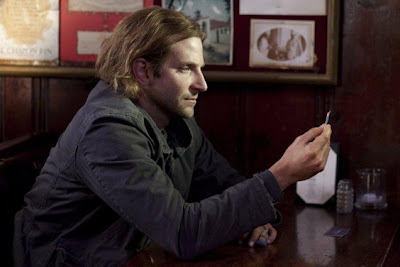 In Neil Burger’s fast-paced, entertaining film Limitless, Bradley Cooper plays Eddie Morra, a creatively paralyzed writer with a book deal for an inscrutable science fiction novel, who can’t manage to get one word down on his laptop screen until he’s slipped an experimental drug called NZT-48 that accesses 100% of his brain power, allowing him to charm his landlord’s daughter out of nagging him for the rent, help her write a law essay, seduce her, write a chunk of his novel, all in one day, and then – blastoff – the sky’s the limit.

Great name. Eddie Morra. Sounds like a bookie for the mob, or it made me think of a moray eel, perhaps suggesting Eddie’s slithery, aggressive side. Or perhaps it’s meant to suggest the moral dilemmas Eddie faces as he succumbs to the allure of the drug’s effects. Or perhaps it simply suggests that Eddie wants more out of life. Like Doctor Faustus or Dorian Gray, he dares to open a Pandora’s box in order to get a hell of a lot more out of life, even though this choice comes with a hell of a price. 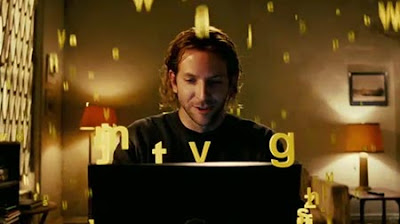 I especially enjoyed the film’s science-fiction elements and the use of creative effects to depict Eddie’s transformation. When Eddie pops his first pill, he is aware of his brain connecting with everything he knows and has observed. He notices part of a book title in landlord’s daughter’s book back, and the complete title floats through the air to his brain. When he decides to get a handle on his wastrel existence and clean up his grungy apartment, multiple Eddie’s zoom around the place, doing dishes and putting things away. I wish I could do that! Then, in the film’s best image, when Eddie sits down at his laptop and pounds out his novel in fast motion, the letters rain down from the ceiling.

Eddie certainly gets more out of life. He hands in his manuscript and wows his editor; he gets his successful girlfriend, Lindy, (Abbie Cornish) back; he picks up Italian; he makes two million on the stock market, and his agent’s avarice gets him ensnared with Carl Van Loon (Robert De Niro providing a solid supporting performance without doing anything silly), who wants to use Eddie's stock market expertise to negotiate a multi-million-dollar merger with another corporation.

But as Faustus and Gray would tell you, hell comes your way inevitably, and for Eddie, hell is a labyrinth of life-threatening factors that lead to a number of hair-breadth escapes for himself and for his girlfriend throughout the latter half of the film. The thrills arrive in good time, just when the movie seems to be bogging down in Wall Street territory, and the suspense comes from wondering whether or not Eddie can elude various sinister figures on his tail, survive the drug’s potentially lethal side effects, and still come out with success and Abbie Cornish. Meanwhile, it’s fun when he, as well as Lindy in a suspenseful fix amidst the granite outcroppings of Central Park, uses the pill to sharpen his wits in order to get out of a tight spot.

Although the plot leaves a few loose ends to wonder about, I found this a gripping piece of entertainment that moves along swiftly, wows with clever camerawork, and includes an engaging lead performance by Bradley Cooper, and the only thing I wondered was how grungy, long-haired, heavy-drinking Eddie Morra got that book deal in the first place.
Posted by Richard Bellamy at 8:20 PM