After outlaw Jake Lonergan (Daniel Craig) wakes up in the middle of nowhere with an alien weapon strapped to his wrist, and after he overcomes three stereotypical Western bullies, he straps on a six-shooter, dons a hat, and rides off across classic Western movie terrain. It was enough to make my viewing-eyes itch and my heart swell for my favorite genre, the rarely produced Western.

Knowing that Cowboys & Aliens is not a straight Western, I was rather pleased as the film took pleasure in fleshing out the action-oater side of this rather curious hybrid, taking extra time with purely Western elements and themes as it develops the characters who live in the typically dry and dusty town of Absolution.

When tyrannical cattle baron, Woodruff Dolarhyde (Harrison Ford), rides into town to spring his wayward son, Percy (Paul Dano), from jail before he can be shipped off to the U.S. Marshall, it’s like a scene out of Rio Bravo. For the most part, Ford’s performance is cringe-worthy, but his craggy face and macho swagger fit the genre nicely. Keith Carradine is perfect as the aging but competent sheriff; Sam Rockwell, playing the mild-mannered bartender/doc, overdoes the silly meekness but develops an enjoyable presence; and it’s fun to see Raoul Trujillo (The New World) as an Apache chief. Meanwhile, Olivia Wilde plays a mysterious woman hanging around town, very interested in how and where Jake got that cool blaster on his wrist. But when her true identity is revealed, I was rather puzzled by some inconsistencies in regards to what she knows and what she can and cannot do.

The sci-fi side of this genre hybrid employs the standard Earth-invading, human-snatching aliens (shades of War of the Worlds 2005), but the enjoyment comes from the clever fusing of genres and the inclusion of some nifty ironies. In the film’s best moment, we get the typical showdown in the street, but this time it’s between a lone gunman and an alien spacecraft, and when Jake sees that six-guns are doing little damage, he twirls his revolver into his holster gunslinger-style and blasts away with his alien weapon. In addition, there is considerable tension built by the first appearance of the alien spacecraft to people for whom a flying contraption is beyond their imagination. Cowboys shooting at flying aliens from the backs of galloping horses provides a thrilling image, and I love the irony of the motive for this alien invasion: just like many Western bad guys they are after gold! It’s also fitting how the part of the alien mothership sticking out of the ground looks like your ordinary badlands crag. 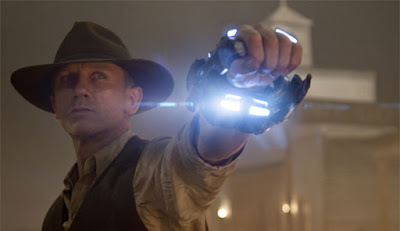 But with all the aliens trundling around, with all the laser blasts and inexplicable mothership machinery, Cowboys & Aliens adheres more to its Western persona than anything else. We get whole bunches of horses galloping across Western terrain and a hell of a lot of shooting at this or that, even the ubiquitous Western target shooting, as typical Western themes are played out. An orphaned boy develops manly John Wayne courage. Doc learns to shoot straight at the right time. Crusty old Woodruff reveals his rough past and shows that he’s got a good heart after all, and the taciturn stranger with the dark past returns to save the innocent townspeople. The sci-fi elements provide interesting visual contrasts and some chuckle-inducing ironies, but the bug-eyed, green-blooded aliens might as well have been the members of a lost Indian tribe or a gang of very ugly outlaws, and the movie could have been what it feels like it wants to be more than anything else: a good old Western.
Posted by Richard Bellamy at 10:24 AM