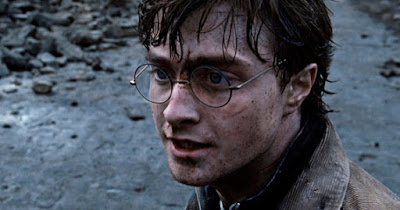 Harry Potter and the Deathly Hallows, Part Two is the raw, thrilling grand finale to the Harry Potter saga, begun by the novels of J. K. Rowling in 1997, visualized by the eight-movie series that began in 2001. Throughout, I have not been an avid fan of the saga. Unlike many readers, I was not dazzled by the first novel. I read the first four novels aloud to my young son and daughter, but I often skipped through pages of dialogue that seemed less like pith and more like padding. To me, the stories read too much like video games: meet the challenge, solve the problem, move to the next level. When the movies came out, I accompanied both of my kids to the early ones, my daughter to all of them, sometimes feeling bored, sometimes nodding off to sleep, enjoying some more than others. But I must admit that the lengthy, sometimes ponderous, often bloated movies of the series successfully establish all the details and emotional connections between characters that are brought together masterfully and very touchingly in the final film. I don’t think the books and the films had to include so much padding, but all the ground covered in the previous films prepares the way for the gripping denouement achieved here.

This time the plot is simple and not over-burdened by the machinations and convoluted (often very contrived) hocus-pocus that weigh down the previous films. Harry and friends Hermione and Ron have their work cut out for them. Find a few horcruxes, destroy the pieces of Voldemort’s soul that are hidden in those horcruxes, and do away with “you know who.” Very quickly the forces of evil swoop down upon the forces of good, holed up in beloved Hogwarts, a wizards’ Alamo, and the final battle dominates the film.

We get shades of The Lord of the Rings with the evil hordes, including battle giants, massed outside the “castle,” shades of World War II movies with the talk of a “suicide mission” and the whole Hogwarts resistance movement. In addition, Voldemort’s army bombards a magic shield protecting Hogwarts; the good guys blow up a bridge; and the Hogwarts wounded huddle in the rubble of a shelter like the Brits during the Blitz. But when the battle is drawn, the action is gripping and characteristically Potteresque as Harry and friends evade a raging fire in the Room of Requirement, a storeroom of needful things that looks like the famous shot of Citizen Kane’s collection of possessions; and Harry attempts to slay the serpent, another horcrux. In addition, the fighting pauses for some crucial character development and dramatic moments, notably when Harry visualizes Snape’s backstory, and when he walks with Dumbledore in a dazzling white train station in his mind. I love it when Harry wonders where the train will take him, and Dumbledore responds meaningfully, "On!" (Yes, and Daniel Radcliffe will have to "go on" from here, his last performance as the famous Harry Potter.)

All the action and drama are enhanced by distinctive cinematography. Visually, this is an outstanding episode filled with striking images: a fearsome dragon soaring over London; Voldemort’s horde; a long shot of beleaguered Hogwarts; the minimalist white train station in Harry’s mind where he walks with the deceased Dumbledore. In addition, the poignant departures captured in the final scene on Platform 9 and ¾, nineteen years later, make for one of the most touching scenes in the eight movies.

With a lot going on, perhaps too much going on, in the final sequences, it seems that every dear character (except for Ginny Weasley) gets to do something funny or dramatic: come to the rescue, die, deliver a parting one-liner, or call some witch a bitch, and at times it’s just caricatures doing what they characteristically do, but Daniel Radcliffe’s Harry Potter, in his eighth film evocation, is a gritty, bold character that is firmly established as a classic film character. Face dirty, corduroy jacket blackened with soot, Harry is much more than an action hero as he carries the burden of so many memories, neatly brought into this final film in snippet flashbacks, to the final showdown with Voldemort. This Harry is far from the little chubby-cheeked boy who stood in the snow with his owl in Harry Potter and the Sorcerer’s Stone. This Harry is all man.

Days before seeing Part Two I fortunately re-watched Deathly Hallows, Part One and did extensive Wikipedia research on previous episodes; otherwise, I would have been lost, and the dramatic reveals and comeuppances would have fallen flat dramatically. But it is a considerable compliment to the filmmakers of this final installment, the leanest and meanest of the them all, that I felt my heart swelling and my eyes tearing up for a cast of characters I had viewed mostly with indifference during the long history of this cinematic epic.
Posted by Richard Bellamy at 8:00 PM