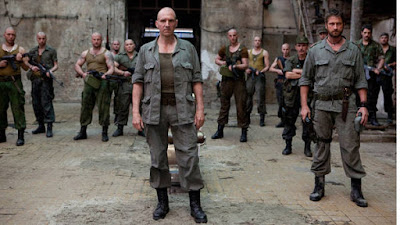 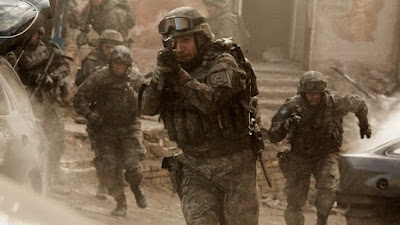 Shakespeare assumed we’d come to the theater ready to use our imaginations. His speeches, as delivered by the performers, provide the drama, but trappings such as weather and the terrain of the setting, as described in the speeches, are up to us to imagine. Similarly, as the texts come to us today, a Shakespeare play is a bare template open to an imaginative director’s visualization. Shakespeare doesn’t seem to have been big on stage directions. In the famous duel scene in Hamlet, the spare stage direction They play has invited countless interpretations for the choreography of this dramatic episode. But Hamlet is the kind of Shakespeare play that doesn’t need a lot of effort from actors or set designers to enhance its language. The language alone is engrossing.

Shakespeare’s Coriolanus, however, is one of those utilitarian Shakespeare plays whose functional speeches require a little more effort from a director, and Coriolanus, as directed by Ralph Fiennes, gets its drama pumped up by the director’s imaginative approach. Here, Fiennes takes the tragedy of Caius Marcius Coriolanus, the kind of problem general like Patton or Custer (before the Little Bighorn) who gets an A in War but an F in Diplomacy, and establishes a 1990s Bosnia/Serbia mise-en-scène replete with villages in rocky places, garbage-cluttered streets, and unsavory stray dogs. Employing newsreel footage, news channel feeds, and scenes set in the streets and governmental chambers of a place called Rome, Fiennes really fits the language into the setting in a way that works very smoothly so that when CNN-style pundits exchange commentary in Elizabethan diction, it doesn’t seem strange at all.

In this world of a discontented populace protesting the economy and Kevlar-clad soldiers engaged in fierce firefights with insurgents toting AK-47s, Caius Marcius, as played by Ralph Fiennes, sacrifices his blood for his country by fighting Rome’s chief enemy, Tullus Aufidius. As Aufidius, Gerard Butler is superb, enhancing the drama of lines that often lack the memorable imagery of Shakespeare’s better plays. The acting is excellent throughout the film, with Jessica Chastain as Virgilia, Corolanus’s wife, and the especially engaging Vanessa Redgrave as Volumnia, his mother. Though Redgrave loses us in some of Shakespeare’s more convoluted syntax that cries out desperately for a full stop, her lines are earnestly and believably delivered, and she steals the show when she begs her vengeful, banished son, who joins forces with Aufidius, to spare Rome from invasion.

Somewhat surprisingly, in part because I’m not a big fan of his, Brian Cox is outstanding as Menenius, Coriolanus’s friend and political ally who tries to guide the stubborn, uncouth general in his dealings with the roused rabble, trying to prevent Coriolanus from saying the wrong thing, which he invariably does. You common cry of curs doesn’t go over big when you are trying to court the favor of your constituents. But Menenius knows his man. He warns the people not to turn Coriolanus into their foe because he is well aware that “there is no more mercy in him than there is milk in a male tiger.” Nice line. He knows that when Coriolanus is banished, he has grown “from man to dragon” and Rome had better watch out!

Coriolanus’s fatal flaw is that he can’t abide the common rabble, whose breath he hates “as reek o’ th’ rotten fens.” Good line; nice alliteration. He’s not a very likable dude, and with head shaved bald and face lined with old scars, you can’t help looking at Fiennes as Coriolanus and thinking of Voldemort, and Fiennes makes sure that the vengeful warrior gets his sinister moments. I love it when Coriolanus becomes a vagabond and wanders into Aufidius’s stronghold to pledge his services against Rome. I will fight/ Against my cank’red country with the spleen/ Of all the under fiends.

Under fiends is well said. Fiennes taps into the play’s tumult and violence (there is a lot of blood) to make a riveting dramatic film. Damn, Shakespeare knew what drama was all about! These days it seems that even films about serious topics fizzle out when it comes to packing dramatic punch. In Coriolanus Fiennes takes a good story and makes it more memorable than its mostly serviceable language and plot. Not since the depiction of the rise and fall of a similarly hard-hearted man in There Will Be Blood have I found myself so wrapped up in drama.
Posted by Richard Bellamy at 9:54 AM