Hannah – Past or Future? – The Non-linear Time Paradox in Arrival 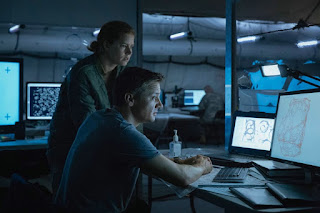 How refreshing it is to watch a well-made film that makes you think and compels you to view it again – which I did, and I plan to see it again. Arrival is the kind of film that stimulates examination and discussion – and one question I wonder about is whether Hannah is born BA (before the aliens arrive) or AA (after aliens).

Just about all the websites, YouTube videos, reviews, and chatlines I consulted say – and rather bluntly as though you’re an idiot if you think otherwise – Hannah is born AA – period – or, PERIOD!, as some posts put it. If we go with AA, then the opening scenes involving Hannah are presented out of sequence, which is kind of a gimmicky trick that cheats the audience into accepting, as most viewers would accept, that a depressed women seeing her young daughter is having flashbacks – not flashforwards.

Most of these sites that I consulted start with, “That’s the way it is in short story.” But this is not a strong argument because, we know, filmmakers love to adapt and “re-envision” their source material – often to the outrage of readers faithful to the source material. At least, filmmakers may not change the source radically, but they love to inject ambiguity. In my film course, I had young students who hated ambiguity. I love it!

For this film, ambiguity is all in keeping with the non-linear time paradox that is part of heptapodese – also in keeping with palindromic nature of Hannah’s name – which can also be read the same way backwards as follows: hannaH. Ooh, ah!

I have no problem placing Hannah’s life – from birth to premature death – AA or BA. I suppose AA needs no argument here since that’s “the way it is in the short story”! Also, toward the end of the film, it seems that Louise is learning that she can time-shift as part of comprehending heptapodese. Still, if we go with BA, Louise gets to time-shift when she goes ahead to the book-release party and she gets General Chiang’s phone number so she can call him in the film’s present and tell him his wife’s dying words – which prevents the Human-Alien War.

Still, still, if we go with BA, Louise also gets to use her new talent to shift into the PAST to answer her daughter’s question: “Zero-sum game.” She is also able to shift into the past and tell her husband that she knows Hannah is going to die prematurely. “I told him something he wasn’t ready to hear.” Also, also, alien time-shift vibes seem to have affected Hannah who draws the picture of Mommy and Daddy with the caged bird – which will happen in the future – which suggests that Ian – or a different scientist guy – is Hannah’s father.

Of course, it at first SEEMS clear that Ian is not Hannah’s father – he’s the father of a second child - because when Ian and Louise meet they don’t ACT LIKE they know each other, and references are made to Louise’s life BA as though he was not part of it: “I didn’t know you were married,” says Ian. “I just realized why my husband left me,” says Louise. But I think the filmmakers are being coy here. I think they are throwing in more ambiguity on top of the film’s mind-bending sci-fi premise – if you go total immersion with heptapodese, you will be able to time shift - because –

if we accept that Ian is not Hannah’s father BA, then why the hell does he say – in the scene in which Ian and Louise watch the alien shell disintegrate and then embrace – “Do you want to make a baby?” Wow, this is pretty familiar! Sounds more like something a formerly estranged ex-husband might say to his ex-wife after a bonding experience. This does not sound like what a guy would say to a woman before he’s even gone out on a date! They haven’t even kissed yet! Also, when they embrace, Louise says, “I forgot how good it felt to hold you.” Did I hear this wrong? Accepting Ian as Hannah’s father BA does not rob the film of its question regarding "would you still have your child if you knew she was going to die prematurely." AA, Ian and Louise may still have to face this dilemma.

None of this discussion is meant as criticism of the film. I love it. As a teacher of ESL, I loved their efforts to find a way to comprehend alien speakers and make communication as easy as possible. I love that the “weapon” is language! But I feel there are some loose ends – which I hope are not loose ends but intentional elements of ambiguity and paradox – because ambiguity and paradox are what the film is about in many ways.

Posted by Richard Bellamy at 11:42 AM No comments: