The Drama of Revelation - The Girl with the Dragon Tattoo 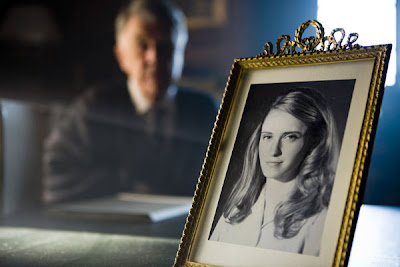 In Niel Arden Oplev’s sometimes derivative but often compelling murder mystery The Girl with the Dragon Tattoo, journalist Mikael Blomkvist (Michael Nyqvist) investigates the disappearance of sixteen-year-old Harriet Vanger back in the 60s. Harriet is a member of the powerful Vanger family, a dynasty of cutthroat businessmen and women who live isolated on a bleak, chilly island compound in Sweden – and most likely one of the Vangers is a murderer. Assisted by computer-hacking, research-ace Lisbeth Salander (Noomi Rapace), the young woman of the title, Mikael uncovers a sordid history of abuse and a series of gruesome murders of women. 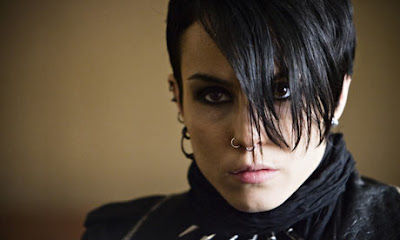 The theme of cruel misogyny is developed further in the intriguing character of Lisbeth. Lisbeth is indeed different. Her black hair cropped short, her nose and ears pierced with multiple rings, silver spikes jutting from her collar, she wears black leather, rides a motorcycle, and seems to be bisexual. Her entire back is covered with a dragon tattoo, but we never find out why. Lisbeth has been paroled from a mental institution for the criminally insane for her act of revenge against an abusive father; she, in turn, ends up abused by her parole officer; and the mystery investigated by Mikael and Lisbeth leads to the typical tale of the misogynist serial killer.

I enjoyed this film for its atmospheric setting on a frigid island in Sweden, its interesting Vanger dynasty of powerful business-people, and the off-beat character of Lisbeth, with her research talents and her firm resolve to take action against male predators, but I especially enjoyed it for its presentation of the drama we associate with a character seeing an important visual clue that leads to a crucial revelation.

Of course, Hitchcock is the master of the drama of the visual revelation, and his most classic moment of revelation, perhaps the best of its kind, comes in Vertigo when Scottie Ferguson (James Stewart) connects Judy's necklace with the one used by Madeleine and realizes that he has been the victim of an elaborate masquerade. 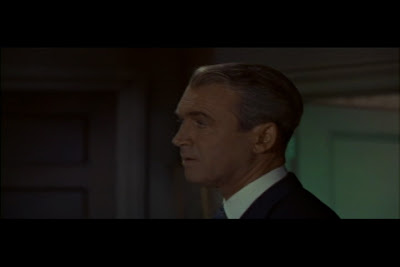 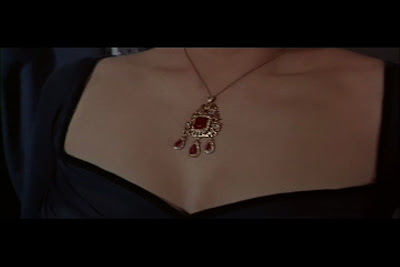 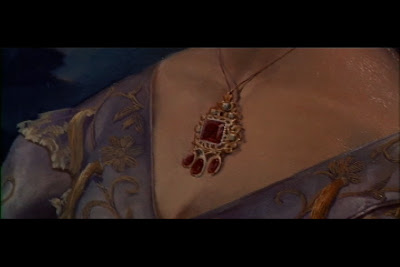 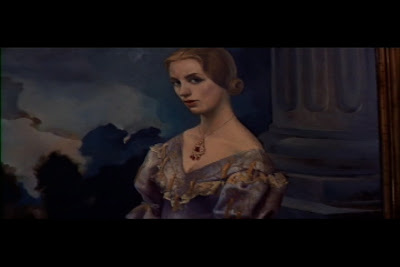 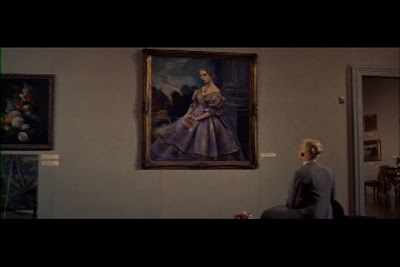 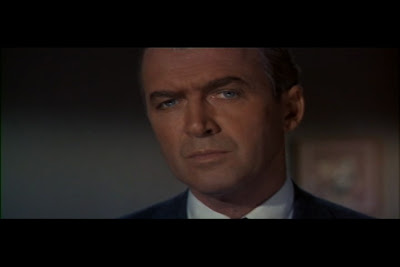 Like Scottie, Mikael takes on an investigation involving a beautiful woman and becomes obsessed with her. In Mikael's case it is Harriet, the grand-niece of Henrik Vanger, an old man still obsessed with the girl's disappearance forty years previously. When Henrik passes on the investigation to Mikael, he also passes on his obsession. Mikael becomes more and more involved as he looks over boxes and boxes of evidence collected by Henrik. The first revelation comes when Mikael finds a photograph in which Harriet is watching a parade and seems to be looking across the street in fear. Now Mikael must find a photograph taken from Harriet's point of view. Some nifty circumstances lead Mikael to a blurry photograph that doesn't reveal a suspect, but it is left to Lisbeth to make the final revelation that solves the mystery.

As in Vertigo, we the audience share in the drama of the revelations as the camera looks, and Mikael or Lisbeth looks, and we see the detail that provides the revelation. Of course, when a film involves a character looking at a photograph and seeing something suspect or revelatory, much is owed to Antonioni's Blow-Up (1966). Here there is no climactic revelation, but the drama of looking deeper and deeper into the evidence is ominously gripping. 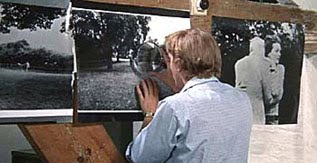 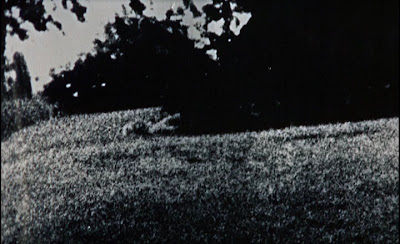 The drama derived from the examination of a photograph comes in part from the technical possibilities of photography. A photograph can be enlarged to reveal new details, and the new details may reveal a truth, they may reveal more mysteries, or they may reveal that the observers of these details - the character and the audience along with the character - are seeing more than actually exists. In Blow-Up it's never clear what Thomas (David Hemmings) reveals. Similarly, in Oliver Stone's JFK (1991), close examination of the grassy knoll image seems to reveal an accomplice. In The Girl with the Dragon Tattoo, Mikael seems to see a look of fear in Harriet's grainy face captured at a point in time forty years previous. Do we see that fear? That we might not see that fear stirs up doubts, and that adds to the suspense.

In films set around the present time, technology speeds up the whole process of revelation. In Blow-Up, the photographer can only produce larger and larger blow-ups that result in a grainy image that may or may not be a body. In The Girl with the Dragon Tattoo Mikael can use a computer to isolate Harriet's face, enlarge it, and clear it up. When he locates a photograph of what Harriet might be looking at from her point of view, ironically technology cannot clear up the face. We are left with suspense and a mystery that only leads to a revelation later on when Lisbeth connects a detail with another photograph.

One of my favorite films incorporating the photographic revelation is the 1997 British fantasy Photographing Fairies (great movie - problematic title), based on the 1920s Cottingley Fairy Hoax. Here, talented photographer Charles Castle (Toby Stephens) is asked to investigate photographs that supposedly reveal fairies. Well aware of the trickery of photography, Charles is skeptical at first. Then he notices a photograph that shows an intriguing reflection in a girl's eye. As in Blow-Up, he is driven obsessively to create larger and larger prints until the reflection seems to reveal ... something.

Films ask us to look. Faithfully, as viewers, we look at evidence in a mystery from the point of view of the protagonist. In The Girl with the Dragon Tattoo, what we see seems to begrudge Mikael a revelation as it has begrudged old Henrik a revelation for forty years. This starts the suspense. We want Mikael to keep looking so we can keep looking. Perhaps we feel that we might receive the enlightening revelation before he does.

Posted by Richard Bellamy at 11:15 AM

It's a fun mystery. I've considered reading the new novel in the series.

Hi Hokahey,
First, thanks for following my blog, such an honor!
Have you read the Stieg Larsson Trilogy? I saw The Girl with the Dragon Tattoo then went back and read the books. I have seen the first and second movies (both great, love Noomi Rapace). I found that, having read the books that the movies fell short of detail, always a problem that the film cannot cover everything- just ask Peter Jackson. I can't wait to see The Girl Who Kicked the Hornets Nest, though. I highly recommend seeing all three, especially if you liked the first. The story continues......

Jane at the Movies - Thanks for the comment. I really enjoyed the first Girl movie, but I was disappointed with the second one - though I've never been disappointed with Rapace's portrayal of a great character!

I have not read the books though I have considered doing so.

Again, thanks for visiting, and I just wanted to share a link to you a post I wrote a while back (before coming across your blog) that, right from the title, you will see is serendipitous.

Hi,
I absolutely loved that post. I have some understanding of what you and your wife live with and through with your daughter, though not first hand. My niece, my way-too-early late husband's niece if we are being specific, was born with cerebral palsy that affects her both physically and mentally. I have known her since she was 15 1/2. She is locked inside a world that no one can penetrate beyond a certain perimeter. I estimate that her "mental" age at around 8 or so. Her age now is 41. She is a fan of all things Disney. She lives for it. To go to Disneyworld is her ultimate vacation. She wants to live there. For her, I wish she could.

I am sure that you must be inundated with movies but please let me suggest a couple that your daughter might like: Space Jam with Michael Jordan, one of my favorites. I don't know if Who Framed Roger Rabbit will be too fast for her. Waking Ned Devine is one of my absolute favorites if you think it is appropriate for her. I just love that opening scene and the naked guy on the motorcyle is a vision! As you may have noted, I have changed my "nom de 'net" as my original one appears to have been originally taken. It is an apt one for me as I come from a rather large family.
Cheers and bless you.
2 of 7

Jane - Thanks coming back. Glad you liked the post. Yes, it's a challenge raising any child with any handicap of any degree. Cerebral palsy is a tough one. All things are relative, and we are relatively lucky because Jane functions at a high level and gets a lot of enjoyment out of life. She finished a program at the community college. She works at Stop and Shop. She is a pro on the computer and surfs the Net. A sad side is that I think she knows clearly that she is on the outside of mainstream. She knows what she's missing.

I find this very touching - "She is locked inside a world that no one can penetrate beyond a certain perimeter." I understand this. We are fortunate in that Jane is not removed from our world, but she likes nothing better than escaping into a Disney movie (there is a magic about those movies that speaks plainly to all people) - and she loves that her aunt lives in Santa Monica and we have taken her to Disneyland many times. Her favorite gift is a trip to Disneyland. And I never get tired of taking her because she is so happy there. Jane also loves pop culture and all the shows on the Disney channel - so I guess she's sort of locked in a teenage world.