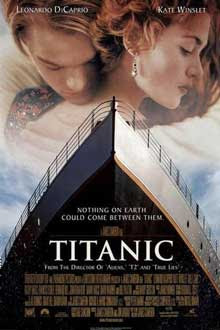 Watching James Cameron’s Titanic this past week, sort of as prep work for seeing Avatar, I was again won over by the touching emotional connection between DiCaprio’s Jack and Winslet’s Rose – once I got through the silliness: the wraparound story with Bill Paxton and other wince-worthy bits such as the “spit like a man” routine and Rose’s hand on the steamy automobile window – man, that’s a lot of steam! Also, being half English, the film’s anti-British bent kind of smarts. But despite the story’s failings, I was once again struck by how each gorgeous, meticulously researched image in the 1912 part of the film makes you feel like you’re really there.

Even though it lifts its story from Dances With Wolves, Avatar achieves the same sort of visual magic that transports you to a world you’ve never seen before. As soon as Jake Sully, in his surrogate blue body, goes on his first tramp through that fantastic jungle, I was sold. 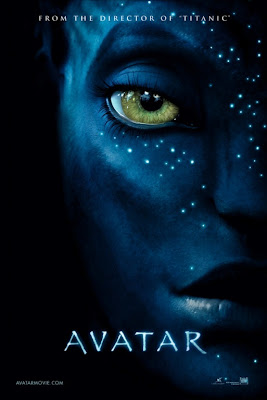 Yes, those clever South Park creators got it right: Dances With Smurfs - even though the Na’vi aren’t Smurfs. No, the Na’vi are exactly like the Lakota in Dances With Wolves: they ride “horses,” have a spiritual connection with their land, and kick butt when they need to. Though the Na’vi don’t cry “Hokahey,” any lover of Westerns has got to feel a thrill when they gear up for war against the paleface.

In spirit and content, however, Avatar borrows more from three other films. From The Emerald Forest (1985) it lifts the scenario of deforestation threatening an indigenous tribe’s way of life. As in The Mission (1986), whites side with a jungle tribe and sacrifice their lives to fight off white invasion. Also, when Avatar gets to that glowing, weeping willow tree and that hocus pocus about Eywa and the interconnectedness of all nature, I found myself thinking more of Princess Mononoke (1999) and its don’t-mess-with-Mother-Nature theme more than I thought of Lieutenant Dunbar’s adventures with the Lakota.

Although the film’s borrowings had me chuckling in the beginning, I forgot them once Cameron’s visual world turned on its dazzle. Avatar is at its best when Jake Sully (Sam Worthington) stays in the jungle with the Na’vi, learning how to shoot a bow and arrow or to connect the nerve endings in his pigtail with the nerve endings in a “horse’s” ear(?) so he can ride it, or with a fierce griffin-like flying creature so he can he can dive-bomb into the canyons of the floating mountains – the film’s most exhilarating sequence. 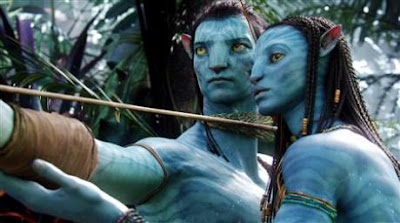 I wasn’t that impressed with Sam Worthington in Terminator Salvation. But here Worthington makes Jake Sully’s passion for his surrogate life with the Na’vi shine through his blue CGI disguise. In a touching, uplifting scene, Jake, a paraplegic, becomes irrepressibly giddy when he discovers he can get up and run in his surrogate body. Later, we feel his addiction to the world of the Na’vi, and I felt jarred by his nighttime breaks to go to the bathroom and eat scrambled eggs or whatever. I couldn’t wait for him to get back to Na’viworld. 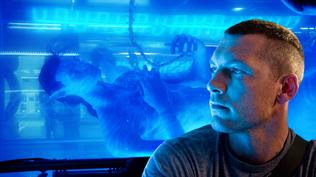 Cameron isn’t very imaginative when it comes to creating supporting characters. Here he simply taps into Aliens for which he created a whole platoon of G.I. Joes. As played by Stephen Lang, Colonel Miles Quaritch is the quintessential rock-hard army dude, hair cropped, muscles scarred, determined to lock and load and blow the flat-nosed blueskins away. I guess Wounded Knee is too far in the past for Quaritch and his men to feel any pangs of guilt for repeating sordid history. Quaritch is purely a cartoon character, but he arouses the viewer’s excitement for Indian-style payback.

Cameron also taps into Aliens for the character of the cold-blooded businessman Parker Selfridge played by Giovanni Ribisi. (Get it – Selfridge?) Here Selfridge’s heartless indifference toward the fate of the Na’vi makes Paul Reiser’s Carter Burke look like a reasonable entrepreneur. Sigourney Weaver as Grace Augustine plays the resident treehugger/Na’vi lover, frighteningly toothy in her CGI guise. But my favorite supporting character is tough helicopter pilot Trudy Chacon, played by the ever buff and sexy Michelle Rodriguez (loved the little slit in her tight white shirt). I just knew she would go helicopter-a-helicopter up against Quaritch. As for Zoë Saldaña, we never see her other than as a blue Pocahantas, but her savage grimaces and aboriginal body language communicate a convincing investment in her role as Neytiri. Love it when she growls. 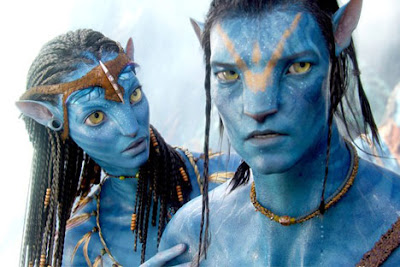 In the same way the horrid performance of Bill Paxton and Rose flipping the bird don’t diminish the spectacular visuals and the gripping sinking sequence in Titanic, Cameron’s storytelling weaknesses didn’t detract from my enjoyment of the dazzling, detailed world of Avatar: the jungle, its creatures, and the floating mountains. I’m not a big fan of CGI, but Cameron’s superior advancements in motion-capture technology and CGI – with the exception of Sigourney Weaver’s grotesque teeth and the scene in which hundreds of look-alike Na’vi sing around the Sacred Tree – have achieved a full-bodied, fluid reality for his characters and their actions. In the past, flying superheroes have looked flat and cartoonish. But Jake aboard his winged banshee looks like he’s really flying, and when he leaps on the top of a flying fortress, he doesn’t look like a pasted-on image. 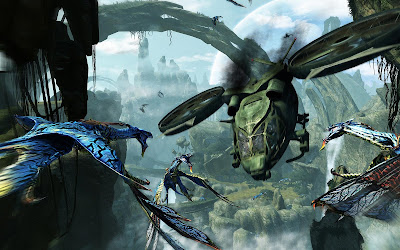 With Avatar we are in the hands of a skilled visual storyteller and Cameron’s triumph is the creation of a richly evoked world of fantasy and adventure.

Posted by Richard Bellamy at 10:00 PM

Man, it's so weird to look at stills from the film and see the animation. When watching the actual film, it all looked so real. As many problems as I had with the story, I will gush like a fool over the visuals.

I'm with you all the way on the CGI. The sitting-around-the-tree looked, well, bad - but only relative to the magic of everything else. I think the worst parts of Avatar looked as good as or better than the best parts of the LOTR movies.

Still haven't seen it in 3D, but am considering abandoning my 3D anxiety to do so. It's just always so much more distracting for me than in 2D.

Also, great call on The Mission!

Jake and Daniel - Thanks for the comments. It was certainly an eyeful - and the stills look like preliminary images not fully rendered compared to the final product.

Daniel - Funny you should mention LOTR because the scene in which Legolas stands on top of one of those elephant creatures looks so fake - and in Avatar, as I noted, Cameron presents the same sort of image - Jake on the top of the flying fortress - but it looks so convincing.

Tell me how the 3-D experience is. I got enough visual stimuli as it was.

Excellent review. It's nice to read someone who goes beyond the obvious "Dances with Wolves" comparisons and finds some original analogies ("Princess Mononoke," "The Emerald Forest," etc.) Like you, I'm not the biggest fan of CGI. But I have to give credit where credit is due and say that Cameron still uses it to serve the story rather than the reverse.

Thanks. Actually, once the film gets into all the hocus pocus about the Sacred Tree and the ritual that allows them to transfer a soul to another body and then the animals charge to the rescue - it struck me as such a Japanese anime view of nature.

As for the CGI - there's a lot that involves battle (which is the chief purpose of CGI in most movies) but most of it depicts a world we've never seen, and that's one of my favorite elements of film - the power to take me to a world I haven't seen before.

Oh, yeah. I got it. I also got Unobtainium. Ugh.

Alas, I cringed at the number of times Neytiri growls -- there's a racist non-whites-as-animals tone to it. But better than than Cameron's dialogue, I guess.

Yes, lots of cringe-worthy dialogue - but whenever a bad line came up, I just immersed myself more in the visuals.

Unobtainium is a term that has been used before - in actual scientific circles as a speculative substance - and in the film The Core, so it's not a Cameron invention.