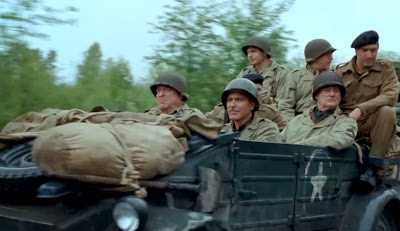 The Monuments Men, directed by George Clooney, is the silliest World War II picture I have ever seen. Each scene is flat, ineffectual, and totally lacking anything of interest to listen to or look at. I was struck by how the first three scenes established zero atmosphere, tension, or information.

To a cheerful, sprightly tune that sounds like a cross between the theme for Hogan's Heroes and the theme for Patton, Clooney, Matt Damon, Bill Murray, John Goodman, and others, cruise around German-occupied zones in war-torn Europe as casually as a bunch of good old boys on a road trip. Similar to Spielberg's silliest depictions of Nazis in his Indiana Jones films, The Monuments Men wallows in all the cliches. Themes suggesting malevolence introduce the Germans. The Russian officer racing to intercept the Americans saving artworks snarls like he has an itchy butt.

In one of the silliest scenes, John Goodman and his buddy drive a jeep into a meadow between hedgerows. When Goodman's character sees American soldiers waiting in ambush in the foliage and pointing across the meadow, he and his buddy realize they have stepped into the middle of a fight about to happen. Fine. Some suspense. Sad when the buddy gets riddled with bullets when the Germans open fire. Then Goodman's man drives away, and the American soldiers break cover and march across the meadow as openly as British soldiers at Bunker Hill.

I struggled to remain seated throughout the whole movie. It wasn't that I had any inkling of a hope that the film would get better. I was just fascinated by how bad it kept getting.

Wow! As I write the above, it is February 14th and I've only seen one movie in theaters! I'm going to the movies tonight, and I'll see at least one or two more movies before the end of February, but that's not as many as I usually see in a month! Guess I've been busy. Or the releases have been bad! 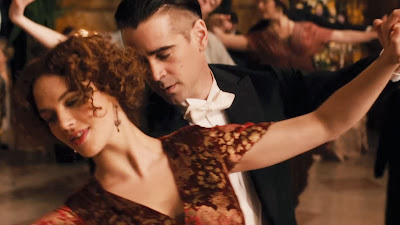 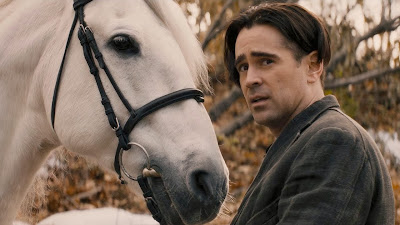 Winter's Tale is intended as a fantasy-romance taking place in an alternate New York City in the early 20th century where a white horse can fly and the demonic bad guy (Russell Crowe), whose face splits with fiery gashes when he grows wrathful, is the righthand man of Lucifer, played by Will Smith as a mild-mannered New York cool cat.

Fine. I can get behind a bit of dazzling magic and touching romance, but the story of the undying love between a thief (Colin Farrell) and an attractive young woman dying of consumption (Jessica Brown Findlay of Downton Abbey, fans!) is so slow, bland, stilted, and silly that it never dazzles, never touches your heart. In fact, the dialogue is so stilted that it seems like the actors are performing live and having trouble remembering what to say next.

But the film's most disturbing element is Farrell's hairstyle: a buzz cut on the back and sides with a thick helmet of hair flopping down like Three Stooges Moe's Hitler mop. Ee, gads, man! I wanted to reach into the screen, yank him out, and rush him to Supercuts! Not only does he torment his viewers with this tonsorial atrocity throughout the early 1900s portion of the story, but when he appears in present-day NYC, he's still got the same haircut!

There is no magic in the world that could save this movie! 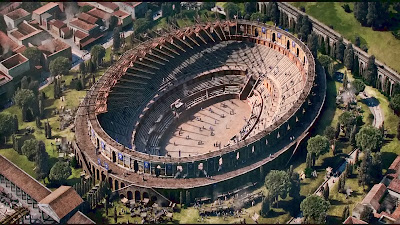 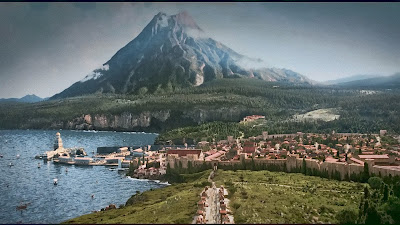 Paul W. S. Anderson (Resident Evil, Alien vs. Predator - the other Paul Anderson) delivers action, adventure, and visual spectacle in his swords-and-sandals-disaster epic Pompeii. The story moves expeditiously from the massacre of the family of a young Celt (Kit Harrington) in Britannia to gladiatorial games in Pompeii to falling in love with Cassia, a wealthy Roman girl (Emily Browning), to the machinations of an evil Roman senator (Kiefer Sutherland) – and after a few warning quakes and spouts of steam, the volcano doesn’t take long to erupt, right after the epic gladiatorial battle – just like in the classic film The Last Days of Pompeii (1935). The eruption of the famous volcano offers dazzling visuals – though the various stages of the eruption are timed to fit between segments of action involving Milo the Celt’s rescue of Cassia –and we get a dramatic variety of deaths by collapsing buildings, earthquake fissures, raining rocks, a tsunami-like flood, molten boulders, and the culminating pyroclastic (fast-moving wave of ash and rock) flow. (Actually, it was the heat 572 degrees Fahrenheit that killed most of the people.) This movie is all about entertainment, and the eruption of Mount Vesuvius is worth seeing. 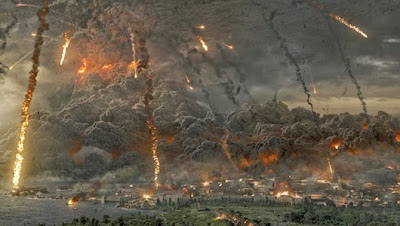 Posted by Richard Bellamy at 7:58 PM No comments:

Last year I posted on just about every movie I saw in theaters, shortly after viewing each. This year, my 6th year of movie blogging at Little Worlds, I plan to post a monthly review of all the movies I see in theaters. 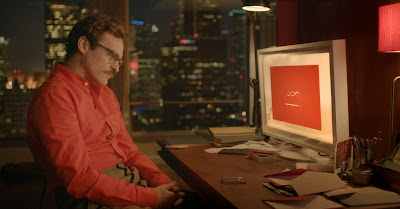 I really enjoyed Her, Spike Jonze’s poignant mix of fancy and romance with Joaquin Phoenix as Theodore, a lonely man who conducts a romantic relationship with his highly intelligent operating system, OS1 (voice by Scarlett Johansson) who calls herself Samantha. The film explores what constitutes love. Could you fall in love with someone who is just a voice? Well, considering that empathy, common interests, and listening are crucial elements in any relationship, I think it is totally possible. Without a doubt, I could fall in love with Scarlett Johansson’s voice. I also enjoyed the film’s very possible sci-fi technology: voice-control operating systems. Liked the scene in which Theodore downloads the snazzy-looking software. Love it when Theodore gets jealous about Samantha spending too much time hanging out with “other operating systems.” Yikes! Those other OS’s were studs!

Another 2013 release I caught was August: Osage County, the film based on the Tracy Letts play. It features a cast of many talented actors and actresses, though Julianne Nicholson as the sensitive middle daughter, Ivy, and Chris Cooper as Uncle Charles stand out over the histrionics of Meryl Streep as the pill-popping Violet Weston. Have to say that Julia Roberts did a good job – one of her best performances. While not as compelling or even as funny and wild as the play – a typical Lettsian romp into extremes – this film version of the Broadway hit offers some memorably touching and funny moments. “Eat the fucking fish, bitch.” 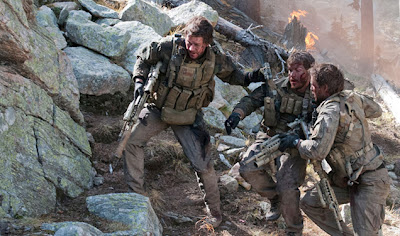 In Lone Survivor Mark Wahlberg plays a sole-surviving Navy Seal in a squad that gets into trouble in the mountains of Afghanistan. Taylor (John Carter, Battleship, Savages) Kitsch plays the squad leader; I really like him as an action hero. Three of the heroes are transformed by graphic, very bloody wounds and their crucifixion-like deaths into Christ-figures flagellated by their suffering in a war in which they have offered themselves up as sacrifices. The movie features gorgeous outdoor exteriors of rugged mountains and some gripping action, but it ultimately deflates due to excessive patriotic propaganda and a final firefight in which the film turns into a montonous shoot-‘em-up and Wahlberg’s bad acting gets in the way. 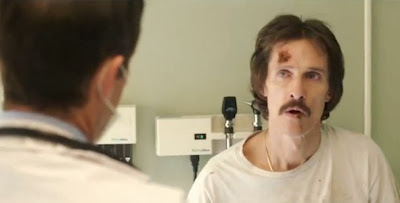 Dallas Buyers Club is a touching but disturbing portrait of a man dying of AIDS as he endeavors to avail himself and other sufferers of the unapproved drugs that might help them. Following in the bony fashion of Michael Fassbender in Hunger and Christian Bale in The Machinist, Matthew McConnaughey must have starved himself to play the emaciated Ron Woodroof whose desperate entrepreneurial drive extends his own life and alleviates some of the torture that other victims are enduring. McC. is superb as Woodroof, as is Jared Leto as Rayon, a transvestite dying of the virus. The scene in which Rayon dresses in a male suit to beg his bitterly disappointed banker father for cash is a subtle, superbly rendered scene. 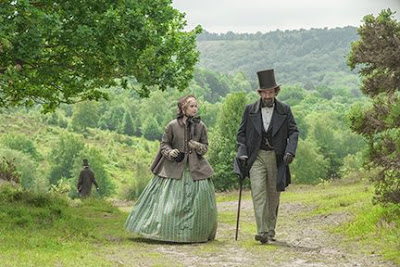 In The Invisible Woman, directed by Ralph Fiennes, Dickens comes to life, as portrayed by Fiennes, and Felicity Jones is perfectly cast as the young actress, Nellie Ternan, with whom Charlie carries on a clandestine affair during the latter years of his brilliant career. Though the relationship between Dickens and Ternan is not adequately developed, Fiennes’s performance and the rich art direction stand out as strengths. Fiennes invests himself heartily in the role of Dickens, showing how the gregarious genius encouraged parties to go on until 5:00 AM by captivating his company with his jokes, tales, games, and acts of mesmerism. The meticulously rendered sets and the palpable atmosphere transport the viewer as though by time machine to mid-1800s Victorian England. The film leaves you hankering to dive into a big fat novel by Boz. 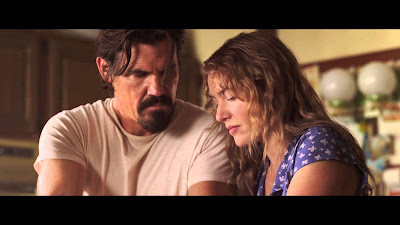 Jason Reitman makes Labor Day a tense, visually poetic (shades of Malick) drama about a benevolent escaped convict named Frank (Josh Brolin) who hides out in a house with willing hostages Adele (Kate Winslet), a manic-depressive, agoraphobic divorced woman and her insecure son, Henry (Gattlin Griffith). The fine acting and the memorable atmosphere are strengths here – and even though this may not be one of the best films of 2013, it certainly has one of the most memorable scenes, a sensuous and sensual episode involving Frank, Adele, and Hank making a peach pie. Wow! Makes you want to dash to the kitchen and make a pie! But writer/director Reitman should have allowed this central scene to stand in isolation, and should have settled on an ambiguous ending. Instead, he ventures into a cutesy happy ending that takes the peach pie element and turns it into the kind of device book publishers, looking for readers’ club darlings, love to froth over. 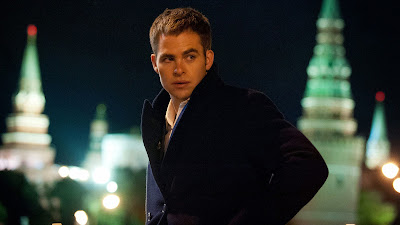 I guess I started off the actual 2014 movie year with Jack Ryan: Shadow Recruit. Top-heavy title, top-heavy acting by Kenneth Branagh, but very snappy direction by Branagh. Chris Pine as hot-shot CIA agent Jack Ryan and Keira Knightley as his gutsy fiancé drive the action throughout this been-there-done-that plot. But there are some genuinely suspenseful moments.

Posted by Richard Bellamy at 3:44 PM No comments: