"Go ahead! Communicate with my dead mother!" - Clint Eastwood's Hereafter 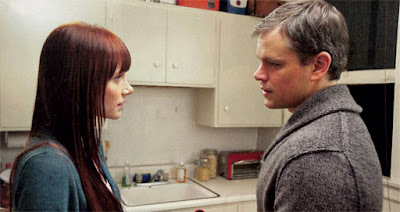 Back in the 1983 one day I was supposed to be scouring the streets of San Francisco in search of a job, but I ended up in a movie theater on Van Ness where I took in a matinee double feature that included Brainstorm with Natalie Wood and Christopher Walken. Here, Walken plays Michael Brace, a scientist who has paired up with cantankerous scientist Lillian Reynolds (Louise Fletcher) to develop a device that records what goes on in the brain. This is being picked up by a company that plans to record experiences and market the device as a way for people to jump out of an airplane or climb Mount Everest in the comfort of the living room. But the movie’s central theme is the hereafter, not virtual reality technology. When Lillian suffers a coronary, she straps on the headset and records her terminal experience. Much to the worry of wife Karen (Wood), Michael experiences Lillian’s journey into a bright realm of winged souls – impressive visual effects for the time – which proves that heaven exists!

I immediately thought of this entertaining sci-fi movie as I watched Clint Eastwood’s Hereafter, which also strongly suggests there is an afterlife, or perhaps that’s what Eastwood and all people in their 80s would like to believe. Knowing that my mother, 88, wonders and worries about what death has in store for her – even though she has been a faithful Catholic all her life – it is clear that Eastwood has chosen a sensitive and thought-provoking topic to explore in a film that should come off as grave and cerebral, but instead achieves a few touching moments within a whole that is mostly silly.

In Hereafter Clint takes his turn at telling a Crash or Babel-like epic incorporating multiple storylines in international settings.

In Sri Lanka a vacationing French TV-journalist Marie LeLay (Cécile De France) barely survives the tsunami of 2004, and her near-death experience and visions of a bright place populated by shimmering figures of people launch her into an obsessive crusade to convince the world, by means of her rapidly produced book: Hereafter, that the afterlife exists.

In London, twin lads Marcus and Jason (both played alternately by George and Frankie McLaren) suffer the stress of working hard as adult children, covering for their drug-addicted mum in order to keep the workers from Social Welfare at bay. If this isn’t bad enough, Marcus’s world crumbles when his brother is struck and killed by a car. This leads Marcus to Google psychics who attest to being able to communicate with the dead. Marcus’s quest slimly ties in the whole fascination with communicating with the dead, or debunking these communications, that occupied famous 19th and 20th century figures such as Arthur Conan Doyle and Houdini.

In San Francisco, the central character George Lonegan (Matt Damon) is hiding from the career he had made out of communicating with people’s deceased loved ones. George drives a forklift at C&H but has a passion for novelist Charles Dickens, whose novels show an obsession with death and a hopeful belief in life everlasting.

Of course, the harder George tries to hide, the more he is pursued by desperate, would-be clients. A loner, he risks responding to the enticement of Melanie (Bryce Dallas Howard), a young woman he meets in a cooking class. But when she learns of George’s talent, she can’t resist pleading for a reading, and her temptation leads from touching flirtation to heart-rending in the film’s best moment, in the film’s best segment within an episodic and sometimes disjointed film.

Matt Damon’s presence and his convincing performance work hard to strengthen the film with a substantial core, but this performance cannot save a poorly written story that explores serious issues rather shallowly and is further pulled down by some poor acting and some very silly moments.

For a Dickens lover – and that I am – George’s passion for Dickens is a nice treat, but the film never makes clear how this side of George’s character and the life of Dickens tie in with the theme of afterlife. When George escapes from his past by going on a vacation in London, we get an edifying scene at the Dickens House on Doughty Lane (I’ve been there!), and we follow George as he goes to the London Book Fair to watch Derek Jacobi (as himself) read a sample from his CD recording of Little Dorrit, but with so much Dickens woven into the story, there never comes a tie-in revelation or reflection upon Dickens's themes.

In his attempt to produce an epic about serious universal themes that is both deep and emotional, Eastwood comes up with something that’s as underdeveloped as the CGI renderings depicting the 2004 tsunami, which is thrilling despite the poor images, and the 2005 London bombings, which is thrown in to pump up the drama. The result is a string of vignettes, some touching, some silly, and as George, on vacation, and Marcus, pursuing psychics, and Marie, at the book fair of course, wander across each other’s paths in London, Eastwood delivers an ending of pure bathos that he had probably hoped would be intelligently significant.
Posted by Richard Bellamy at 1:30 PM

What bothers me most about the movie is that it raises all these questions about the afterlife and then drops them altogether just so the story can connect these three characters in the most random ways. The ending made me think that, apparently, many people died in a tsunami and a bombing just so a very morbid "Sleepless in Seattle" scenario could play out. We went through all of this to find out that George and Marie both needed a date?

You're right, Steven. There were interesting questions to explore in a profound way - but that never happened. Might as well have stuck with a sci-fi treatment of the afterlife - like Brainstorm.
SPOILER -
And what does that say about George's lack of risk-taking when he uses his talent to foresee them kissing BEFORE he gets up and goes over to her. Don't want to get rebuffed! He might as well have looked ahead to see if they end up in bed.

Most interesting, but I'll hold back anything further untilI see this film later today at my local Edgewater multiplex. I will say that I've soured on Eastwood as of late (couldn't take INVICTUS and GRAN TORINO) but I'll see what happens. Your views appear to be dead-on, sight unseen though. I'll be back.

Thanks, Sam. I was disappointed with Gran Torino, Invictus was pleasant and enjoyable, and I didn't hold high hopes for this one, but I'll give any filmmaker a chance. Tell me what you think.

Well, both Lucille and I fought hard to stay awake. This was ponderous, ludicrous and almost unwatchable after the first 40 minutes or so. After the spectacular opening tidal wave sequence the film tried its best to enter the Guiness World Book of Records as the world's "dullest" film. Damon showed up late, but was still largely ineffectual.

You've nailed it as far as I'm concerned, and I particularly like this:

"Knowing that my mother, 88, wonders and worries about what death has in store for her – even though she has been a faithful Catholic all her life – it is clear that Eastwood has chosen a sensitive and thought-provoking topic to explore in a film that should come off as grave and cerebral, but instead achieves a few touching moments within a whole that is mostly silly."

Sam - It's great that we solved the problem so that you can post comments! They are most welcome!

Even though I accepted the film as a silly venture, I did not start to nod off to sleep. Instead, I was kind of gripped, anticipating a dramatic payoff when all characters converged at the end, but as Steven puts it so well above, We went through all of this to find out that George and Marie both needed a date? What a disappointment!

Ha Hokahey! Well, I will make one confession, though in large measure I rarely nod off at any film. (My wife alas is another story) We saw thew film late on Sunday night after a particularly active day which included an early morning screening of an Ozu film in Manhattan and some serious walking. I wasn't in the most attentive mood, but I can't say my opinion would have changed much if I saw it in the morning.

Your praise for Damon is right on. It's incredible how compelling this film can be in the too brief moments that Damon is on screen. Otherwise, ugh.

it is clear that Eastwood has chosen a sensitive and thought-provoking topic to explore in a film that should come off as grave and cerebral, but instead achieves a few touching moments within a whole that is mostly silly...

Jason, thanks. Yes, I agree that this movie fails to fully realize anything, especially in its laughable final meeting between George and Marie in Covent Gardens. They might just as well have run toward each in slow motion!