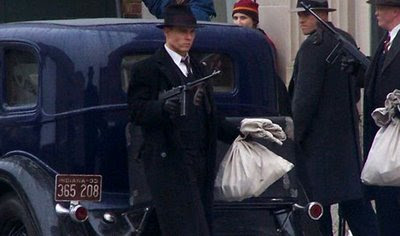 (Here there be spoilers.)

More than halfway through Public Enemies Michael Mann’s depiction of famous gangster John Dillinger’s last days on the lam, comes an expertly staged and filmed shootout and chase through the nighttime woods pitting John Dillinger (Johnny Depp) and his gang against the G-men led by Melvin Purvis (Christian Bale). The sound of Thompson machine-gun and shotgun fire is amplified into forceful booms suggestive of lethal impact. Gangsters are ruthlessly shot down. Dillinger and his friend John “Red” Hamilton flee through the dark forest. Baby Face Nelson, riddled with bullets, slumps to his knees, his Thompson spitting blinding flashes of fire that illuminate his death – the film’s most strikingly shot image. After escaping the shootout, Dillinger watches Red die. Dillinger is affected; he sees Red’s death as an ominous portent. But who is Red? We don’t know, and we aren’t touched by his death.

From the woods sequence, it is a short jump to the film’s climactic sequence in which Dillinger attends a movie while the Feds gather outside the Biograph theater, ready to shoot him down. This sequence is also masterfully composed and shot. I like how it cuts from portentous images of the Clark Gable/ Myrna Loy gangster movie Manhattan Melodrama to shots of the Feds waiting outside where amplified street noises create a gripping sense that you are there, and Elliot Goldenthal’s musical score repeats a swelling theme that suggests we have covered epic, dramatic ground to get to this infamous moment at the Biograph. Unfortunately, I didn’t feel like I had covered much ground at all with Johnny Depp as Dillinger. In fact, I felt like I hadn’t gone anywhere with him until the woods shootout and chase. Made up of disjointed vignettes that amount to very little – or sometimes present very little information – the first half of the film took me nowhere.

Marion Cotillard, as Billie Frechette, the coat-check girl who follows Dillinger for the thrill of the risk and the allure of his charm, takes you along with her from her very first appearance through her harrowing interrogation ordeal to the film’s final image of prison bars closing on her. She gives the film’s best performance, and she delivers the film’s best speech – when she describes how stupid the Feds were to arrest her and totally miss Dillinger who had been watching nearby. The cruel treatment of her is more shocking than any of the shootings, and that is a tribute to Cotillard’s sensitive treatment of her role. Some credit is due Cotillard as well for Bale's best moment in the film: when he compassionately carries her out of the interrogation room.

Another strong supporting performance comes from Billy Crudup as a slightly awkward, mild-spoken J. Edgar Hoover determined to establish a force of Federal cops. But one of my favorite characters is Charles Winstead, the no-nonsense lawman with the craggy face and the piercingly cold eyes. As played by Stephen Lang, he is a man of few words, but he exudes the toughness and ruthlessness of an Old West marshal tracking down outlaws in lawless Dodge City. In the light of his and Cotillard's wonderful performances, it is nice that they get to share the film's final scene. In addition, Channing Tatum with his winning looks is a clever choice to play Pretty Boy Floyd for his few seconds on screen.

As for the musical score mentioned above – it is credited to Eliott Goldenthal, but why does it quote verbatim from a theme from The Thin Red Line, composed by Hans Zimmer, at the moment during the opening prison escape sequence when a wounded man, held by Dillinger, is being dragged along by the getaway car? It also borrows musical lines from Terrence Malick’s film later in the movie. And another question – why the use of digital film that looks more like old-fashioned news-quality videotape than digital? I suppose it suggests 1930s newsreels- but it didn’t work for me.

Like Public Enemies, Andrew Dominik’s The Assassination of Jesse James by the Coward Robert Ford examines the last days of a famous American outlaw. But even without the backstory narration, Brad Pitt as Jesse James shows us who he is and how we should feel about him by what he does and by what we see in his trail-weary eyes. Pitt carries us along with him toward an assassination as well-known as the shooting outside the Biograph. In addition, major and minor members of the James gang, Robert Ford, Charlie Ford, Ed Miller, Wood Hite, and Dick Liddil, are clearly etched personalities, and we know who they are when they are killed or captured, unlike Dillinger’s cronies Baby Face Nelson and Red. As for Public Enemies as a whole, I enjoyed two masterfully shot sequences – the woods shootout and the Biograph shooting – as well as Cotillard’s portrayal of Billie, but I felt detached from and unaffected by the inconsequential vignettes that precede and connect these moments in Mann’s mostly ineffective film.

Posted by Richard Bellamy at 12:46 PM

Good thoughts. I agree with the idea that we get close to Dillinger all too late, and even then we're not that close. But this isn't unusual for a Mann film. As for Red, we know him as well as we know Hawkeye's brother in Last of the Mohicans. All that really matters in those scenes is that we know that these side characters matter to the main character.

As for the score, I don't see any difference between the way Public Enemies uses and credits its music and the way The New World credits James Horner while 'quoting verbatim' Wagner and Mozart in some of its most significant moments.

Overall, I'm still coming to terms with this movie and want to see it a second time. There's no question that it's one of the best movies of the year thus far, but at this point that says more about the lack of competition than the successes of this movie.

Thanks for the response. Yes, this film stands out because of the "lack of competition" more than its successes. I'd rather go back to see Mann's movie than any other film playing right now (more than some of the summer movies yet to come, I predict). It would be worthwhile going back to see if I still feel the same detachment.

Nice write-up, and I'm glad you singled out the scene where Bale breaks up the interrogation/torture of Cotillard and gently carries her out of the room. His finest and most tender onscreen moment in years, and perhaps offscreen too.

Thanks, Craig. Yes, that moment was almost astonishing. When Purvis comes into the room, I was wondering what he was going to do - so there was some nice suspense there. Bale certainly didn't show a tender side in Terminator Salvation.

I couldn't agree more with the scene in which Bale's Pervis puts the kibosh on the beating of Billie. That and the hunt through the woods made me start caring, and care I did.

I had to look away more times from that scene than any other bloody one and honestly thought with her backtalk and then final honesty that her "fat boy" interrogator was about to kill her in some unimaginable way.

Not only was the Pervis rescue a question in my mind because of his newly adopted hard ass techniques for rendering truth (the horribly painful pushing on a near dead man's face in the hospital), but his true compounded hatred for what mockery Dillinger was doing to his entire profession. I thought she was a dead woman. I was happy to see Bale's performance there.

However, it's moments like that in film that make me now need to read the truth. I want to know when and why Pervis ended his own life. Was it years of street wars? Psychological stress from killing and defending?

I'd love to know if someone has insight. While I loved Depp's performance and the good story-telling, I have to say I am processing the film wanting to know more about Pervis much in the same way I loved Tommy Lee Jones' Sheriff Bell in "No Country," and more so, Fugitive hunter Sam Gerard. While he never asked for donuts with little sprinkles on them, Pervis intrigues me.

Nice analysis, although the very things that you found lacking in the film intrigued me. I wonder if Mann left out the backstory of characters like Red (although he is prominent in the opening scene) because he was concerned that the audience might have found that too easy, predictable, and sentimental if he explained too much. The movie hints at lots of things--Baby Face Nelson's character, Alvin Karpis' kidnappings, and so on, but Mann does flesh out Dillinger's relationship with Billie. Mann gives us an elliptical slice of Dillinger's story, and I wonder if he made it that way to add some mystery and artistry to what would otherwise have been an obvious genre film.

Ghibli - Thanks for the comment. Yes, Purvis is a very intriguing character. I was shocked my the blurb saying that he killed himself. That might have been an interesting episode to include in the film, but I suppose that's another story entirely. But he is definitely conflicted - pressing on one guy's wound, saving Billie.

FilmDr - I missed Red in the beginning because faces seemed so similar - or maybe it was my fault. And I acknowledge the subtleties that you point out. You're right, Mann is trying to stay away from conventions - and he does a good job at that. Just, something was lacking from the film. Since, halfway through I felt detached - just watching randomly edited-together vignettes with little effect.

Jason - Thanks for the link to this post on your blog.

One last thought about your comment above. You say - "All that really matters in those scenes is that we know that these side characters matter to the main character." That's not enough for me - especially if a character practically dies in the main character's arms. I need to know a little bit more about the minor character for that scene to work for me. For example, a scene to show their closeness - horsing around or something - so that the death scene achieves some poignancy.