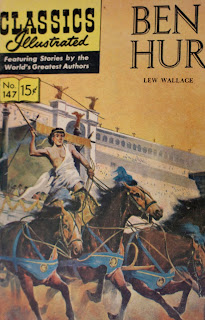 This Classics Illustrated version of the novel, published in 1958, includes all the iconic moments. It all starts with that darn tile falling. "That tile is still falling," Esther says in the 59er movie. Caused a lot of problems! 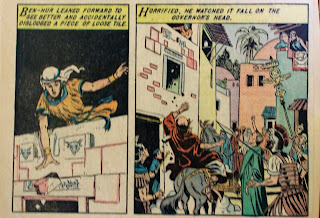 For not fixing his roof, gets Ben-Hur sent off to row with the slaves in a Roman galley. "Ramming speed!" "Your eyes are full of hate, forty-one!" Here is a curious case of a blatant anachronism (Romans didn't use galley slaves - what were you thinking, Lew?) turning into an iconic episode in the novel as well as in the film versions. 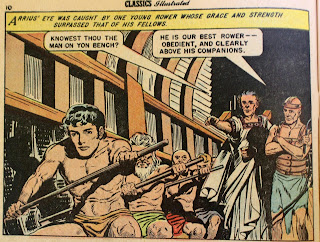 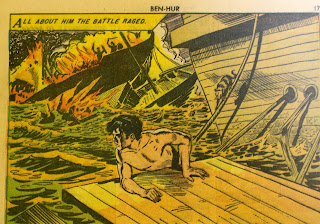 Then there's Jesus, looking like he belongs in a Christian fundamentalist brochure. He gives Ben-Hur that symbolic drink of water that Ben-Hur will attempt to repay at the end of the story. As Ben-Hur's conflicts play out, Jesus is headed toward his fated climax. Ben-Hur's life parallels that of Jesus. Both are the same age. While Ben-Hur seeks vengeance, Jesus preaches forgiveness.

The 59er film does a great job of presenting Jesus without showing his face. His face - that subdues a Roman soldier going to interrupt Ben-Hur's refreshing drink - are left to our imagination. Unfortunately, the mini-series casts as Jesus someone who looks like Graham Chapman in Life of Brian. The mini-series downplays the drama of the Crucifixion and the miracle while the 59er goes for visual spectacle, blood, and a tumultuous storm and earthquake during the culminating miracle.

Influenced by Gibbon's The Decline and Fall of the Roman Empire, all things Roman constituted an ongoing fad throughout the Victorian Era. Lew Wallace's novel appealed to that fad, and readers must have been thrilled with his description of the chariot race, the action scene that would epitomize the films. The Classics Illustrated Comic images evoke the speed and violence of that scene. 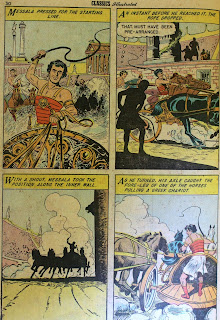 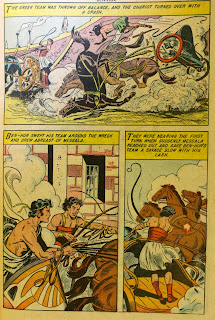 Indeed, as a boy, I did just that. It took patience getting through Wallace's detailed travelogue-style commentary and his descriptions of architecture and the culture of ancient Rome and the Hold Land, but the central conflict is always compelling. Now wonder Ben-Hur has been made into a spectacular stage play, a feature silent film, a sound film that won eleven Oscars, a British mini-series, and now an epic remake! It's a great story that explores the themes of vengeance, hope, forgiveness, and the importance of family.

Posted by Richard Bellamy at 9:07 AM No comments: 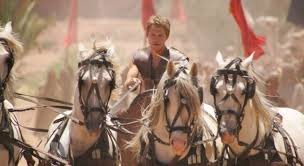 In anticipation of the August 19 release of the "re-imagining" of Ben-Hur, directed by Timur Babmembetov, my personal Ben-Hur-o-thon continues.

Watch the 2010 British mini-series version of the story! It's excellent and builds to an emotional finale. While it doesn't have the epic, broad scope of the 59er, this is an admirable, well-written, well-performed rendition whose big advantage is realistic location shots in the ksars and old buildings of Morocco. With more than three hours to work with, the mini-series builds in some re-interpretation of the story - Messala's father is a prick who pushes Messala in a power drive for the governorship of Judea - Quintus Arrius kills himself - Ben-Hur sleeps with a concubine - Ben-Hur's mother and sister do not have contagious leprosy; they just don't want Ben to see them like this. As often happens, however, the casting is largely Caucasian; Ben, Esther, and Jesus look as Jewish as Donald Trump. Sheik Ilderim, however, is played by a real Arab!

As for the classic action, the sea battle is done small-scale with three pirate ships pursuing Quintus Arrius's ship, but the encounter and sinking are gripping enough with dark lighting disguising the obvious CGI. The chariot race is realistically done without CGI - billed in the story as a small-scale affair appropriate to Judea - "the arm pit" of the Roman world. Visually, with its Moroccan setting and set decoration, it is very colorful. 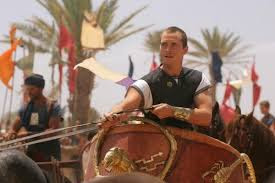 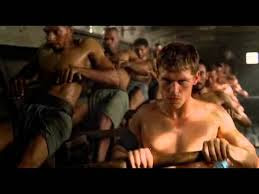 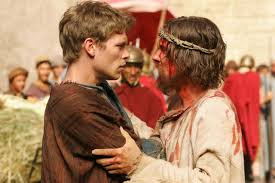 Posted by Richard Bellamy at 11:04 AM No comments: 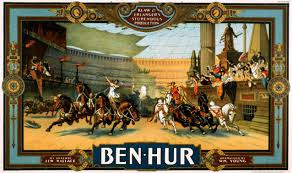 Ben-Hur: A Tale of the Christ was written by General Lew Wallace. It was published in 1880 and it became a bestseller, selling more copies than Uncle Tom's Cabin.

General Lew Wallace fought in the Union army during the Civil War. He flubbed things up at the Battle of Shiloh in 1862 by taking his division the long way around the barn and arriving late at the battlefield. In 1864, he redeemed himself at the Battle of Monocacy, near Frederick, Maryland, when he fought a successful delaying action against Confederate forces threatening Washington. After the war he led the commission that investigated the assassination of Lincoln and he presided over the war crimes trial of Henry Wirz, commandant of notorious Andersonville Prison Camp in Georgia.

His popular novel was adapted and produced as a stage play first presented in 1899. The spectacular London version was first performed in 1902. Both extravagant productions included hundreds of cast members, a sinking slave ship, and a chariot race with real horses, chariots on a treadmill, and a rotating backdrop to create the illusion of speed.

When I directed drama with middle and high school students, I toyed with the idea for a Ben-Hur stage adaptation. Wish I had done it.

This hilarious ad announcing a broadcast of Ben-Hur, on Turner Classic Movies is a wonderful parody of the 1959 film. At the same time, it shows how much fun a stage production could have been.


Posted by Richard Bellamy at 5:51 PM No comments: 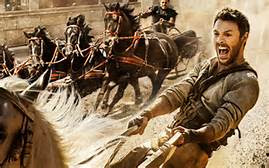 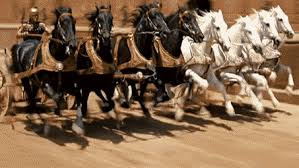 It was probably an urban legend, but the story goes like this. During the lengthy run of the 1959 hit film Ben-Hur in San Francisco, a Market Street wino used to hang out in front of the box office and take bets on the chariot race. I have a feeling he put his money on Messala - otherwise, who would take him up on the bet? I remember, back in 1960 as an eight-year-old lad who had been wowed by this impressive epic film, rather admiring the guy's fervent optimism and his feeling that the magic of film might work a wonder. Obviously, he knew Ben-Hur won the laurel wreath, but perhaps he believed that Messala might pull ahead and win in one magical moment.

As for which version of the film will win the laurel wreath, my fondness for the 1959 version of Ben-Hur does not mean I will be bitter or disappointed if Timur Bekmambetov's "re-imagining" is better than the previous version. I just want it to be a great movie - and I am behind it all the way. The 1959er was the first significant movie to open my eyes to the expansive magic of film. After a very poor spring and summer movie season this year, I yearn for a film that can put the "wow" back into moviegoing. (If a new Ben-Hur can't do that, nothing can.)

As a frequent moviegoer I end up seeing the trailers for the big superhero movies so many times I try to avoid them. Oddly, I have only seen the trailer for Ben-Hur once in the theater. Although I've only allowed myself glimpses of the preview, I must say it looks good. Admittedly, the 1959er starts out too slowly. For the new one, I see, they have added some land-battle scenes, most likely flashbacks to Messala's days as a budding centurion expanding the Roman Empire. Nevertheless, 1959er's excellent screenplay does the same thing as battle flashbacks, as when Messala talks about conquering Libya:

"A tremendous campaign. We met their armies on the coast, and after two days of fighting they fled. Then we marched on their capital. Barbaric city, but fascinating, or it was till we destroyed it. (Dramatic pause before the blunt punchline.) Now it's nothing but ashes." (I love it when this stark ending to his tale puts a damper on his luncheon with the Hurs.)

I look forward to what the "re-imagining" will do with the new version. I had always wished the 1959er had included a flashback to the developing relationship between the younger Ben-Hur and Messala. Esther makes a reference to the time the boys went out lion hunting and Messala saved Ben's life. A scene like this would have pumped up the beginning of the film. The new version has a prime opportunity to include the lion hunt! Hope it does! That would be much more interesting than a battle flashback.

Finally, as I've said, the new film looks good, and I know it will have lots of action. Here's hoping the chariot race is not extended into CGI boredom. Listening to the trailer, it is clear that the 59er is a couple of lengths ahead of the 2016er in the writing department. When galley admiral Quintus Arrius harangues the rowers, he talks flatly about the ship being like a body and the rowers being its blood. Nothing can top, "Your eyes are full of hate, 41. That's good. Hate keeps a man alive. We keep you alive to serve this ship. Row well and live." Indeed, there are many memorable lines that the 2016er will not be able to top. "What do you think you see? The smashed body of a wretched animal." Yes, the Heston Hur only features two major action scenes, but it has Messala's death scene - one of the most gruesome death scenes in cinema.

We shall see. I hope to see the new Ben-Hur at Downtown Disney in Anaheim on the morning of August 16 when I will be thinking of the lines, "This is the day, Judah. It's between us now." Indeed, on that morning, it will be between the two films, but I don't care which comes in first. I have a feeling I'm safe putting my money on the 59er, but I am open to being pleasantly surprised, and I look forward to any original elements that Bekmambetov might include.

For a lengthy discussion of the look of Ben-Hur I invite you to check out my older article posted for the 50th anniversary of the film.
Posted by Richard Bellamy at 10:26 AM No comments: