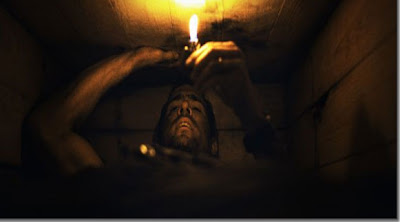 Buried starts out in darkness. We never see the ambush by Iraqi insurgents of the convoy that lands U.S. contractor/truck driver Paul Conroy (Ryan Reynolds) in a box buried under the sand, held for ransom and coerced to make a damaging confessional video to be placed on YouTube. Paul wakes up in darkness, comes to a realization of his predicament by feeling the wooden walls around him, struggles in terror, and then lights a cigarette lighter to confirm the horror. Buried alive! Right there the film plays on anybody’s fear, and it’s hard not to be engaged.

The artful camerawork does more in this single setting than you’d think possible. The inevitable extreme close-ups capture Paul’s anguish and frenzy as the camera looks over his forehead, angles across his cheek, or frames his full face, grimy and bloody, from above. In addition, the camera follows Paul’s point of view, down the length of his body to the foot of his confines, and along the wooden surfaces as he looks for… what? In a wooden crate, what could you possibly look for that might help you escape? Yet, we would all look. Amazingly, the film also employs extreme long shots, pulling back to show Paul enclosed in an underground rectangle of blackness, or following the walls as they extend metaphorically into a deep mine shaft that traps him below.

I’m not a big fan of Ryan Reynolds, and I never thought of him as playing a rugged, desperate character, but here he does a passionate job, using a cell phone left by the insurgents to listen to their demands, but also to connect with anyone who might help him. For anyone who hates making phone calls – and that’s me – it’s a case of phone call hell. Think of the frustration we feel when put on hold to the accompaniment of mind-sapping background music or when we have to deal with a bureaucrat speaking with a tone of official insolence that holds not the slightest speck of sympathy. Now imagine calls like that when you’re buried in a box and running out of air, and you get a good idea of how the film builds tension with dark humor and situations we understand.

For a one-man, single-setting show starring Reynolds, supported by voices ranging from the son-of-a-bitch robotic monotone of his employer from the contracting company (Stephen Tobolowsky) and the British-accented compassion of the agent (Robert Paterson) in Iraq trying to find him, the story is gripping and Reynolds keeps things moving as much as he can within his box while the off-screen voices suggest offices in D.C. or a field agent pursuing leads in Iraq in a beat-up Land Rover.

Though Paul’s world is a claustrophobe’s nightmare, Paul still has room enough to twist around (for the pacing of the film, this takes much too long) and lie in the opposite direction as he explores the confines of his box and collects quite a few possessions: his lighter, a flask of liquor, the cell phone, a pencil, a confessional script on a piece of paper, a clasp knife, the rags that gagged his mouth and bound his wrists, as well as two glow sticks and a clunky flashlight left so that he can light up the video in which he must state that he has been a naughty, decadent Western infidel, or something to that effect. Can he use these things to save himself? The possibilities keep you thinking along with Paul.

Despite its setting in Iraq and a negative portrayal of the contracting company bastard, the movie doesn’t seem to carry a message. From the opening credits that include animated lines turning sharp corners as they delineate a path to a nether region, and a musical score that is reminiscent of Inception and would suit any action-thriller, it seems clear all along that Buried is nothing more than a thriller – even an adventure.

IMPLIED BUT AMBIGUOUS SPOILERS AHEAD -

That’s okay by me. As an adventure, complete with intruding creature, the film is engaging. The viewer inevitably occupies his mind with, “What would I do in this situation?” That Paul doesn’t do what I would do (he’s buried shallow so that he can receive a cell signal) – or something else just as ingenious – falls short of how most adventures work, but this serves to increase Paul’s desperation and the tension we feel.

Ultimately, however, the film is no more than its gimmick – and that gimmick requires keeping Paul in his box. As the closing credits roll to the jarring clang and twang of a hillbilly love song (WTF!), it is clear that director Rodrigo Cortés and writer Chris Sparling play Buried as a joke on the viewer, not like one of Rod Serling’s more sadistic yet meaningful dark twists, more like a thoughtless full stop placed on a filmmaking experiment that is essentially meaningless. 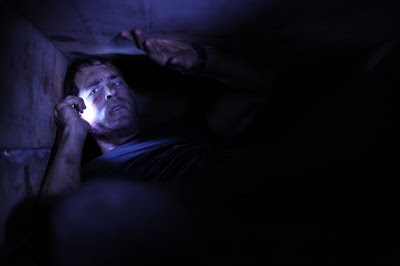 Posted by Richard Bellamy at 10:44 AM

Given your review, I'm amazed that the makers of Buried managed to sustain the "gimmick" as long as they do. The basic set-up reminds me of Vanished, where the last scene has a man waking up buried alive. That scene proves thoroughly chilling because the movie builds up to that image so well, and because due to his obsession over a lost girlfriend, he is in part responsible for the situation. Buried in comparison sounds like overkill, with only the different telephone calls to keep any kind of narrative momentum.

FilmDr - Your conjectures are right. That scene in Vanished is certainly more chilling. Once the initial impact is over in this movie, you're right, it becomes another cell-phone thriller - as much a tired device as the videos in the Paranormal movies.

Actually, it's The Vanishing (1988). My bad. Also, the fun buried alive scene in Kill Bill 2 comes to mind.

Yes, the scene in which she claws her way out of the grave in Kill Bill 2 was pretty gripping. In fact, digging one's way out of a grave is a scenario I rather like - happened in The Girl Who Played With Fire most recently.

"The artful camerawork does more in this single setting than you’d think possible. The inevitable extreme close-ups capture Paul’s anguish and frenzy as the camera looks over his forehead, angles across his cheek, or frames his full face, grimy and bloody, from above. In addition, the camera follows Paul’s point of view, down the length of his body to the foot of his confines, and along the wooden surfaces as he looks for… what?"

Indeed, I saw this claustrophobic film just weeks ago, and I came to same conclusions. I was all ready to dive in with Sluizer's terrifying THE VANISHING, but you guys understanding broached it here. As Poe related so persuasively in THE PREMATURE BURIAL, there is nothing more horrifying that the thought of being buried alive. This film finally fizzled near the end, but for most of it's running time it riveted. The sustaining devise of course were teh phone calls.

One question: Why didn't the lighter run out of fluid?

Yeah, I don't think I'll see this one. I like the scene in The Vanishing, which is short. And the scene in Kill Bill is so emotionally triumphant that it brings tears to my eyes (after the awesome terror). But even though your review suggests that Buried maintains the gimmick rather well, I just don't want to spend that much time in a box with Ryan Reynolds.

By the way, funny you mentioned The Girl Who Played With Fire. That scene could very well be the most preposterous of 2010.

Sam and Jason - Thanks for the comments.

Yes, the "resurrection" scene from The Girl Who Played with Fire is so unsurprising and unsuspenseful when it comes. Of course she's not dead! (I have no desire to see the third installment out now.)

Jason, I went into the movie worried about spending so much time with the usually blah and bland Reynolds, but I must admit he did a good job here.

Sam, as you say, it maintains its gimmick well. Yes, that was one inexhaustible lighter! Which leads me to all the FIRE that was going on down there! I thought all that burning must have used up most of the oxygen UNLESS there was air coming in somehow: down the snake burrow or down from above after the nearby air strike hit. And THAT made me think he was going to mole his way out, so I was disappointed when he didn't. That's where it diverged from adventure and ended with a sadistic joke on the viewer.

I have seen this show... whats its name? Oh yeah "The Vanishing". Anyone else starting to feel like Hollywood is struggling to come up with new material.

Ryan Reynolds proves he can carry a film even if it is just him in a box. Can't wait to see him in more dramatic roles. Good Review!

CMrok93 - Thanks for stopping by and leaving a comment. Glad you enjoyed the review. I was all alone in the theater watching this one; it wasn't a popular film. People flock to Saw movies but this was too much for them? This is a well-made, gripping movie, and Reynolds holds his own.