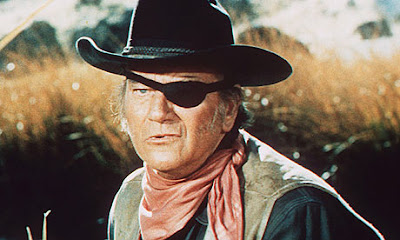 In the late 1960s John Wayne teamed up with veteran action-adventure director Henry Hathaway (The Lives of a Bengal Lancer, Call Northside 777, Garden of Evil, Nevada Smith) and performers Glen Campbell (What a quaint time the 60s was – that the likes of country singer Glen Campbell could be a significant audience draw!), Kim Darby (She was an unknown; but I remembered her at the time from her touching role as a young girl doomed to die in adolescence in the Star Trek episode “Miri” ), Robert Duvall – with the accompaniment of a rousing musical score by Elmer Bernstein (The Magnificent Seven) – to make a faithful adaptation of the Charles Portis novel True Grit. John Wayne’s performance as Reuben J. “Rooster” Cogburn, the overweight, alcoholic, eye-patched U.S. Marshall known for shooting first and asking questions later, won the Duke his first and only Oscar for Best Actor. Yes, he overacts at times. Yes, he deserved the Oscar for his superior performance in The Searchers or The Shootist - or both. But within this elegiac, beautifully-filmed Western adventure about vengeance and shattered innocence, Wayne performs in some memorably touching as well as hilarious moments, and the film is a dramatic look at a time in history when it was getting tough to be an outlaw – and just as tough to be a lawmen dealing ruthlessly with the ruthless.

When her father is murdered by drunken ranch hand Tom Chaney (Jeff Corey), fourteen-year-old Mattie Ross takes it upon herself to hire the shooting Marshall Cogburn to track down the killer and bring him back dead or alive. Mattie, a parsimonious, obsessive-compulsive “little priss” has a very tough and determined side to her. She tells the sheriff of Fort Smith, “I will not rest until Tom Chaney is barking in hell.” That’s a great line. And she’s tough enough to stand up to Marshall Rooster Cogburn, that “drunken gabby fool.” She gets what she wants when it comes to horse dealing, to the extent that it drives horse trader Colonel Stonehill (Strother Martin) to say, “I have just received word that a young girl fell head-first into a fifty-foot well… I thought perhaps it was you.” She also wants to accompany Rooster Cogburn on the manhunt, along with Texas Ranger LaBoeuf (pronounced La Beef) (Glen Campbell), in pursuit of Chaney for shooting a Texas senator off a porch swing. Thus, Mattie Ross embarks on the adventure of her life.

But it is an adventure that turns traumatic and robs Mattie of her youth. In her mind, it should be easy to catch Tom Chaney. Just ambush him on the road, beat him senseless with sticks, and tie him up. Her conception of the undertaking is like a kid’s game, like the play-acting she suggests for their first night camping out. But violence and death come abruptly and shockingly when they come upon a cabin harboring two men connected with “Lucky Ned” Pepper (Robert Duvall), the notorious outlaw Rooster “shot in the lip” once upon a time. When Moon (a young Dennis Hopper) threatens to give in and divulge what he knows, Quincy (Jeremy Slater) chops his fingers off with a hunting knife and stabs him before Rooster shoots Quincy. Blood and fingers everywhere, and that night as they wait in ambush for Ned’s gang, Mattie seems sobered by the ghastliness of death.

Alhough the first half of the film, filmed more claustrophobically in the town of Fort Smith, consists of sparring and joking amongst Rooster, LaBoeuf, Mattie, and the hapless characters who come in contact with Mattie's Puritanical rigidity, the exteriors of the second half of the film, with the grand and belittling Rocky Mountains standing in for the Winding Stair Mountains of Arkansas, sets the story in a radiant fall that suggests the declining of all things. Dazzling shots of brilliant yellow aspen leaves make it clear that winter is coming. The nights are cold. Youth and the day when a man like Rooster could get away with arresting someone without a warrant or killing someone without cause are waning. Young people can die, too – as seen in Moon’s death and in the death of fair-haired, “little boy Billy,” a member of Ned’s gang who came from a good family. Even the ruthless outlaw Ned Pepper, wonderfully played by Duvall as a snake-eyed, mean little man, knows his outlaw days are numbered. “I need a good judge.”

Overweight and short of breath (he had lost a lung to cancer), John Wayne is well-suited for his role as an indolent alcoholic. The eye patch covering his Civil War wound suggests a pirate or outlaw. Indeed, Cogburn’s sordid past is in keeping with the film’s look at the ironies of justice and injustice. During the Civil War, he rode with Missouri guerrillas. After the war, he robbed a bank in New Mexico. Cogburn is quite a character, and Wayne takes his portrayal of the shooting marshall into the realm of caricature.

But John Wayne's presence, as in most of his films, gives the film solidity, definitely buoying up Glen Campbell’s terrible acting by siding with Mattie and making the foolish Texas ranger the brunt of Cogburn’s jokes. When the Texan makes a mess of a wild turkey with a Sharps rifle, Cogburn observes to the disgusted Mattie, “Too much gun.” When the Texan ruins the ambush by shooting too early and hitting Ned’s horse instead of Ned, Cogburn concludes, “Well, La Boeuf, you’re quite a horse shooter.”

Kim Darby is not a great actress. When Darby plays scenes with Campbell, it’s a bit like watching poor high school performers merely reciting lines thinking about what they’re saying. But Wayne brings the best out of Darby, and together they develop a tender father-daughter rapport that embellishes three particularly poignant scenes. In two of the scenes, Cogburn tells Mattie of his wild and wayward life, and Mattie begins to see the good in him, getting over her prejudice that Cogburn is a despicable low-life, merely a tool for her to use to get what she wants. Later, she is significantly impressed when Cogburn faces four outlaws all on his own and boldly tells Ned, “Fill your hand, you son of a bitch.” What ensues is one of the most beautiful and thrilling long shots in the history of Westerns: Cogburn charging the four outlaws in a meadow surrounded by aspens bright with autumnal yellow. 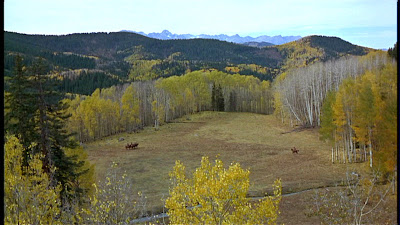 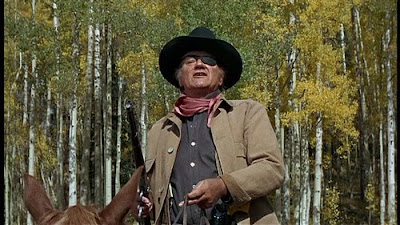 "Fill your hands you son of a bitch." 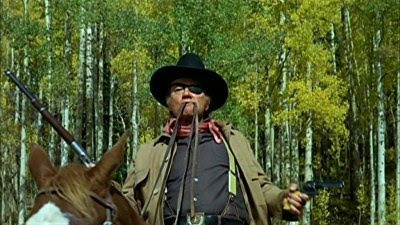 That said, I don't see the recent commentary suggesting that the Coens want to make their new adaptation of the novel more from Mattie's point of view - that the 1969 is all about Rooster Cogburn. Not so. The opening scene and the last scene are from Mattie's point of view. The first scenes of the film follow Mattie as she goes from place to place in Fort Smith inquiring into the death of her father and arranging his burial. We first see Rooster through Mattie's eyes as a mean cuss (he rough handles a prisoner) and a remorseless killer (he talks in court about his career shooting suspects). Throughout the film, as Rooster talks about his life, Mattie's condescending attitude toward this drunken lout changes to one of endearment and respect.

Wayne’s last scene with Darby is one of the most touching scenes in any Western. Mattie has narrowly escaped death, and she meets Cogburn in the family cemetery on her ranch to bid him farewell. Mattie’s offer of a place next to her grave suggests that Mattie doesn’t see normal womanhood and marriage as her future. Fall has faded; it’s winter now.

Standing in his classic Michelangelo’s David stance, one knee bent, Wayne as old Rooster is touched. He tells her that that place in the cemetery should be for her kin, and besides, he might be old, but he wants to avoid death as long as possible. Cogburn, the man of dubious morals, keeps plodding on in life. He has a new horse that can jump a four-rail fence. “You’re too old and fat to be jumping horses.” You’re wrong there, “little sister.” In the film’s final image, Cogburn does it. He jumps a fence, hat held on high. Cogburn moves on in life. Mattie stays behind, injured, mournful.

Looking Forward to the Remake:

So it looks like the Coen brothers’ remake of True Grit is in the filming stage. Although the original holds a special place in my heart because of my love for John Wayne and my nostalgia for the thrilling experience of seeing it in theaters upon its release, I am really looking forward to he Coens' take on the story. We need more Westerns. The cast looks great. Apparently, Jeff Bridges plays John Wayne; I mean Rooster Cogburn. I can’t think of a better choice. Matt Damon takes over Glenn Campbell’s role, and Josh Brolin plays Tom Chaney. Actually, Brolin would also make a great Ned Pepper. Relative newcomer Hailee Steinfield will play Mattie Ross. And you can’t go wrong with Roger Deakins (The Assassination of Jesse James by the Coward Robert Ford) in charge of cinematography. Oh, yeah, and the Coens direct.

I’m not going to miss it!

The Directors Joel and Ethan Coen 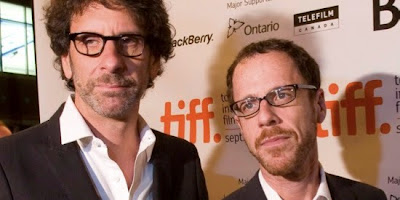 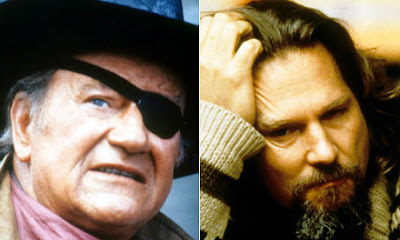 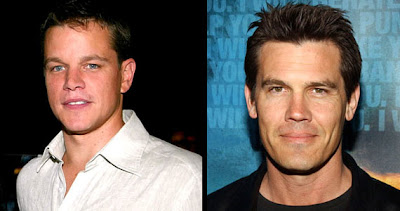 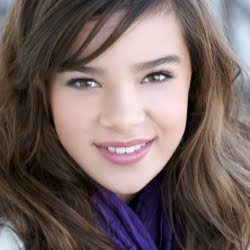 Posted by Richard Bellamy at 11:30 AM

I haven't seen this movie in a long time, but your description matches my memory. The Mattie character is certainly the biggest obstacle, but Wayne just has that special something that makes it worth the uncomfortable parts.

I don't quite know how to articulate this, but there have been many actors who could be the star of a picture. But Wayne had a way of kind of being the picture. Such a large presence, especially here.

Also, that screenshot before the "Fill your hands" moment underlines that realism is important. Just looking at that shot, you can feel the tension of the encounter. The numbers are just right: Can Rooster possibly make it out alive? Maybe. Maybe not. Today if anyone other than the Coens made the movie, there'd be 12 guys opposite Rooster, and they'd inexplicably charge him two at a time.

Thanks, Jason - you're right - Wayne's presence, his ability to bring out the best in Darby, and his delivery of some great lines does get the film through some rough spots. And the tension you speak of that is initiated by that long shot makes the final shootout on horseback one of my favorite scenes of all time.

Yes, we hope for a remake that avoids overkill. Actually, what I'd like to see the Coens do is set the story in the smaller terrain of the book's Arkansas setting with its Southern atmosphere of shabby hill-folk cabins in the Indian Territory and inject it also with a lot of the book's historical detail. And if they stay faithful to the book - the final shootout can only be as it was in the original film: Cogburn vs. four outlaws.

Thanks for the shout-out and the enlightening review, Hokahey.

Even given Wayne's iconic presence, True Grit still seems a bit sentimental for the Coen brothers. I wonder how they will adapt the story to their sensibilities. It seems far away from No Country for Old Men's bleak study of universal evil.

You're right. I can totally see where the Coens will be coming from. This movie IS sentimental and - thinking of A Serious Man - the Coens ain't sentimental. But there is some bleakness in True Grit - enough to give the movie some depth but not too much that it alienated audiences: it was a very poplular movie and did very well at the box office.

The Coens don't worry about going for the bleakness - which I have no problem with. I'm a big Cormac McCarthy fan - enough said. But the movie pretty much adapts and includes everything that is in Portis's very short novel - and there's not that much left to make the story bleaker - except for a few details about what happens to Cogburn and Mattie after the manhunt is over.