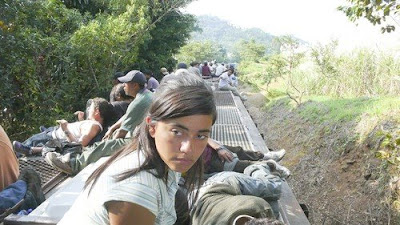 Imagine traveling hundreds of miles along the length of Mexico, from Chiapas to Texas, on the top of a freight car. I am told that my grandfather, a German immigrant to Canada, rode the tops of freight cars from harvest to harvest during the Great Depression. He lined his clothing with newspaper against the cold. How dangerous, uncomfortable, dirty, hot, wet, and cold this must be is what Cary Fukunaga’s Sin Nombre effectively gets us to feel as it depicts the ordeal of Sayra (Paulina Gaitan), a Honduran girl riding the rails toward Texas with her father and uncle, whose journey becomes entwined with that of Willy/ El Casper (Edgar Flores), a Mexican fleeing his connections with a ruthless street gang in Chiapas. Willy’s gang is so ruthless that initiation into the gang involves a thirteen-second beating by all the other gang members, and after a captured rival gang member is shot by Willy and a young initiate, the dead man’s guts are fed to the dogs.

In the same way the epic train trek in Doctor Zhivago depicts the cold and filth of the journey for displaced Russian families, Sin Nombre follows the hazards of fortune of desperate emigrants hoping for a better life in the U.S.A. – if they can get there. The film beckons you to experience the grime and discomfort. The journey is marked by curious episodes along the way. As the train passes one slum, children show their sympathy for the travelers by tossing up oranges. Along another stretch, the children throw rocks. When the train passes a mountaintop shrine, the travelers summon the energy to kneel and pray.

Deft, artistic cinematography transform the train into a monstrous entity that has the power to provide death or deliverance. As the seething machine pulls into the station and refugees scramble for places on the tops of the cars, we feel we are witnessing a grand epic. But the epic story ultimately shrinks to focus on Sayra’s miraculous compassion for a young man with a brutal past. Their moments of closeness are touching, but they seem more contrived to provide us with relief than they are believable. As Sayra and Willy head north, evading pursuit by vengeful gang members, Willy’s fate is predictable. Sayra’s fate is simplified and left completely up to our imaginations. Sin Nombre is visceral, shocking, and touching, but the drama is better when the film stays with the desperate vagabonds and the lumbering, unfeeling vehicle of their dubious destinies.

Posted by Richard Bellamy at 7:22 PM

Nice review. Along the same track, so to speak, my film class has been enjoying Buster Keaton's The General, and your description of Sin Nombre also brings to mind the train travels in Slumdog Millionaire. My favorite Bond film is the train-heavy From Russia with Love. When one thinks of Hitchcock's Strangers on a Train and The Lady Vanishes, one could say trains and cinema do go together well.

FilmDr - Thanks. I agree. I've contemplated doing a post on trains in cinema, but if you get there before me, I'll be happy to provide comments. I love trains in movies. You mentioned some great ones - and I'm so glad I embraced The General after much inexplicable resistance. It's a great movie. Trains in Westerns are especially thrilling - The Wild Bunch - any movie about Jesse James - and the best sequence in How the West Was Won. I loved the train travel in The Darjeeling Express. Of course, I hope you've seen Frankenheimer's The Train. What a beautiful war movie!

We've already talked about this movie a bit, but reading your review, I agree with you even more that Sin Nombre would have benefited from "stay(ing) with the desperate vagabonds and the lumbering, unfeeling vehicle of their dubious destinies." I wish the whole film would have been the train and nothing else. I think it would have narrowed things down but been more wide-reaching.

Fox - thanks for the comment. Yes, the train journey was relatively new and refreshing - and the gang scenes, including the pursuit of Willy, got too much into familiar territory.

Anyway, I'm glad I saw this movie. I had seen Obsessed that weekend and I felt I had to see a decent movie that same weekend to expunge the bad taste in my mouth. And that's where my reaction to the "chic factor" - which you discussed in your post and to which a number of people responded very extensively - comes in. I wasn't bothered by the "chic factor" when I saw Sin Nombre - because when you come from seeing a movie like Obsessed - you'll lap up the chic factor like cream.

I was glad, though, that the chic factor was not accompanied by another irritating indie element: the mournful twang of the electic guitar - which seems to be the central tune of many indie musical scores. Have you ever noticed that?

Now, having seen Wolverine this past weekend, I'm ready to be tolerant of the chic factor again.