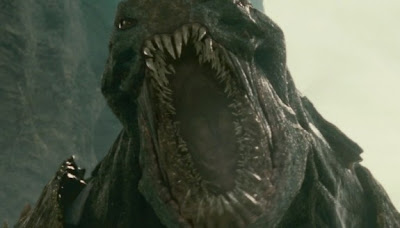 Ray Harryhausen did his best stop-motion animation sequences in the Greek mythology epic Jason and the Argonauts (1963), which features his masterpiece: Jason’s combat with the skeleton soldiers of the Hydra’s teeth. The film also includes an impressive multi-headed Hydra, flying Harpies, and Talos, a bronze giant. After Jason, Ray should have rested on his laurels or stayed clear of Greek mythology. His tired, lackluster stop-motion animation for Clash of the Titans (1981) does little to rescue the film's forgettable action and its dull acting.

Is the 2010 remake, Clash of the Titans, any less tired, lackluster, or forgettable? A lot less, in my opinion. I rather enjoyed this modest entertainment. I enjoyed its age-old story that is still relevant today in its depiction of humans questioning "who's in control up there." Here, humans complain about life's injustices and defy the gods. The gods get angry. The gods wreak havoc. Liam Neeson plays Zeus as a wrathful but ultimately warm and fuzzy Gandalf, coming down to show his love for his half-mortal son, Perseus. As Hades, Ralph Fiennes is not nearly frightening enough. The rest of the gods and goddesses sit around on white plastic pedestals that make them look like board game tokens. They give advice to Zeus like, "You must reach out to them more," and they vanish in a poof when Zeus wants to talk privately with brother Hell.

Meanwhile, Demi-god Perseus (Sam Worthington in vengeful Jake Sully mode) leads a ragtag group on a quest. What’s a Greek myth without a quest? Their job is simple. Find the blind witches that will guide them to Medusa, lop off Medusa’s head before she can turn them to stone, and use said head to turn the Kraken to stone before it destroys Argos, or before the fearful citizens of Argos sacrifice the fair Andromeda to the beastie.

I know, the Kraken belongs to Norwegian legend. In the original Greek tale it’s a sea monster called the Ketos, but “Release the Kraken” sounds a lot better than “Release the Ketos." Greek mythologic fact is stretched further by inserting Io as Perseus's love interest. Even though Andromeda (Alexa Davalos) is supposed to end up with the big hero, it's nice having Gemma Arterton to play Io as a gorgeous but capable sidekick while Andromeda is occupied with being a human sacrifice for the Kraken.

You'd think a movie like this would be bloated with CGI beasts, but it's not. The questing characters spend enough time set against beautiful natural settings - all this without computers. Locations in Tenerife and Wales offer stark volcanic formations, rocky coastline, shadowy forests, and brightly green fern glades.

In one of these ferny glades Perseus first sees the Pegasus in a small herd of Pegasuses, and with CGI wings attached to real horses, they constitute a nice image in their green forest setting. If I said, "You'll believe horses can fly," you'd think I was quoting some advertising plug, but the creature is quite believable, especially during the Pegasus's flying, galloping ride through Argos.

Finally, when Perseus and his fellow questers need to take up arms against gigantic scorpions, Medusa, and the Kraken, the CGI results are nicely convincing. The Kraken makes a big deal of rising from the sea only to look too much like the creature from Cloverfield and get vanquished rather easily, but the battle with Medusa, that sexy lady turned by Athena into a reptilian bitch with snakes for hair and a gaze that's literally petrifying, provides some gripping action and memorable imagery. It's a costly combat for Perseus and his chums, one that makes you want to cry out, "Don't look now!" 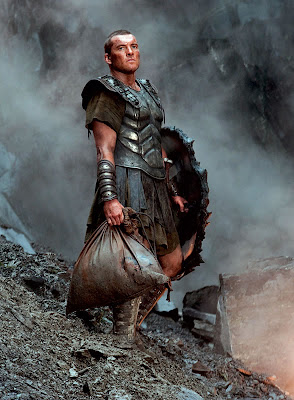 Posted by Richard Bellamy at 5:35 PM

Fine. The Medusa thing sucked, though.

But I liked Medusa! She rocks! (Sorry, couldn't resist the pun.)

I thought the Medusa sequence was the best part, well done. Also, I want to see more movies with Gemma Arterton she is so beautiful.

Tom - Thanks, I'm with you on the Medusa sequence. Also, Arterton is in the upcoming Prince of Persia. Movie looks silly but fun ... and then Arterton gives it that extra draw.

I can see why you kind of enjoyed Clash of the Titans. It worked for me ironically, and sometimes I can take more pleasure in an earnestly cheesy bad film than a pretentious one that thinks it is good. I found the metaphysics of the movie bizarrely nonthreatening. What is there to fear from the Gods if Zeus keeps supplying Perseus with useful stuff? How do prayers enhance the God's immortality? It seems to me that you are either immortal or not.

FilmDr. Thanks. I went with this film because it seemed to flow without any nonsense and it didn't get bogged down by bloat.

I don't know why the gods need anything; as you say, they're gods. Guess they like the attention. But the Greek myths really show how human the gods are. Zeus goes around ravishing women. When he's angry, he throws a lightning tantrum. So I guess that makes him a needy fellow. He wants allegiance from those humans down below. And how dare they topple his colossal statue!

And it's also interesting that here it is 2010 and we still get a kick out of the Greek myths. They're great tall tales full of blood and passion.

Writing a review of "Clash of the Titans" is like writing a sports article about a tee-ball game.

In my oh-so-humble Ksar Souk opinion.

Yuba Guy - Uh, thanks for the comment. Have you seen the movie? Actually, most anything that someone has created is worth writing about.

Hokahey, I'm pretty much with you in that I mostly enjoyed Clash (and certainly more than I expected to), but I can actually see where Yuba Guy is coming from (and I think it's a bit of a compliment, too). Your review seems almost too worthy of the film it's looking at, which isn't to say that the film is devoid of artistic merit (in fact, there is indeed quite a bit going for it in that regard), it's just that I felt it pretty empty overall, and though it might have a little to say about men vs. gods, it's more content with being a solid if unspectacular actioner than anything deep enough to spend more than a few brain cells over.

Also, I'd agree mostly with our comments about the CGI, but am with others when it comes to Medusa (herself more than the sequence). She looked pretty crappy for a film of this magnitude and budget.

Fletch - Thanks for your observations. Yeah, I guess I might have been a little overly praising of the film, but I like to give credit to a film that entertains me during a doldrums period that seems to offer so little to see and enjoy. Yes, vapid it was - but I enjoyed it visually.

Your defense of Y. Guy's comment is well taken. What he says is true. It's a very minor movie. As for the implied compliment, I guess I didn't see that.