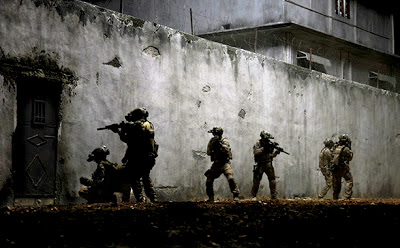 Zero Dark Thirty starts with a black screen and the tragically familiar sounds of 9/11: sirens; air traffic controllers; clueless newscasters; screams; desperate calls to 911. Director Kathryn Bigelow knows that these sounds are enough to recap the events of 9/11 because we have all SEEN it on television as the though the tragic events had been immediately made into a movie.

Now we have Zero Dark Thirty, a film that intends to show the climax to the epic true story that began on 9/11, shifted location to Afghanistan, then to Iraq, and ended on May 2, 2011, with the death of Al Qaeda mastermind Osama bin Laden, an incident coming at the end of a ten-year CIA search. Is this a climax we wish to see? Can the killing of this mastermind, without benefit of trial, provide catharsis for the deaths of thousands when the men who directly killed those victims died on 9/11? Perhaps not, but the film asserts that ending bin Laden's life can save people from future terrorist attacks, and that makes killing bin Laden a gripping imperative.

If anything, if one considers the acknowledgements at the end of the credits that pay tribute to the men and women who dedicated themselves to the war against terrorism, the film is more about brave Americans performing heroic deeds. "Do you even realize what you just did?" one Navy Seal says to the shooter who takes down bin Laden. Later, the shooter lets loose the kind of "all right!" utterance that is an ubiquitous trope of the Rambo-style military action film. Indeed, a Rambo-style film about the killing of bin Laden would satisfy the many Americans who honored the victims of 9/11 by fastening American flags to their pickups and flapping them into pathetic tatters. Bigelow's film only seems to be that kind of film momentarily and it offers hardly any visceral charge that might incite the virulent bin Laden-hater to utter, "All right!" because you never see bin Laden's face, and his death is a fleeting image that is very easy to miss. The college students and professionals filling the AMC Boston Common 19 where I saw Zero Dark Thirty were totally silent throughout the entire film, especially during the raid on the compound..

Is the film dispassionate history? For the most part, it seems to be.(The meticulous reconstruction of bin Laden's compound certainly attests to the film's historical accuracy.) Watching Zero Dark Thirty, I thought readily of Fred Zinnemann’s The Day of the Jackal (1973). In Zinnemann's thriller, the fun comes from watching the investigators tie together the leads and suspects until they get closer and closer to the enigmatic assassin. The thrill is following how the investigators do what they do: finding a person without an identity, with the thrill compounded by following how the assassin does what he does: trying to assassinate Charles de Gaulle. Similarly, Zero Dark Thirty moves through titled chapters that chronicle the phases of the manhunt. Meanwhile, we are fascinated by how CIA operative Maya, played by Jessica Chastain, puts two and two together and finds an obscure man with multiple names, a courier, who can lead them to bin Laden's hideout. (A humorous fact thrown into the suspense is that this courier is found out because he faithfully calls home to talk to his mother.)

If what the CIA says is true – that the discovery of bin Laden’s whereabouts was not the efforts of a single agent but the cooperative effort of multiple agents – then Kathryn Bigelow’s film is also a tale of female empowerment, with a woman cast as the central figure in a manhunt of monumental proportions and significance. With great talent, Jessica Chastain rises to the challenge of her role and convinces us that Maya could be the key mover in this prodigious operation. In addition, Chastain does a masterful job of keeping us interested in a character we know nothing about. Why did Maya become an agent? Does she have an emotional investment in this case? Did she lose a loved one to 9/11 or is she just a zealous patriot out to do her duty? Is she married? What are her pastimes? She eats peanut butter on toast as well as an all-American lunch of burger, fries, and Coca Cola in the Langley cafeteria. She is certainly a hard nose, and at one point I saw her as a CIA version of Ann Coulter when she says Pakistan is “kind of fucked up.”

Despite not being able to connect with Maya on an emotional level, we may well admire her determination and confidence. One particular Navy Seal feels he can trust “her confidence," and Chastain exudes that determination and confidence. She is so determined that she works her way through an initial squeamishness with torture and humiliation. Later, she pluckily calls herself a "motherfucker." Because it is totally clear to us that she is tough and determined, we don’t need to see her repeatedly go up to her division head's office with a whiteboard marker and scrawl a different number on his window as the days of inactivity mount. We might rather have Maya deliver an inspiring, patriotic speech, but her longest speech in the film is a trite get-the-job-done exhortation.

Unfortunately, when Maya's job of finding bin Laden’s hideout is achieved, Chastain has little to do but lurk about, making sure something is going to be done about her discovery. She even watches as the Navy Seals fly off in their Black Hawks to do the deed. But she doesn't have to lurk long because the decision to go ahead with the commando raid comes suddenly, and the film shifts to a mini movie within the movie as we follow the helicopters flying low through the rocky gorges of the Hindu Kush (my favorite shots in the whole movie). So we leave our main character behind, and we watch as the Navy Seals land and slowly make their way into bin Laden's compound in a sequence that is taut and ominously suspenseful.

After the job is done and bin Laden is dead, Maya gets to go home, but we never get to find out where home is. On a plane assigned to take her to any destination, she is overwhelmed by emotions before she can say where she wants to go. She cries, but we wonder why she cries. Is she just exhausted and relieved? Does she feel remorseful? Or does she feel that the whole thing was for nothing? Killing bin Laden will not bring back the many who died on 9/11. And who knows if bin Laden’s death will stop future attacks? The Abbottabad sequence seems to echo a number of conflicting questions. The Navy Seals leave dead women, traumatized children with faces streaked with tears, and pools of blood, but one of the soldiers utters a gung ho cheer and the other men don’t seem to have a qualm. As a tale of female empowerment, as a dispassionate procedural thriller, as a historical documentary, as a tribute to the men and women who found and killed a criminal responsible for masterminding the deaths of thousands of Americans, Zero Dark Thirty is a well-made entity. Although slow to start, the film builds a relentless momentum as we get closer and closer to the promised event, and Chastain's performance and Bigelow's direction leave us room to decide on our own how we feel about that event.
Posted by Richard Bellamy at 8:26 PM