"How can you not be romantic about baseball?" - Moneyball 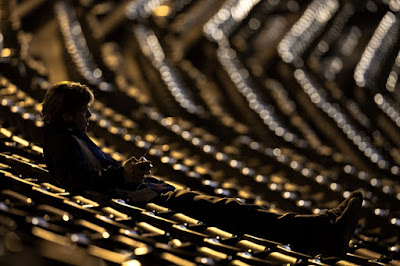 “How can you not be romantic about baseball?” This is what discouraged GM Billy Beane (Brad Pitt) of the Oakland A’s says when his unlikely assistant manager, Peter Brand (Jonah Hill), a Yale graduate who uses statistics and calculations to find capable undervalued players at the lowest cost, shows him an endearing video in which an overweight player hits a high ball, gets to first base, falls in an attempt to round first, and ends up scrabbling for the base on hands and knees, only to learn that he has hit a homer. Brad Pitt's Beane seems to send the question in three directions: toward his tubby, socially taciturn assistant manager who seems too immersed in numbers to have a passion for the game (even though he watches the games and Beane doesn’t); toward Beane himself, who may have lost a lot of that passion after being drafted as a promising star, only to reveal that he didn’t have the right stuff; and toward the audience, which might include a viewer like me who doesn’t share that passion at all and doesn’t follow baseball to the extent that I had no idea who Billy Beane was or what the Oakland A’s achieved in their 2002 season. 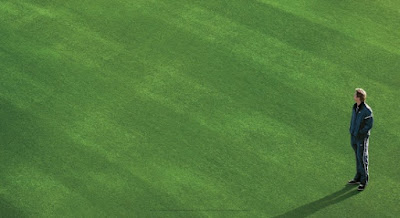 Indeed, it would be very hard not to be romantic about baseball, watching Bennett Miller’s meticulously made Moneyball, which includes memorable writing, solid performances, and striking cinematography that breaks out of the claustrophobia of the Oakland A’s cramped, austere offices and locker room to frame long shots of Beane in isolation or the infield lights of the ballpark fading to mist. From opening shots to the final poignant extreme close-up, Moneyball never hits a false note for me. Scene after carefully staged scene makes you feel emotion for a game played with a bat and a ball by players who don’t need to have the agility of basketball players or the strength of football players but who must have that elusive knack and built-in confidence that ensure they can make the ball go somewhere, anywhere, and get on base.

My ignorance of the true story, of course, shields me from any possible altering of the facts done for dramatic purposes; and my lack of knowledge of the real-life Billy Beane allows me to look at Brad Pitt’s Billy Beane as an engaging fictional character, a driven crusader in Great American Novel style, a defiant and driven Huck Finn navigating an unknown river full of stubborn obstacles in order to prove that outcast players who, at least, can get on base, can win games. In one scene, Beane and Brand strategically trade players considered the best, so that the manager (Philip Seymour Hoffman) will be forced to play an undervalued player with a promising record of hits.

Bennett’s direction and the excellent performances instill that sense of butterflies-in-the-stomach excitement in me, someone who does not follow baseball at all, to the extent that I had no idea the Oakland A’s achieved a twenty-game winning streak and made baseball history. Thus, the film’s climactic moment was a total surprise to me and I got an extra dose of suspense. But growing up in San Mateo, California, with a father and an older brother, staunch Giants fans, whose passion for the game equaled my zealous passion for movies, I was well aware of the Oakland A’s, that shabby team whose shaggy-haired players in their dumb-looking uniforms quickly came out of nowhere to give my father a chuckle and win his admiration with their bungling audacity. I believe my father, who followed the emergence of the team in Oakland in the 70s, called them clowns but said he was rather fond of them.

But growing up with a father and a brother who loved to talk baseball, who extolled the nobility of the game, I was open to this well-framed, lovingly made film about that passion for a game. A great deal of the film’s touching core is established by the acting. Although Pitt could benefit by varying what he does with his jaw and his lower lip, his all-American looks fit the atmosphere. In some profiles he looks like Robert Redford whose classic features suited his role in The Natural, another film that captures the tension evoked by a lone batter at the plate and the glory of a high flying ball arcing over the outfield. Juxtaposed with the handsome, athletic Beane is Jonah Hill’s Peter Brand, roly-poly and slow on the uptake, but always confident about what the numbers seem to indicate. Hill’s croaky, deadpan delivery is perfectly timed and often hilarious.

Pitt and Hill are supported by a number of understated performances, but the frosting on the cake comes from the delightful performance of Kerris Dorsey as Beane’s daughter, Casey, a young teen just entering puberty with an emerging worldly wisdom, an affectionate awareness of her father’s dreams, and a need for his presence in her world. Her performance is unself-conscious non-acting that is refreshingly naturalistic and very touching. Casey is Beane’s good angel, sensitively telling him to take more pleasure in what he does, suggesting that it’s not all about winning. Dorsey's perfect performance subtly suggests Casey’s own regrets and losses, similar to Beane’s regrets about his past, so it is appropriate that the film ends with her voice, singing a song for her father, reminding him to find satisfaction in what he has achieved and open himself up to the passion.
Posted by Richard Bellamy at 1:22 PM