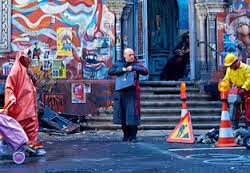 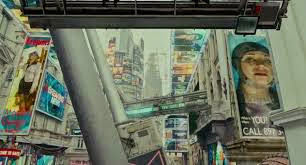 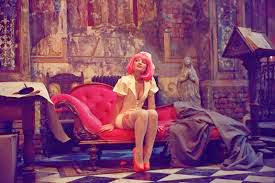 In The Zero Theorem Terry Gilliam borrows way too much from Ridley Scott’s Blade Runner (overcrowded megacity glutted with advertising; the meaning of existence; blonde in tight skirt; pigeons) and his own film Brazil (bureaucratic dystopia; totalitarian control; bizarre computers; unlikely relationship; escape into fantasy; tubing) to be an experience as refreshing and original as The Imaginarium of Doctor Parnassus. In addition, Gilliam allows his performers to slip into weirdness to the detriment of the story's essential seriousness. Here, Christoph Waltz plays an agoraphobic, misanthropic computer hacker assigned the job of proving a perplexing theorem that suggests that life has no meaning – while at the same time trying to determine the meaning of life. Despite a promising first scene, and a number of arresting images, Gilliam leaves us with a disappointing resolution, whereas a more spectacular denouement seems to be promised by the film’s opening image. Still, I can’t help but marvel at the amazing detail and outlandish, Pythonesque weirdness of Gilliam’s expansive imagination.
Posted by Richard Bellamy at 11:30 AM No comments: 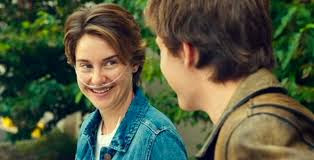 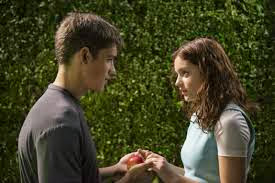 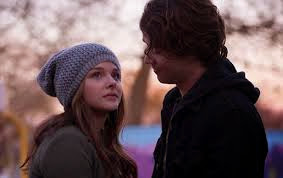 This summer, the big, loud action blockbusters came out roaring, booming, and punching, but they subsided quickly into the vast realm of the forgettable. Meanwhile, teen-oriented films based on popular young-adult novels offered viewers some lasting emotional impressions. The Fault in Our Stars, The Giver, and If I Stay all have their silly moments, but two of them offer fine performances, by Shailene Woodley and Chloë Grace Moretz, and all of them provide touching moments that are a refreshing break from the ubiquitous blockbuster action made up of extravagant explosions and endless, pounding fisticuffs between heroes and villains. In addition, this summer, Boyhood, a realistic, touching examination of a boy growing up into teenhood, drew young viewers to “art-house” theaters.

We are in the midst of a growing trend. The thriving young-adult fiction market churns out dystopian, post-apocalyptic, and romance novels that get teens reading and hankering for the inevitable film version of the more popular ones. Teen viewers might complain that the filmmakers left out or changed this or that scene, but they love visualizations of their favorite books, and the only pounding is the pounding of their hearts during the romantic scenes – which tend to have a more lasting impression than the noisiest action and the biggest explosions.
Posted by Richard Bellamy at 7:03 PM No comments:

When the Moment Seizes You: Boyhood 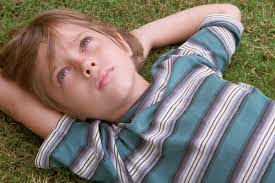 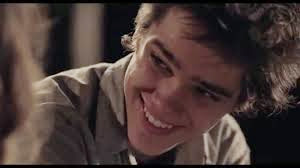 Boyhood, Richard Linklater’s epic portrait of a boy’s life from age 6 to age 18, was filmed over a twelve-year period with Ellar Coltrane playing Mason, Jr., as the boy, while Ethan Hawke and Praticia Arquette play his divorced parents and Loralei Linklater plays his sister. As these performers age over the 12 years of filming, they play out a simple drama about everyday life. Mason Jr. wonders about the world, makes friends, submits to temptations, develops a passion for photography, has a high school girl-friend, breaks up, and goes off to college, all the while questioning the meaning of life and looking for his place in the world. What’s it all for? Meanwhile, his mother struggles as a single mother trying to get an education to get a better job; she also gets into, and out of, two bad marriages with alcoholic, abusive individuals. The boy’s father, Mason, Sr., played by Ethan Hawke, is a wandering free spirit, also looking for his place in the world. Though Hawke has played a similar sort of character in the Before Sunrse trilogy, he develops his character substantially over the twelve years of filming, and at times Hawke unifies a film with very little, if any, pervading conflict.

At times a little stilted and aimless, the film very effectively presents life’s mundane moments and real dramas, both painful and touching. Some of the film’s moments are so naturalistically depicted that, for example, you can smell the fried food in the restaurant kitchen where Mason Jr. flirts with a co-worker or feel the Texas sun on your back when the boy and his father take a dip in the water on a camping trip. The long tracking shot down an alleyway when Mason Jr. talks to a gossipy school girl as he walks next to her on her bicycle is sharply realistic and suggests the countless moments like this that make up a childhood.

Although not as expansive or awe-inspiring as The Tree of Life, another vivid depiction of growing up in a Texas town, Boyhood is awesome in its scope as it takes you convincingly from the moment when a young boy lies on his back and wonders about the universe to the moment when he goes on a hike with new college friends and wonders about a possible future with someone he seems to connect with. The film stresses the importance of each moment in life, and within its 165-minute length, it covers many of those moments in a twelve-year span with an honest minimalism.

Posted by Richard Bellamy at 9:53 PM No comments: