The Imaginarium of Terry Gilliam 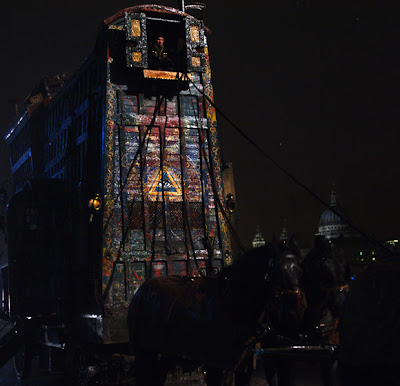 In Terry Gilliam’s The Imaginarium of Doctor Parnassus, an old-fashioned acting troupe travels around modern-day London in a lopsided horse-drawn gypsy wagon. They camp in condemned lots strewn with rubble. Their stage unfolds from their wagon and their show features a magic mirror that offers audience members a chance to enter their own imaginations. But their imaginations can be manipulated by Doctor Parnassus (Christopher Plummer) – who offers chances to make moral decisions, or by Mr. Nick (Tom Waits), the Devil himself – who sends his victims to hell. Or so it seems. The film is never quite clear about how things work in the fantastic worlds within the Imaginarium. But if what you see leaves you lost from time to time, you can always sit back and let it blow your mind. 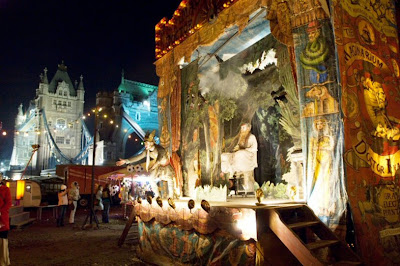 Christopher Plummer plays philosopher Doctor Parnassus as an immortal King Lear who made a bad choice. He made a bargain with Mr. Nick, the devil: eternal life for the soul of the first daughter he might sire. Doc. Parnassus never thought he’d fall in love – but one thing about life is that there’s always the unexpected. Soon it will be his much-loved daughter’s sixteenth birthday and time to pay up. But Mr. Nick is a gambling man, and the wager is laid that Doctor P. can keep his daughter, Valentina, (Lily Cole) if he can win five souls over to the powers of his imagination before Mr. Nick can lure five souls to his temptations. (Again, what it means for the Doctor to “win five souls” is never quite clear.) Parnassus has the help of a young magician (Andrew Garfield) in love with Valentina, and a dwarf (Verne Troyer). As for Tony (Heath Ledger, Johnny Depp, Jude Law, and Colin Farrell), the mysterious stranger they save from hanging, it is unclear whose side he is on. 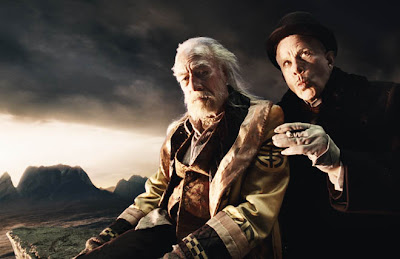 Terry Gilliam! You’ve got to hand it to the guy. The creator of Brazil certainly has a unique and vivid imagination. Film fantasy worlds are often like something else you’ve seen – but Terry Gilliam’s worlds are unlike anything you’ve seen: an oily black river turns into a cobra with the face of Mr. Nick; massive surrealistic buildings rear out of the waste land; cliffs lean at giddy heights; ladders sprout from a whimsical pastoral landscape; the ladders split and Tony (Jude Law) balances on gigantic stilts; a huge English bobby’s face and helmet spiral out of the ground; Valentina flees through a void of floating glass shards; Tony (Colin Farrell), his corruption exposed, evades gaping chasms; Tony (Johnny Depp) escorts an avaricious woman through a swamp of glitzy consumer goods. 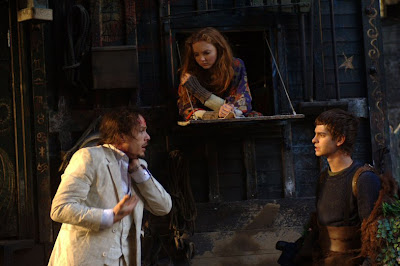 The late Heath Ledger’s first appearance in the film – hanging by his neck from London’s Millennium Bridge – is somewhat disquieting. In addition, Tony turns out to be a confused amnesiac who might be someone who can’t be trusted. Indeed, Tony casts lustful eyes on Valentina – and she’s not even sixteen! Then he wants to help the Doctor win Mr. Nick’s wager by jazzing up the show to attract larger audiences, but this also gives him the chance to lose some of his enemies in a bizarre world of cross-dressing London policemen. 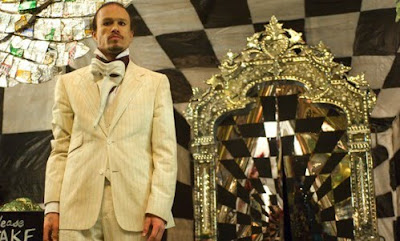 While shooting scenes in damp and dirty London locations, Ledger seems to have been suffering from a respiratory illness on top of suffering from insomnia, and this shows in his portrayal of the troubled Tony: disheveled clothes, long and dirty hair, the hyperactive style reminiscent of his performance as the Joker in The Dark Knight.

By using three different actors to complete Ledger’s performance, Gilliam suggests that Tony is a very conflicted individual. He had good intentions, but temptations led him astray. Depp, Law, and Farrell fill in for Ledger by playing alternate versions of Tony in three different fantasy worlds, and it is touching to see each of them doing his part with enthusiasm and talent, imitating their friend’s style and accent so that, wearing the same makeup, they look like Ledger. It took me a while to be certain that suddenly Tony was being played by Johnny Depp and not Heath Ledger. Then it was fun looking for the appearances of Jude Law and Colin Farrell. Farrell, especially, does a fine job of portraying Tony in the imaginary world that reveals him to be an exploitative fraud. As Tony, he is devious, desperate, and uncontrite. His is the last soul that will break the tie between Parnassus and Mr. Nick, and the competition is suspenseful.

Gilliam’s CGI worlds are mind-blowing, but Gilliam always shows his talent for constructed sets. Some of the fantastical landscapes start out in meticulously decorated sound stages – and the gypsy wagon is a clever, surrealistic construction with multiple hallways and floors that seem too numerous to fit inside the structure as seen on the outside.

In addition, Gilliam creates striking contrasts by employing locations in London’s abandoned lots so that ruined warehouse walls and collapsed girders form a bleak setting for the wandering theater of Doctor P. These locations are sometimes more interesting than some of the befuddling fantasy images. For Doctor Parnassus and his outcast purveyors of imagination and crucial choices, the real world is a dirty, grimy place full of garbage. These are the locations for the majority of Ledger’s scenes as the troubled stranger whose feigned death is an attempt to escape unavoidable demons within the hauntingly truthful, fever-dream worlds of the Imaginarium.

Like Doctor Parnassus, Terry Gilliam is compelled to manipulate bizarre worlds of imagination, and this fantastic show will definitely keep you watching wide-eyed. It might also cause you to scratch your head from time to time. But the show is definitely worthwhile as a showcase for unique visuals as well as for the heartfelt performances of Depp, Law, and Farrell: a tribute by actors for the actor friend they lost.

Posted by Richard Bellamy at 9:00 PM

Nice review! I'm a huge Gilliam fan and am really stoked to see this, esp. to see how Depp, Law and Farrell do filling for Ledger.

Thanks, J.D. You'll enjoy this. You can really lose yourself in Gilliam's whimsical worlds - both in the imagined worlds and the world of Dr. Parnassus's theater wandering through London. He was very clever to have this old-fashioned traveling show set in modern London.

I thought it was great how each of Ledger's replacements got to respect his performance even as the nature of the story allowed them to play to their various personae (Law getting to be the fresh-faced boy, Farrell the dark hottie and Depp the rake). But, as he always seems to do when he pops up in a movie, Tom Waits stole the show. If it wasn't for Christoph Waltz, I'd be calling for him to get the Supporting Actor Oscar.

Thanks, Jake. You're right, Tom Waits was great (as was Waltz). I did enjoy the cameos of the replacements - and as I said, Farrell was the best, I think. I guess it helped that he got the more substantial sequence.

I wasn't quite sure what to expect from Parnassus; while it's not as though anyone thinks his talents have lessened, the Gilliam name just doesn't seem to have the cache it once had.

I'm hoping Parnassus changes that...assuming enough people see it. I ended up pretty smitten with the film, and like Jake, especially with Waits' performance, a more or less remarkable feat given the looming shadow of Ledger over the film.

Fletch, thanks for the comment. Glad you enjoyed it. I was surprised. I thought it would be a flop. But the acting was engaging and there was a lot to think about - not just the inscrutable mysteries of the Imaginarium. It definitely fit into my top-20 favorite films of 09.