The Beauty of Death: The Book Thief 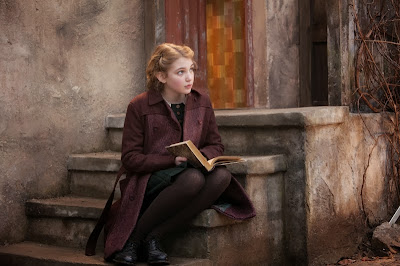 The Book Thief, directed by Brian Percival, is a beautiful movie about death. But this is not a failing. As narrated by Death (Roger Allam), the film adaptation of the classic young adult novel is a piercingly poignant treatment of growing up during wartime as seen through the eyes of a young Liesel, an illiterate girl who learns to read and learns the power of words over the injustices of Hitler’s Germany and the tragedies that ensue. At the same time, in contrast with the scenes of death, fear, and intolerance, this is a very visually pleasant film, thus providing dramatic visual irony.

As Liesel, Sophie Nélisse is charmingly beautiful in her touching performance of the little orphaned girl who lives in a small German town full of ordinary people who suffer because of a war brought on by the evils of Nazism. Geoffrey Rush and Emily Watson are also memorably touching as the parents who adopt her.

With its images of snow and the shops and houses of a quaint German town – with its central image of a blonde-haired girl with dazzlingly big eyes learning the wonders of reading – even with the juxtaposition of sinister yet colorful Nazi flags – the film takes on the look and feel of a fairy tale, much like the story told by Liesel in an underground shelter to take people’s minds off the bombs. And in this fairy story atmosphere, Liesel is an enchanting fairytale princess, brave and noble, in a story in which not everyone lives happily ever after.

Narrator Death takes pride in that the soldiers charging into battle or not running toward glory; they are running toward Death. And Death exacts his toll with ease, but he admits that he is “haunted by humans.” Indeed, he should rightly be haunted by the strength of young Liesel that shines through her fairy princess beauty. Sophie Nélisse's performance is beautiful. She portrays Liesel’s strength of soul in every scene. She makes the film a very touching experience, while the film's attention of detail, lighting, and color make this a film worth watching.