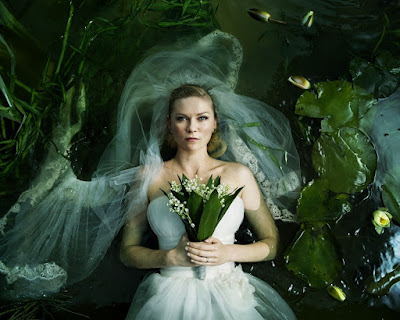 Lars von Trier’s Melancholia opens with a devastating image. Justine, played by Kirsten Dunst, stands facing the camera. Under heavy lids, her eyes open slowly, halfway. Her limp hair hangs in unwashed strands. Behind her, dead birds fall from the sky. Like Thomas Wolfe’s “God’s lonely man,” Justine peers into the abyss. In this case it is an abyss of depression. What follows this perfect metaphor for depression is a montage of images, some symbolic, some presaging what is yet to unfold, some rendered in such extreme slow-motion that movement is barely perceptible. To the music of Richard Wagner’s brooding prelude for Tristan and Isolde, we see ashes falling over Peter Bruegel’s painting “Hunters in the Snow.” Justine, in her white wedding gown, struggles to run, held back by heavy strands of black yarn. A horse collapses under a black, apocalyptic sky. A woman carrying a young boy moves imperceptibly across a golf course. Planets collide.

This examination of deep-seated depression in the shadow of impending, very metaphorical, cosmic catastrophe, is divided into two parts. “Part One: Justine” covers the disaster of Justine’s wedding reception as she succumbs by increments to the depression that has ruled her life. Her father (John Hurt) acts childishly and gives a toast that antagonizes his ex-wife (Charlotte Rampling). Justine’s mother responds with a bitter declaration about the absurdity of marriage. Michael (Alexander Skarsgard) makes an innocent proclamation of deep affection but becomes more and more alienated from his bride as Justine leaves the wedding party to lounge in a bath, drive a golf cart around the golf course, tell her boss how much she despises him, and do anything to avoid becoming intimate with her husband. Throughout all this, Justine’s sister, Claire (Charlotte Gainsbourg), tries futilely to stop Justine from falling apart, and Justine’s brother-in-law, John (Kiefer Sutherland), tries to act the dignified host while regarding Justine’s family and her behavior with haughty disgust. 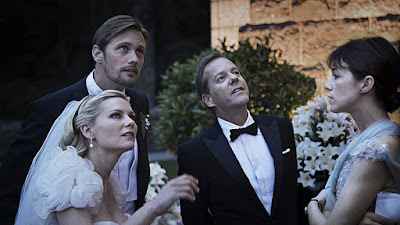 “Part Two: Claire” focuses on impending planetary disaster as the planet Melancholia heads toward Earth, supposedly, as scientists have predicted, to pass Earth by. Here, Justine is so depressed that she can’t even climb into a bath with her sister’s help. Even though Claire says to her sister, “Sometimes I hate you so much;” she also says to her husband, “She’s my sister,” and it is touching how tenderly Claire cares for Justine. Knowing that horseback riding is a release for Justine, she takes her sister riding, and we are treated to the stunning image of Claire and Justine riding black horses along a winding road under patches of fog. But since Claire cannot quell her sense of trepidation for her own life and the life of her son, Leo (Cameron Spurr), it is ultimately Justine who ends up taking care of her sister.

The best strengths of this memorable film derive from the deeply invested performances of each cast member, and the compelling nature of the film’s imagery.

Kirsten Dunst’s performance is a gripping one. Her face is sharp, her eyes cold with pain. Dunst dramatically shows Justine’s decline from a childlike innocence as she arrives in a stretch limo that, absurdly, can’t make the turn in a narrow winding road to a deep despondency registered as pain in a visage that grows harder and harder during the wedding celebrations. Later, however, as disaster looms, her eyes seem to see purpose. She has already peered into the abyss. Now she can comfort her nephew with the fantasy of building a magic “cave” of sticks. Now she tends to her unhinged sister.

Gainsbourg plays a loving mother and a devoted sister. She tenderly tries to help her sister to get into a bathtub. She pushes Justine to ride her horse, which provides some relief. She provides security by means of ritual, planning a wedding celebration with symbolic activities such as writing best wishes on the panels of hot air balloons released into the darkness. But ritual, and the shallow security of her wealth and privilege, cannot save her from the approaching apocalypse. When her son’s makeshift device consisting of a stick and a coil of wire reveals that the rogue planet has returned on a collision course with Earth, she becomes unhinged. Now it becomes Justine’s role to take control and provide compassionate care for her distraught sister.

The film belongs to Dunst and Gainsbourg, but the other cast members say much about their characters in brief appearances. With expressions and few words, Skarsgard very touchingly portrays Michael as a simple innocent who wants to grow apples. Slowly he becomes aware that Justine’s depression makes their marriage impossible, and the expression of his bewilderment is heart-wrenching. In one of his best performances, Kiefer Sutherland plays John as imperious and seemingly confident. He finds it hard to tolerate Justine’s bizarre behavior, complains about how much the reception cost him even though he’s rich enough to have his own eighteen-hole golf course, but he defers to his wife, Claire, who seems to sacrifice all for Justine. Rampling, as Justine’s iconoclastic mother, sketches a woman whose personal bitterness comes out as indifference toward her suffering daughter, and she makes clear some of the causes for Justine’s anguish.

In addition to the acting, von Trier’s talent for framing memorable imagery carries the film. Starting with a very striking prologue that lays out images that encapsulate the plot, the film continues to offer images that catch your attention, culminating with a dramatic, touching image symbolic of heart-breaking compassion.

In way of comparison, von Trier’s Antichrist and Melancholia share similarities that suggest they are variations on a recurrent theme. Besides sharing such imagery as a bridge that strikes fear in the Woman in the former and Justine in the latter, as well as the hailstorm and other bizarre natural phenomena, both films examine characters who are suffering from extreme psychological turmoil.

In Antichrist, the Woman (Charlotte Gainsbourg) suffers from extreme guilt and grief due to the accidental death of her son. In Melancholia, Justine suffers from immobilizing depression so intense she can’t get in a taxi or a bathtub while her sister suffers from a dread that completely unhinges her to the extent that it is Justine who summons the compassion to help Claire’s son deal with the impending disaster. But the films differ in what happens as a result of extreme inner anguish.

In the psychological horror film Antichrist, the Woman’s grief and guilt make her respond with ghastly acts of violence toward her husband and herself. Meanwhile, in the psychological disaster movie Melancholia, Justine’s turmoil seems inconsolable until the approaching apocalypse gives rise to emotional triumph, however brief it might be. Neither film is happy, but in Melancholia there is the feeling of some sort of positive deliverance. 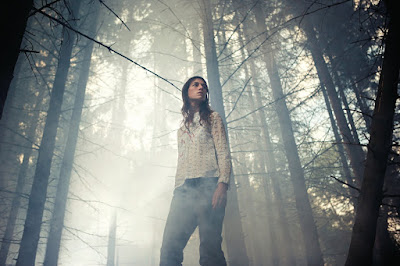 In both films, von Trier certainly goes to metaphorical extremes, but the subjects he explores are extremely intense ones. As difficult as it is to watch, the graphic violence and masochism of Antichrist seems entirely appropriate in relation to the intensity of anguish suffered by a mother who has lost her child due to an accident for which she blames herself. Her guilt is so great that she decides she is the Antichrist. If one considers the debilitating effects of severe, suicidal depression, von Trier’s metaphor of the planet and the impending disaster in Melancholia provides a brilliant illustration of that kind of anguish. I would rather not watch Antichrist again, but I’ve already watched Melancholia three times and I hope to see it again, for the excellence of its performances, primarily Kirsten Dunst’s, and the eloquence of the memorable images it frames.
Posted by Richard Bellamy at 9:00 AM