Game Mode: Prince of Persia: The Sands of Time 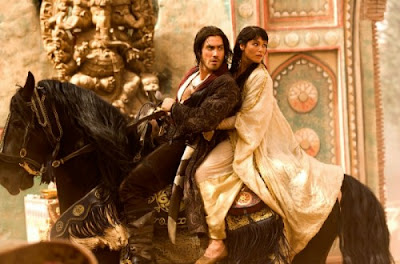 Impossibly acrobatic Prince Dastan (Jake Gyllenhaal), the former street urchin who is adopted by the king. Luscious-lipped Tamina (Gemma Arterton), guardian of the magic time-warping dagger. The magic time-warping dagger – the worst prop since the crystal skull in Indiana Jones and the Kingdom of the Crystal Skull (2008) – with its cheesy glass handle, magic sand, and jeweled button you press to reverse time. The evil Jafar, I mean the so-bald-you-know-he’s-bad Nazim (Ben Kingsley), who wants to turn back time so he can be king. These are some of the characters involved in a conflict over said magic dagger in Mike Newell’s Prince of Persia: The Sands of Time.

Now, I’m good for any mindless adventure that transports me to another place and time, but this adaptation of the popular video game never goes beyond video game mode. It’s an endless blur of superhero leaps and bounds and a constant flash of swordplay that never constitute any distinctively memorable action scene. One scene with potential involves the duel between the knife-throwing expert, Seso (Steve Toussaint) and a spike-shooting Hassansin, but even that scene, with all its flying projectiles, feels like merely a higher level in a game.

The lackluster acting and minimal characterization also keep Prince of Persia in game mode. Gyllenhaal as Dastan reveals a glimmer of Errol Flynn dash, but for the most part he just smirks wryly at the next impossible predicament and makes big goo-goo eyes at Tasmina, whose tanned skin, huge eyes, and voluptuous upper lip are the most interesting details in the movie. Frustratingly, the movie never explains why Dastan can leap so high! Meanwhile, Toby Kebbell and Richard Coyle blandly play Dastan’s bland brothers, and Ronald Pickup is whiny as King Sharaman. Alfred Molina injects character and elicits some laughs as the garrulous Sheik Amar, a conniving, opportunistic entrepreneur who runs an ostrich-racing racket. But at the point at which Dastan remarks that Amar talks too much, I was feeling the same way.

CGI renders vast Persian cities, but there’s neither majesty nor whimsy to them, and the Moroccan locations employed are mostly bleak terrain with lots of sand – it’s a very sandy movie. In a few scenes, Moroccan ksars provide real atmosphere, but the mise-en-scéne comes off as half-hearted and unimaginative, as routinely superficial as some Disneyland ride settings. CGI also depicts what the credits bill as “sand time” – kind of cool, but the scene involving the effectively chilling sand vipers happens too fast to enjoy. In the end, there seems to be no rhyme or reason to how the sandy thing works. I thought it was supposed to cause an apocalypse. How is that supposed to make Nazim king?

Prince of Persia borrows heavily from Disney’s own Alladin, as well as from just about every Errol Flynn adventure, but it never achieves the joy, exuberance, and memorable action of one of those classics. I just felt like the time I made the rare purchase of a PC game: The Fellowship of the Ring, and I could never get out of the first level. I wandered around Hobbiton for hours and hours. (I much later read that the game was defective.) And that’s the defect here. We get the repetitious action, the CGI, the leaping heroes, but we never get liberated to a cinematic level of escapist adventure that takes you away to another place and time where delightfully memorable things can happen.

Posted by Richard Bellamy at 1:27 PM

Reading this review and how awful this film sounds makes me long for the cinematic craftsmenship of Stephen Sommer's first MUMMY film back in '99!

J.D. That's a good example of what I'm talking about. The Mummy transported me whereas this so-called movie left me in my seat.

Agreed. Plus, Bredan Fraser looked much more comfortable as an action hero. He found the right balance between two-fisted action and humor. And Rachel Weisz was pretty hot as the "nerdy" librarian (yeah, right!).

Weisz added a lot - and Fraser seemed to be enjoying his part. Gyllenhaal seemed stiff and uncomfortable and he only seemed to register a couple of facial expressions.

I went in with somewhat low expectations and was pleasantly surprised. Not awed, but surprised. I chuckled a few times, I was creeped out for a minute by the head assassin and the snake, and I couldn't help gazing at the aptly named Gemma. So there!

Yes, there you go, Yuba Guy. Thanks for the comment. I agree on the chuckle, the snake, and Gemma - but there just wasn't enough there to take me away in a satisfying way.

You had me at "Impossibly acrobatic Prince Dastan (Jake Gyllenhaal)"

I might pay to see JG make goo goo eyes at me.

Well, thanks for the comment, Allison, and it is a shallow movie, and there are ample shots of Jake's goo goo eyes. As for your claim that you're shallow, that stunning photo on your blog's header is not the sign of a shallow person.

I'm not gonna say this is really any better or worse than The Mummy - I think it's pretty sad that those movies are held up as an example of a "good" action flick. Passable, perhaps, but nothing worth emulating.

I put PoP in the same category. So long as it's seen as just a decent cash grab/way to kill 120 minutes, that's fine by me. It's neither terrible nor any good - a melange of so, so, so, many other movies, with really nothing memorable outside of Alfred Molina.

"I thought it was supposed to cause an apocalypse. How is that supposed to make Nazim king?"

My understanding is that Nazim didn't know about the real effects.

Thanks, Fletch. Yeah, The Mummy is not amazingly better than Prince but I found it more engaging. The is a lot of action - a lot of running and jumping and swordfighting - but nothing very clever or distinctive.