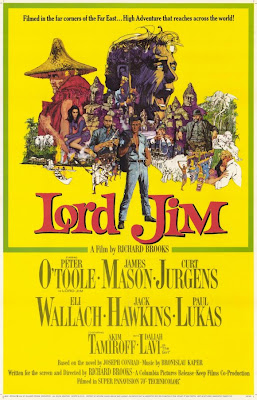 We all have our favorite forgotten screen gems, films unanointed by the critics’ stamp of approval. For me, one of those movies is Richard Brooks’s Lord Jim (1965), based on one of my favorite novels: Joseph Conrad’s thrilling tale of cowardice and honor, sin and redemption.

Only three years after Lawrence of Arabia, Peter O’Toole stars as the idealistic young British seaman who performs an act of cowardice that sets him on an exacting quest for redemption. Unaffected as yet by drinking and stomach cancer, still the lithe, handsome man with those sparkling blue eyes, O’Toole is tremendous in the role of Jim, the tortured outcast who strives for honor and admiration.

In a role that is a favorite of mine, James Mason plays Gentleman Brown, the soulless pirate dressed in bowler hat and suit coat; he carries a Bible and delivers merciless commands with rich, precise intonation and gentlemanly diction. The talented cast includes Paul Lukas as Mr. Stein, Jim’s father figure; Daliah Lavi as the Girl, Jim’s lover in the remote village of Patusan; Akim Tamiroff as Schomberg, a scurvy opportunist; Curt Jurgens somewhat miscast as the cowardly trader Cornelius; and Jack Hawkins as Captain Marlow, Conrad’s faithful narrator. Notably, Eli Wallach plays the General, the nihilistic warlord who enslaves the villagers of Patusan. Wallach taps into his signature persona: the outlaw leader Calveras in The Magnificent Seven), but he pumps up the evil here. The General is a philosophical but heartless outlaw who would never give Jim his guns and allow him to ride on.

All these fine performers carry a tale that is divided into three visually different chapters: Jim’s training at sea and the mighty storm that tests him; Jim’s journey up the river into the jungle and the battle against the warlord; Jim’s glory days that are soon interrupted when Gentlemen Brown and his cutthroats steam up the dark, foggy river to steal anything they can get their hands on. Notably, the attack for the General’s fort dominates the middle third of the film with suspenseful preparations of villagers and lance-propelled bombs, under the direction of Jim; the initial bombardment and assault, which leads to a setback that brings Jim dangerously close to his old fears; and the final, gripping shootout and destruction of the fort. Though perhaps too long for the overall structure of the film, this wonderfully visual sequence always ties in the themes and conflicts that pervade the story.

As in Lawrence of Arabia, cinematographer Freddie Young, under the direction of Richard Brooks, frames a tale of violence and conflict and memorably establishes the atmosphere of foreign locations: in this case, the seas, islands, and jungles of the Malay archipelago. Once again, he visualizes the story of an Englishman who is a tormented outcast in a very alien place. The vivid jungle images evoke an atmosphere of dank remoteness, a place for outcasts. Young’s camera dramatically captures this adventure’s thrills: the storm that threatens to sink the Patna, a leaky scow full of Muslim pilgrims that provides the stage for Jim’s act of cowardice; the exciting escape from the General’s jungle fortress; the thrilling, violent attack of the General’s fort that turns Jim into a venerated hero; and the final dark and violent encounters with Gentleman Brown, the fateful threat that brings back the fear he faced on board the Patna and the choice he made. But more than just an adventure, Lord Jim is a thoughtful examination of fate, fear, and the cowardice and heroism that all humans are capable of displaying. The film’s most obvious strengths are visual – the cinematography and the action – but the film also takes time to delve thoughtfully into the story’s main themes – perhaps sometimes a little too extensively to the detriment of the film’s pace.

We acknowledge the greatness of films because of structure, artistry, ideas, and performances, but sometimes more than the appreciation of these qualities, it is a particular scene – or a line of dialogue we borrow for use in an everyday context – that beckons us to repeat viewings and makes that film one of our favorites.

In Lord Jim the specific scene that always compels me to the viewing is the confrontation between Jim and Gentleman Brown on a ferry in the middle of a foggy river, a featureless limbo that symbolically separates Jim from his present – where he is called Lord Jim, has the love of a beautiful woman, and is revered by the villagers – and his shameful past – when he was torn between cowardice and bravery – a dilemma he fears he must face again. For me, there is a thrill to this dramatic confrontation – two dynamic characters played out by two dynamic actors – that is similar to the thrill of the Neil McCauley (De Niro)/Vincent Hanna (Al Pacino) scene in Heat.

The specific quandary Jim faces now is whether or not to let Gentleman Brown and his gang leave peacefully in order to avoid bloodshed. We see these fears in O’Toole’s distracted blue eyes as Mason’s rich intonations seem to emanate from Jim’s brooding conscience or from the insidious heart of the devil. When Jim disarms Brown, he sees the gun as a warning and premonition of violence. When he tosses it in the river, Brown gives a look of shock and umbrage, superbly expressed by James Mason. His look reveals that now he has come face to face with a sanctimonious but formidable force for good; perhaps he sees his end in the fall of the pistol. What’s brilliant about this meeting is that Brown draws the kinship between the two of them. They are both outcasts. They are both hiding from something. “No white man hides himself in a wilderness like this without a reason.”

Back with his thugs, Brown comments that Jim carries “the self-righteous stench of a converted sinner.” In response, the greasy Schomberg takes off his hat, wipes the sweat off his bald head, and gasps, “What's he done?” For Schomberg, Brown’s observation holds a whole world of sordid meaning. It’s a line I often utter when my wife says that our dear son has yet another “Current Concern” comment from a teacher at school. “What's he done?”

Of course, Jim’s decision to let Brown go is thematically fitting and fatefully tragic, and his final act of honor and bravery is eminently Conradian, and perhaps the film’s themes seem a bit too remote to modern audience members who might not distinguish such fine points of honor. But I love Lord Jim as a memorable cinematic rendering of a favorite novel, a tale of high adventure and enigmatic ideals.