Old Man and the Sea: All Is Lost 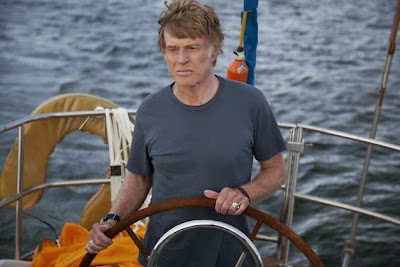 Robert Redford is the right man for the solo role in J. C. Chandor's All Is Lost.

Robert Redford is old. His face is rugged - cragged and weathered. He looks like an elderly sailor seeking solitude and separation from past pain.

He's just right for this essentially silent film about a solitary sailor battling the sea. Other than a brief voiceover, Redford only utters one word throughout the entire story, but he doesn't have to speak to move the story along. You know his mind is always calculating patiently, considering the next task he must perform in order to survive. As in films like The Naked Prey and Castaway, we are attentive to the things that he does in order to survive.

Meanwhile, Redford establishes tension and focus throughout, supported by thrilling action during a storm and beautiful cinematography of the sea. Underwater shots of creatures going about their business oblivious to the man's predicament might remind the viewer of Terrence Malick.

If Redford wins an end-of-career Oscar for this film, it won't just be a parting gift. It will be a well-deserved reward for a memorable performance in an exquisite film. 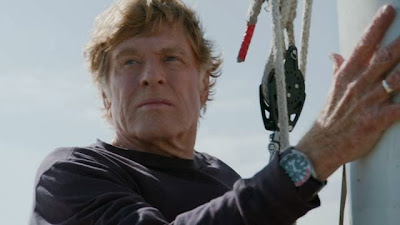 Posted by Richard Bellamy at 4:30 PM