Adventureland: A Dose of Reality 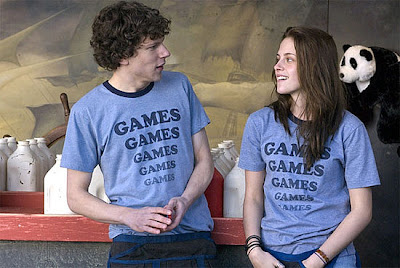 After I graduated from college, I blew my money on a trip up to British Columbia to visit friends “in the bush.” Back in Berkeley, with unemployment in California at a record high, I ended up washing dishes by hand and cooking burgers at a diner with the ominous-sounding name of the Terminal Inn. Reality bites.

Sometimes so real it hurts, Greg Mottola’s Adventureland is the ironically titled film about that post-graduate time in your life when you learn about the realities of employment and relationships and yourself. James Brennan (Jesse Eisenberg), a graduate whose trip to Europe is derailed by family financial difficulties, ends up taking the summer job from hell as a games attendant at Adventureland, a shabby amusement park outside of Pittsburgh, run by a guy named Bobby (Bill Hader) who has no qualms about cheating the games players. The job sucks. James has to deal with asshole customers, vomiting kids, and fellow employees such as his former high school buddy Tommy Frigo (Matt Bush), who persists in whacking him in the nuts as a joke. Frigo is indeed an asshole. We can probably think of friends we’ve had like that.

But the saving grace for James is that Em Lewin (Kristen Stewart) also works there. She’s been mourning the loss of her mother and has been having an affair with a married man, but James quickly falls in love with her and hopes that she can be the one to help him lose his virginity. Stewart plays Em with the downcast eyes and hesitant articulation that have become her signature style, but her investment in her character evokes Em’s tender vulnerability and her bruised psyche. Along with Eisenberg, she helps build the film’s naturalistic realism.

Adventureland is an enjoyable movie. At the same time, it’s a peculiarly disquieting one. We see the reckless things we do in our 20s: dating, going to parties, smoking dope, getting drunk, smashing Dad’s car into a tree, juxtaposed with some more hurtful behavior involving betrayal and intolerance, and all of this is presented in comparison with images of adulthood that are possible destinies for some of these characters. Em’s stepmother, who moved in on Em’s father while Em’s mother was dying of cancer, is a pretentious bitch, while the father is a passive pushover. James’s father is a private drinker whose bottle, stashed in the car, becomes incriminating evidence pinned on James while his father sits by too afraid to confess.

But James and his friends are responsible for their futures and have to make the decision to move ahead or remain behind. In a touching scene, my favorite, James and his friend Joel (Martin Starr) lounge on a sloping lawn while Frigo, pretending he’s shooting down Vietcong in a war movie, arcs Roman candles into the pale sky above them. It is a spare, memorable image that highlights this pivotal moment in James’s life. He plans to take the risk and seek a heavier dose of reality in the big city. Given what we’ve seen so far, we’re nervous for him.

Posted by Richard Bellamy at 9:06 PM

I finally got to this one, and I enjoyed it. Hope to review it at some point, but ...

"Sometimes so real it hurts." That's a great way to put it. And the pain comes both ways, in painful memories of the suffering of youth and in bittersweet memories of the beauty of youth.

Yeah, funny thing, I'm not rushing out to see this again, but I came away with the sense that it was a good movie with sincere performances.