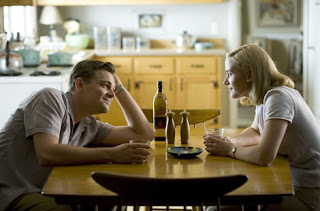 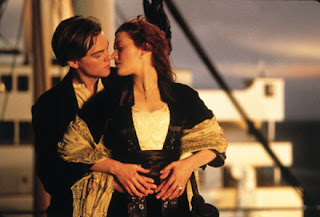 Revolutionary Road is not so much about how a young couple – Frank and April Wheeler – meet, fall in love, have children, move to the suburbs, and get sucked into the stranglehold of meaningless sameness; how they hatch a plan to live and work in Paris so that Frank can discover his true passion. The film is about April Wheeler. She’s the one who wants a different life.

When April first meets Frank and listens to him talk with passion about how alive people are in Paris, she is attracted to that idea more than to him. She’s the one who truly wants to discover her passion in life. Frank (Leonardo DiCaprio) is happy to follow the path of least resistance. He gets caught up in the plan when it makes him feel like a hotshot holding the power of his departure over his boss and colleagues, but when he is offered a chance to be a hotshot closer to home – closer to the traditional lifestyle his father led – he’s not so excited about leaving. For all his reckless behavior – he engages in a dalliance with a secretary – he is the pragmatic one, the one who wants to maintain a conservative stability.

It’s April – as played by Kate Winslet – who serves as the pith of the film – and it is her performance that is solidly sincere throughout. Indeed, the film starts with conflict that is all about April – whose name is ironic because her soul is suffering a harsh winter. She is an aspiring actress in a play that flops – and her sadness over this failure leads to the first big blowout between her and Frank. She jumps out of the car. She wants to be left alone. She wants Frank to shut up. She’s the one who is suffocating.

The film’s chief strength lies in the complexities of the characters of Frank and April evoked by the gripping performances of DiCaprio and Winslet. But DiCaprio takes time to work his way into his character after a stilted beginning in which he seems to be playing up the stereotype of the 50s hubbie – though this might be the director’s fault more than DiCaprio’s. Winslet’s presence and her establishment of her character are more sincere from the beginning. Thus, from the middle of the picture to the very end, the actor and actress famous for portraying the most famous star-crossed lovers in recent film history do a tremendous job of portraying the most divided couple in recent film history. The film contains what I think is an allusion to Titanic - when April explains to her children that they will be moving to Paris and that they will have to go on a big ship across the ocean. Winslet is subtle enough so that it’s not silly, but I’m glad it’s there because it is a reminder of the wonderful rise of the most talented actress in the industry.

However, the two leading performances are not solidly assisted by the supporting cast. Kathy Bates is awkward as Helen Givings, the prying real estate agent who seems to involve herself in the lives of the people who buy her houses. She comes off as stereotype as does neighbor-hubbie Shep (David Harbour) whose name and role fit right into stock suburban soap opera. Meanwhile, her schizophrenic son, played by Michael Shannon, seems less of a character and more of a contrivance implanted to haunt Frank and April for copping out on their dream.

But Helen Givings, the real estate agent, functions as a vehicle to set Frank and April down in the house on Revolutionary Road that becomes an ambiguous symbol. Supposedly, the house, “nestled on its little slope,” holds a unique quality that represents the uniqueness of the Wheelers – but April is the different one; she’s the one who looks up and down the street, notices this unique little house is not much different from the others, and realizes that she wants something different. The important function of the house on Revolutionary Road comes back to us in the very last scene when Helen, the real estate agent, says she’s happy that the house has finally found suitable owners (that is, sweet and conservative); she seems coldly uncaring that Frank and April – who at least attempted to pursue passion – are gone. They ruined the house’s image of stability and so it’s good riddance to them.

Another strength is the film’s vivid visual contrasts. The dazzling lights of New York City promise excitement and passion in the film’s opening shots; but April’s failed stage performance is followed by a shot of Frank and April walking down a long drab school corridor. After April runs into the woods across from the house, her inner turmoil stands out painfully in contrast with the soft greens of the trees. A montage of shots showing the rooms in the house – quiet stills devoid of life – suggest a sterile stability (you can almost smell the clean carpets) that is marred shockingly by a splotch of dark blood.

Overall, though the film as a whole does not achieve greatness, the performances of DiCaprio and Winslet do.

Posted by Richard Bellamy at 4:27 PM

Nice review. After battling it out in a lengthy debate on "Revolutionary Road" over at Tractor Facts yesterday, I'm talked out about this film for the moment.

I guess the only point of contention I'd have is in relation to DiCaprio as a 50s stereotype. I think all the characters in this film, except for April, are stereotypes, and I think that's the point. In fact, this is a stereotype, too, but I think the film is indicating that the 1950s marked the time when people most tried to move themselves into a stereotypical, cookie-cutter lifestyle.

So I don't disagree with the idea that Frank Wheeler is a stereotype, but he is the one pretending to be the stereotype. DiCaprio is playing a man playing a character, like Downey in "Tropic Thunder," actually.

Yes, I saw the debate on Tractor and I thought I'd put my two cents in.

Your comment about Frank "pretending to be a stereotype" is a good one. It says a lot about his inner conflicts - especially when he is offered the chance to be the corporate hotshot.

Leonardo and Kate suits well with each other in the screen.

As I read your review I like the story.

Thanks for the comment, nyc. They're a great film pair - and these as much magic here, though in a more serious vein, as in Titanic.