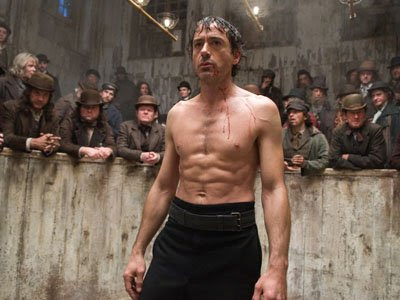 Downey Jr. is superb as Holmes. Totally invested, he molds Holmes’s eccentric characteristics into the consummate mad genius. All the characteristics are here – his powers of deduction, his mastery of disguise, his sardonic wit. What Downey Jr. does is effortless, and his glib facility for speech is phenomenal. He doesn’t perform Holmes; he becomes Holmes, re-inventing him as a seedy, cynical agoraphobic adept at fisticuffs, not entirely the Holmes of Sir Arthur Conan Doyle’s stories, but still the most engaging aspect of this film.

Unfortunately, in this film Sherlock Holmes doesn’t get to be Sherlock Holmes in the traditional sense of deducing the meaning of important clues throughout the story. He deduces Watson’s fiancé’s past, and facts about other characters, but we don’t get to hear his conclusions about all the important evidence – the potions and petals and powders and chunks of marble stuck together with a paste made of honey – until the end of the movie, after the villain’s death – and then it doesn’t matter. There’s no enjoyment derived from trying to draw our own conclusions about evidence and then hearing Holmes’s superior pronouncements. Holmes spends much more time engaged in fisticuffs than in doing what Sherlock Holmes does best.

Way too much time spent on fisticuffs. I like the fact that Holmes can lay his opponents low, and I like how he plots out his punches ahead of time like chess moves, but the fights are too loud, too sped-up motion, and too long. The confrontation in the dry dock with the giant Lurch, who picks up the huge sledgehammer and faces Holmes who holds a much smaller hammer, is clever and fun to watch, but it comes halfway through a much longer fight and chase.

London is dark, sooty, muddy, full of dirty street people, and the accent is on a steampunk atmosphere of Thames riverboats, clanking gears, massive chains, iron hulls, the emerging steel structure of the Tower Bridge, and fantastic electrical and radio-signaled contraptions in a setting that is still old-fashioned Victorian England.

Jude Law’s Doctor Watson is clever, suspicious of and perturbed with his best friend, Holmes, and he can’t give up a life of adventure and investigation. Jude Law is the best Watson yet, and we see his irritation and love for his friend all in a single affectionate but exasperated glance.

Pale as a ghost; horrendously bad eye makeup. It’s never clear what she’s up to – oh, yeah, working for Professor Moriarty, Holmes’s nemesis, chap with the chalky lapel. To do what? Steal some device whose function is a mystery? Oh, she’s sneaky and self-sufficient, but with Holmes and Watson so richly portrayed, who needs the American?

What’s the label for the use of sped-up jump cuts (usually for flashbacks) interspersed with slow-mo (to focus gratuitously on a punch) that is often typical of violent Brit crime dramas directed by Guy Ritchie or films like Crank? Whatever the label, it was interesting seeing this visual approach to a Sherlock Holmes tale set in Victorian England. But, by Jove, a little of it goes a long way and often goes too fast to register. Got real tired of it here.

Two favorite moments: 1) In the ring, Holmes seems to be losing the match with a burly Irishman. Then he plots out devastating hits on his opponents and lays him flat. The crowd is silent as Holmes staggers out of the grimy ring. 2) Too late, Watson realizes he’s triggered a booby trap. He warns Holmes just as explosion after explosion bursts out slow-mo with muffled sound effects while Holmes shields himself with a door and runs the gauntlet of detonations.

Not knowing anything about the so-called diabolical plot until the end of the movie robs the film of dread and suspense. And then Lord Blackwood (Mark Strong) doesn’t put up much of a fight. It all seems so sinister in the beginning, but then the bloke hangs quite nicely. As for the plot to take over the United States, weakened by the Civil War: Yeah, maybe weakened because Lincoln is dead, but Ulysses S. Grant has formed one of the most powerful armies in the world. Anyway, whatever – ho, hum.

I loved the look of the film – dark and mechanical steampunk London – and it would almost be worth seeing it again to savor every word uttered by the masterful Downey Jr., but the film’s fine performances and visual trappings deserved a better plot.

Posted by Richard Bellamy at 8:00 PM

I like your thoughts on the look of the film, but it still bugs me that Guy Ritchie and company takes the one character known for his powers of deduction and reduces him by having him perform enough action for the bored, sated teenage audience. Isn't Rachel McAdams basically wasted? I prefer to think of the original Holmes leisurely meditating on things with his pipe. He doesn't need to move at all.

FilmDr, I'm with you on this one. Some of those fist fights were SO long! Actually, I have to credit my son with the observation that Holmes doesn't get to be Holmes enough, "meditating on things," as you say, and drawing some conclusions when they matter. I was disappointed.

I agree with almost all of your thoughts here. Except I'm closer to FilmDr on McAdams. I liked her here -- in fact, I think the inevitable sequel will miss her if she isn't brought back. But she's "basically wasted."

Good call on Downey Jr. He does become Holmes, or maybe Holmes becomes him. That might be closer to the truth. Regardless, it works. Having no hope for the film based on the previews, I was pleased there was as much deductive reasoning as there was. (I thought it was going to be all fights.) But, yes, it's a major misstep to load all of the revelations into a final 5-minute speech, especially when we already know who the bad guys are. I suppose the film was trying to keep us clinging to the possibility that perhaps this really could be magic. But who was going to believe that? And, yes, Blackwood goes from being a terrific villain to dying all too easily.

* The fisticuffs must stop. Really, will this trend never end? Must all our heroes be action heroes now? The irony is that the fights are so bloody boring. Get rid of them!

* The theater where I saw the movie had the speakers turned up too loud and so much of the dialogue was hard to follow over the first half. The quick patter just sounded noisy. I missed a lot of words in Holmes' analysis of Watson's bride, for example. Alas.

* My favorite moment of the film is the one at the end when Holmes wipes a tear from the cheek of McAdams' character before he walks away. A terrific little moment.

* I would have liked to see a more traditional rendering of Holmes, but I'd love to see Downey Jr, Law and McAdams reunited for a sequel directed by someone else. There's potential there ...

Jason - Thanks for your thoughts. We agree on a lot. Yes, the fisticuffs must go. Watching the preview for Book of Eli with Denzel Washington standing surrounded by thugs he will subsequently drub in the style of countless countless action and martial arts films is just the wrong thing to show me in a preview. How unoriginal.

I'm not a fan of Rachel McAdams. She's cute. I liked her in Wedding Crashers, but since then she hasn't really shown me much talent. I guess if she could charm me in some way, I will change my opinion, but until then ...

Too bad about the sound for your viewing. Our audio was good - but even sometimes I missed some of Downey's words because he was mumbling a little too fast at the end of most of his speeches.

So - there was potential here: the look of the film; the performances - but with a better plot, and without the punching, this could have been a much better film.

I think you distilled my thoughts really well in your last sentence of the review. Parts of this loved but I knew it could have been better. The only thing about Downey that bugged me was that I felt like he was often mumbling, or maybe the sound mix was just bad. Either way I felt like I missed some of his choice lines.

Loved the look of it, though, and that first moment of silence you mention.

You're right. It could have been better. And I agree that Downey mumbled - but he said so many words that it didn't seem to matter sometimes! I don't think it was the sound system. I find that Downey, in most of his movies, uses the same sort of rapid-fire delivery of his lines - mumbling the last words in a speech. Sometimes I find his style a little irritating - but here it really fits Holmes.

"I find that Downey, in most of his movies, uses the same sort of rapid-fire delivery of his line"

That's right on, and I often get annoyed with it, too. Funny, I never really identified what it was that bothered me until just now. I think he just speaks too fast! But it does work here better than some of his other roles.

Yes. It clicked with me when I realized that as Holmes he sometimes sounds like the very glib Tony Stark in Iron Man.

Gentlemen, I really must take issue with some of your comments here. The action, particularly the barechested fisticuffs, are not solely for a "bored, sated teenage audience." Those scenes are an obvious pandering to the bored, sated housewife audience. And I, for one, wholeheartedly approve.

After the family and I watched this film, we embarked upon the enjoyable task of reading the entire SH canon. While this film may not have aligned with ACD's particular vision of his detective, I thought it was quite splendid.

Actually, thinking it over, I suppose I agree with you that they could have cut some of the non-shirtless action scenes in favor of more meditative moments, with or without pipe. And without shirt.

One of my favorite moments is when Holmes makes the quip about chambermaids once being such a liberal breed to Constable Clark, and the constable's response. Hilarious awkwardness!