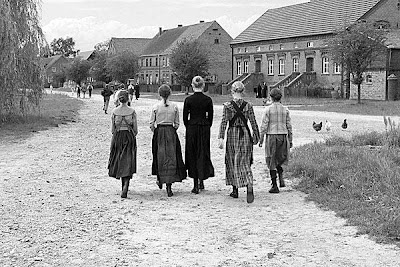 Michael Haneke’s sometimes riveting, sometimes ponderously slow film The White Ribbon explores themes of sin, guilt, punishment, and denial in a small German town on the eve of World War I. And you don’t have to be half German, like I am, to know that means heavy stuff.

Shot in black-and-white that gives it the look of something released in the 1930s or 40s, the film presents striking images of small-town country settings: fields of wheat and fields of snow. Notably, almost as in a documentary, we see the faces of German farmers, professionals, ministers, and royalty before the mutations caused by war, economic depression, and political upheaval: all subsequent history from 1914 to 1945.

The little northern German town of Eichwald has been plagued by inexplicable acts of cruelty. A doctor is severely injured when his horse is tripped by a thin wire strung between two trees. A boy is found hanging upside down, stripped and beaten. The acts cause fear and suspicion, and a disturbing pall hangs over the town. Similarly, a disturbing tone permeates the film. Are these acts simply acts of cruelty or are they meant as punishments?

The narrator, the town’s schoolteacher (Christian Friedl), seems to suspect Klara, played chillingly by Maria-Victoria Dragus. She is the grim-faced daughter of a minister whose strict paternalism includes punishment of his children by means of caning and the wearing of a white ribbon that symbolizes the innocence and purity for which they must strive. But anyone who has seen Haneke’s Funny Games (2007) knows that Haneke uses white as a misleading, ironic color that can also symbolize the blankness of the human soul.

As Klara (the girl clad in black in the image above) seems to be the center of a group of dour girls and boys, one might expect the town to be gripped by melodramatic malevolence as in Village of the Damned. But this is not an action thriller. This is a thriller of ideas that I still haven’t quite sorted out, though a disturbed feeling has stayed with me since seeing the film.

Perhaps the answer lies with Klara. She has learned enough punishment from her father to know how to punish others. Perhaps she and the other children are, in turn, punishing the adults for their unpunished transgressions. "And forgive us our trespasses, as we forgive those who trespass against us," her father prays. But perhaps there are trespasses that cannot be forgiven.

Or perhaps the blank soul lies elsewhere. Even when concrete suspicions arise, no one seems willing to reveal the wrongdoers. The trespasses must reside in the town like an unwanted visitor whose presence changes the townspeople's way of life forever as will subsequent history. In addition, history will ensure that any wrongdoing will be buried under the more horrendous transgressions of World War I and World War II.

I like how Haneke surrounds sources of light – lamps, a fire – by sheets of deep darkness as he did so dramatically in Time of the Wolf (2003). I also like how lengthy shots frame doors behind which something is happening – a demonstration of punishment or grief – but we don't get to see what’s happening. Sometimes, frustratingly, a scene seems to promise resolution until it is closed off by doors.

MAY CONTAIN A SPOILER:

Haneke establishes a pervasive dread and presents a number of disturbing images that have a visceral, thought-provoking effect, but he never grants us a resolution other than implying that the worst sin is the denial of sins committed by others. Thus, the ending is a frustrating one and the movie proceeds at a flat pace that never reaches a dramatic climax. I’d like to see this film again. Knowing that Haneke isn’t going to answer all my questions, I might find clearer answers of my own. I’d love comments from anyone willing to share their insights into this film, one that is full of relentless dread and stimulating questions, but one that doesn't always let you in far enough to keep you compelled as you view it, though it keeps you thinking after you view it.

I just saw this recently as well and thought it was great. Haneke just gets better and better as he matures. This film is very like Caché (his last "real" film if we ignore the Funny Games remake) in that its central mystery leads, not towards a solution, but towards an even greater mystery, an existential and internal mystery about the human soul, about guilt and sin and the consequences of vile acts being passed down through generations.

Thanks for the comment, Ed. You seem to appreciate Haneke's films and know something about them. I've seen this one and the two mentioned in my review. I really liked Time of the Wolf. Thanks for this insight: its central mystery leads, not towards a solution, but towards an even greater mystery, an existential and internal mystery about the human soul. That's how I was interpreting it; just needed someone else's take on it.

As I've implied, I started to get a little impatient with it - but it has certainly continued to disturb me and keep me thinking, and those are two strengths that many films lack.

Nice analysis. This film sounds like Chabrol's La Boucher, and I would like to see it, but I question if so much mystery can ultimately be a little pretentious? With all of that punishing and free-floating guilt, all of those slow scenes and flat pace, I wonder.

Yes, I wondered too as I was watching the film, but without giving anything more away, I think there are theories you can suggest based on the characters and details about them. It's a compelling film to think about. I'd love for you to see it so I can get your insights.