How to Use Your Imagination: How to Train Your Dragon 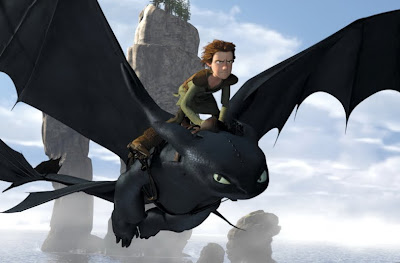 The film jumps right into the action. Hiccup (voice by Jay Baruchel), an inventive blacksmith’s apprentice and the spindly, useless (in Viking terms) son of Viking chief Stoick the Vast (voice by Gerard Butler), introduces us to the cozy Viking microcosm of the Island of Berk, and explains that the island’s only drawback is the pests: dragons. What follows is a dazzling, highly detailed set piece battle in which dragons of all kinds attack the island at night, set the village ablaze, and carry off the islanders’ livestock. During the battle it is clear that the inept Hiccup is a big disappointment to his chieftain dad with his tree trunk-sized arms and knotted red beard. Hiccup is always getting in the way with his latest invention designed to bring down the elusive Night Fury, a black dragon no one has ever sighted.

But Hiccup’s machine works. He downs the Night Fury, finds it wounded and trapped in a forest canyon, replaces its missing tail fin with a mechanical fin, befriends it, and realizes he can’t become the dragon-slaying tough guy his father wants him to be. You know where this is leading – that the answer to the Vikings’ problem is befriending the dragons, not killing them, and joining together with them to kill the gargantuan queen of the hive that has kept the other dragons busy feeding her – but all along the way the film entertains with a vivid world evoked by imagination and talent.

Jay Baruchel provides the perfect voice for Hiccup, the mechanical-minded Viking lad who is out of his league when it comes to killing dragons, and Butler offers more depth and feeling with his voiceover for Stoick the Vast than he has done in many of his recent live-action performances. Meanwhile, the computer animation achieves subtle body language and expressions that show how far this element of computer-generated artistry has come. In the scene in which Viking father and son try to have that heart-to-heart talk they’ve never been able to have (Viking chieftains have trouble baring their feelings), Hiccup’s expressions and postures of discomfort, and Stoick’s gruff attempts at openness, are as clearly defined as any live-action scene of the same kind. In addition, America Ferrara does a great job of voicing Astrid, the board-thin tomboy dragon-slayer wannabe who hits Hiccup one minute and then kisses him the next.

Though the look of most of the dragons goes for round-faced, bulbous caricatures (I see dragons as more streamlined), their variety and characteristics are engaging. There are Gronckles, Zipplebacks, Terrible Terrors, and Monstrous Nightmares – too many to sort out.

Most importantly, the mysterious Night Fury, the dragon that Hiccup names Toothless and trains to use its prosthetic fin, is given convincing, expressive life. With its blunt lizard’s face, large reptilian eyes, bats’ wings, stingray tail, and scaly black body, Toothless has a substantial presence, first as a frightening, mysterious creature, later as Hiccup’s faithful companion. In the air, Hiccup and Toothless offer thrills to equal the flying scenes in Avatar.

Throughout, the film offers memorable imagery. The opening attack on the Island of Berk is a feast of motion, color, and detail; watch for the shot of the dragons carrying off the sheep in the net designed to catch dragons. In one scene, Hiccup and Toothless find themselves in the midst of a dense flock of hundreds of dragons emerging from the fog, leading our heroes to the dragon hive that is like a vision of hell depicted by Hieronymus Bosch. When the Vikings illuminate the dragon hive, they reveal swarms of dragons clinging to the cavern ceiling like the creatures in Aliens. Artfully, the battle between Toothless and the queen dragon is shrouded by clouds lit up by the flashes of their fireballs.

With its funny, thoughtful writing and its engaging artwork that ranges from the whimsical to the terrifying, How to Train Your Dragon is my pick for best choice at the local multi-plex these days.

Yeah, I liked this movie a lot too. Seems that more often than not, the cartoons have it on the live-action films (which are increasingly like cartoons, and not in the best sense, but I digress...). I found Hiccup somewhat annoying (though I concede he was supposed to be) and the narration over the opening and closing was a mistake, albeit a relatively harmless one. But the main dragon was a fantastic creation and the movie's storytelling chops were excellent.

Thanks. Glad you liked it too. I was reluctant to see it at first. Some animated features are too much the of the same old thing - but this one was engaging. Yes, the Night Fury certainly had a realistic texture and substance to it even with its whimsical appearance.