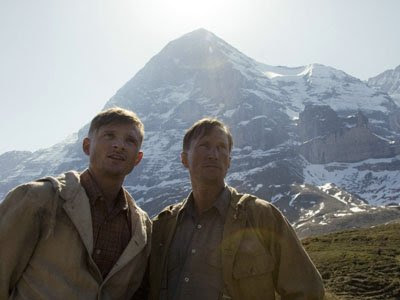 For a Bavarian, climbing is in the blood. Growing up in Bavaria, my grandfather and his brothers answered the allure of that uncanny adrenaline high that comes with summiting, and they climbed the peaks of Bavaria and Austria before World War I. When climbers Andi Hinterstoisser (Florian Lukas) and Toni Kurz (Benno Fürmann) set out in 1936 to conquer the previously unclimbed north face of the Eiger, in Philipp Stölzl’s North Face (Nordwand), I paid very close attention to the focus on the comparatively primitive equipment they would rely on – boots without crampons, hand-forged pitons, hempen rope, woolen pants, and a small canvas rucksack. I shuddered to think of them – and my grandfather – relying on ropes like that, knowing that even the steel or fibre-reinforced nylon ropes used today can break!

Using such basic equipment, these climbers were part of a special breed. From experience, I know that Bavarians are mad about mountains and rock climbing. Back in the 80s, I hiked over the Wilderkaiser Range in Austria with my wife (then my girlfriend) and my German friends Hermann and Ina. Ina’s father, Wolfgang, was in command. Our tough-as-nails leader was well suited to his name. On one little sandwich and a small bottle of water with lemon, this middle-aged man with heart trouble led the way up the steep switchbacks, clambered up the talus, climbed through the notch as it began to snow, led us down an ice field, and beat us all to the climbing hut where we would spend the night. As we slogged up the last steep switchbacks to the hut, he stood on the veranda of the restaurant and encouraged us, or teased us, by holding up a mug of beer. Thus, watching North Face, it was easy for me to believe the toughness of the two Bavarian climbers, Andi and Toni, and their two Austrian competitors.

Making you feel like you are clinging to the mountainside with the climbers, North Face is a film so tense and frightening that I felt exhausted by the experience. When one of the Austrians declares, “My arm is frozen hard,” Toni says, “It will thaw out.” Uh, okay! Tied to the cliff face at night, covered with canvas sheets, they sleep through a snowstorm. They negotiate ice fields without crampons. When Toni loses a woolen glove, he can only embrace the suck and hold onto the ropes with his bare hand. Finally, when one of the Austrians is injured, they wrap him in a canvas sheet and lower him down the mountain, pitch by pitch. 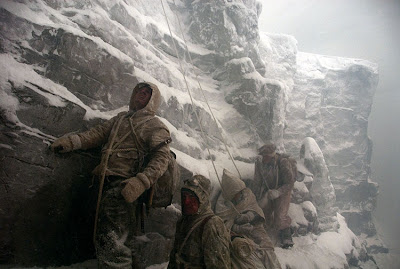 The story starts with the Nazi propaganda drive, as seen in a UFA newsreel that will remind you of Inglourious Basterds, to ensure that German climbers defeat the Eiger’s Nordwand, thereby adding glory to the Reich in the upcoming Olympics. But erstwhile soldiers Andi and Toni aren’t interested in furthering the glory of the Third Reich. They want to climb the Eiger for the challenge, and for each other, and once they start the climb, the film is a gut-wrenching depiction of raw survival.

Superb cinematography establishes the daunting expansiveness of the northern wall and the vertigo-inducing plummet of the sheer face. The rhythmic tapping of hammer on piton accents the musical score as the dangers are intensified by injuries and a snowstorm. In the film's most gripping scene, Andi needs to execute a crucial traverse during the swirling snowstorm. This means trusting the strength of a rope attached to a single piton as he swings like a human pendulum toward a point beyond a sheer wall that offers no holds or ledges. 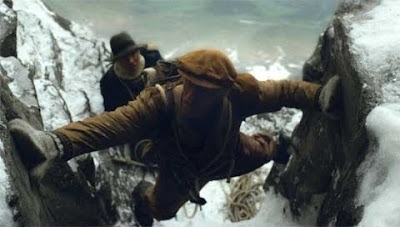 In striking contrast, high-society spectators make a pastime out of following the climbing from the Hotel Bellevue in the valley below. While the climbers freeze on the mountainside, the spectators dine in an opulent restaurant that serves a cake shaped like the Eiger. Among these spectators are Luise Fellner (Johanna Wokaleka), Andi’s childhood friend and now an aspiring photo-journalist covering the story, and her storymonger editor, Henry Arau (Ulrich Tukur).

An astonishing irony is that tourists are able to take a tram into the mountain to a cavern opening with a railing where they can look down the sheer drop or try to locate the climbers. (Remember Clint Eastwood dangling near that railing in The Eiger Sanction (1975)?) Later, in an effort to encourage the beleaguered climbers, Luise and a guide walk out onto a ledge during the snowstorm from another cave opening. I don’t doubt Luise’s Bavarian toughness, but her presence there momentarily robs the film of its suspense and grueling realism. Similarly, the film doesn’t know how to end, and we see Luise working as a photo-journalist in New York City.

I have always loved climbing dramas, starting with Third Man on the Mountain (1959), with Michael Rennie, and The Mountain, with Spencer Tracy and Robert Wagner, which I saw at the movies and on television in the 60s. I also enjoy the melodramatic but gripping movie The White Wall, with Lloyd Bridges as a mountain-climbing Nazi. Stallone’s Cliffhanger (1993) has its thrills as well. The gripping docu-drama Touching the Void (2003) tells the true survival story of an injured, abandoned climber, and achieves the realism these older climbing films lack.

But North Face easily stands out as the best film about climbing I’ve ever seen. You understand the allure of the climb when Toni looks up at the mountain one morning at 2:30 A.M.. The mountain seems to call to him through the clear air. He wakes up Andi, telling him it is time to start. "Gehts los!" In an American film, the line might be, "This is it!" Yes, this is it: a totally engrossing film of man's often futile contest with nature that you will not easily forget. 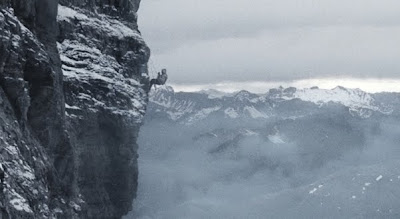 Posted by Richard Bellamy at 3:30 PM

Nice review! I'm surprised you didn't make a reference to "Into Thin Air."

Yuba Guy - Thanks for the comment. Into Thin Air is one of the best pieces of non-fiction I've read about a disastrous climb, and the made-for-TV dramatization is also very gripping. Thanks for mentioning it.