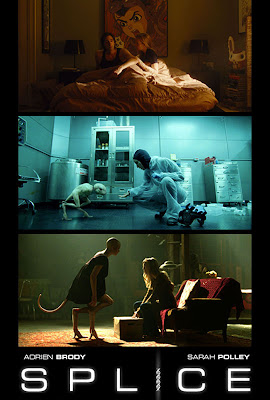 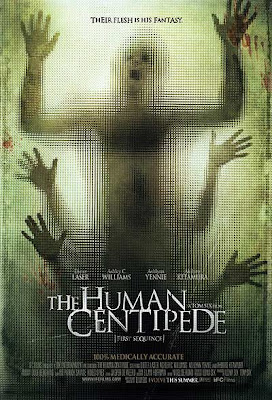 The Human Centipede starts out as a cheaply made template for any old horror movie with stilted to dreadful acting and awkwardly staged scenes, but it turns into a very disturbing depiction of the hell that human existence can be for some of us. Cleverly, it refrains from graphic depictions of gore. You cringe, expecting horrid Saw-like surgery, but it never comes. The film’s masterstroke is the scene in which Dr. Heiter describes the surgical procedure to his three victims. Strapped helplessly to gurneys, they writhe and sweat and cry out at the description of what the doctor has planned for them, and the effect for this viewer, just listening and looking at the doctor’s simple sketches, was gut-wrenching in the extreme.

Ironically, Splice starts as the more intelligent film with its commentary on the ethics of creating life and with the help of some very effective CGI images of Dren. Then the film devolves into horror-movie camp that seems discrepant with its opening tone. As a viewer who believes that the less CGI the better, I argue here that the depictions of the creature work better when she is all CGI. When we first see the little critter, we feel a sense of its otherworldliness, but it is a disturbing sense of awe because we know this thing has been created by meddling humans. When Dren is nearly perfectly human from the waist up, and Elsa starts dressing her in little girl’s clothing, and when Delphine Chanéac portrays her as a disoriented alien discovering her humanity (including sexuality), the visceral impact is diluted. Splice strays from its grave examination of ethical dilemmas halfway through the film, but The Human Centipede goes from campy spoof to gripping suspense to powerful commentary on the hell humans make for themselves and for others.

Both films present riveting images central to their stories. In one it is the image of three helpless humans bonded together in living torment. In the other it is the image of a chirping, big-eyed hatchling that hauntingly suggests its human origins and the godlike function of its makers. But the former sticks in the memory while the latter is deflated by subsequent silliness.

The chief drawback of The Human Centipede is most likely its premise. Who wants to see a movie in which three humans are stitched together into a human centipede? In fact, I approached it with a great deal of trepidation. I had read a good review of it, and I was tempted. I got it on Pay-Per-View and watched the first half, stopping after the disturbing scene in which the surgeon describes the process. I wasn’t sure I wanted to go on, but I was glad I watched the rest of it. As grim as this film is, there is a modicum of catharsis. It also depicts human compassion amidst the hell as the three victims comfort each other with the touch of their hands. In addition, Katsuro’s final act of defiance is a tribute to human dignity. Yes, monstrous humans always find a way to devise diabolical torment, but compassionate humans always find a way to keep hope alive.
Posted by Richard Bellamy at 3:38 PM

I liked Splice better than Centipede, which was shocking for the sake of it. But I see your point.

Nice analysis. I just saw Spice as well, and I was struck by its resemblance to Legion of all things when the wings appeared. The director Natali said that he was inspired by the sight of a genetically changed mouse, so that explains why Dren has such wide-set eyes. Even given its flaws, Splice is thought-provoking.

Thanks for the comments.

Simon - Funny thing is that Centipede makes its premise pretty clear before you see the movie, so the surprise shock factor is lost. Then, the surgery is not shown - so graphic shock factor is absent. What shock remains? Just the situation itself - and the hell that the victims suffer. It is shocking, but I'm not sure it's just for the sake of it.