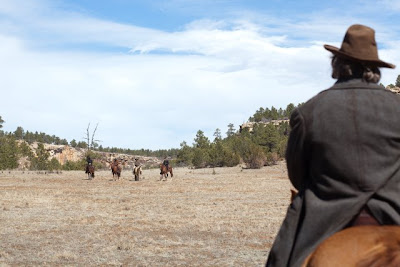 As I write about the Coen brothers’ adaptation of Charles Portis’s novel True Grit, it is hard to set aside my deep emotional attachment to the 1969 adaptation of the same novel, directed by Henry Hathaway and starring John Wayne, though I will review the Coens' film without making comparisons. Back in 1969, True Grit played for months at the movie theater where I worked as an usher, and I probably saw it at least thirty times. Later, on VHS and DVD, I saw it at least twenty more times, introducing it to my wife, who loved the movie too and considered Mattie Ross to be one of her favorite characters in literature and film. On top of that, John Wayne had always been my favorite actor. I grew up watching his earlier movies on television, and I saw most of his later movies as they came out in theaters, starting with The Alamo in 1960, all the way to The Shootist in 1977. Having seen the 1969 adaptation as many times as I have, I can recite much of the dialogue by heart, and many of its eminently quotable lines became useful catchphrases that my wife and I would fit into day-to-day situations. “Look at him grin. He’ll cheat you.”

First of all, I am entirely grateful to filmmakers Ethan and Joel Coen for making a Western, my favorite film genre, without nonsense or excessive pretense.

As does the 1969 version, the Coens’ True Grit faithfully sticks to the dialogue in Portis’s brief, dialogue-laden novel. For me, seeing the new movie was like seeing a new performance of a famous play. You might go to see Hamlet, for example, and it’s directed by another director, and it might be starring Laurence Olivier or Christopher Plummer or Jude Law, and although it might have a new look or tone, the lines are the same. You might not like the performers or the director’s interpretation as well as a previous production, but you still like the play because it’s the same story. Since so much of the dialogue in the Coens’ film is the same as in the 1969 version, I felt a warm feeling hearing those very familiar lines again, and I knew exactly what the next line would be, and like one of those staunch Tolkien enthusiasts whose passion for The Lord of the Rings encouraged Peter Jackson to adapt the novel into three epic-length films, I was disappointed when some of the great lines and scenes from the novel, kept in the 1969 film, were missing from the new adaptation.

In True Grit (2010), a fourteen-year-old girl named Mattie Ross (Hailee Steinfeld) hires a ruthless, one-eyed marshal named Rooster Cogburn (Jeff Bridges) to ride into the Indian Territory on the trail of Tom Chaney (Josh Brolin), her father’s killer. As Mattie’s righteous determination pushes Rooster and LaBoeuf (Matt Damon) onward, the hard-drinking old gunman and the morally upright, money-wise little girl develop a touching father-daughter relationship. In the end, Rooster Cogburn will do anything for Mattie Ross, and we see this clearly in the film’s most touching, most exciting sequence when Cogburn must get Mattie to a doctor. Both of them mounted on Little Blackie, Mattie’s beloved pony, they ride back the way they came, and we see their progress through Mattie’s feverish eyes. We see the dead bodies in the clearing; the winter-bare trees; and the brilliant stars overhead. After Little Blackie is ridden to death, Rooster Cogburn nearly dies carrying Mattie in his arms.

The Coens' production certainly does not lack fine performances, meticulous art direction, talented cinematography, or a touching musical score. It is an admirable telling of what, to me, is a very familiar tale. Jeff Bridges plays Marshal Rooster Cogburn as a croaky-voiced reprobate who’s too old and too fond of the bottle to serve the law in a more civilized time. At first, Bridges hides Rooster under his croaky voice and shaggy beard, underplaying the delivery of Portis's colorful lines to the point of monotone. Early on, Bridges clearly establishes his character's ornery nature. In one scene, he kicks two Indian boys off a veranda for tormenting a mule; then he kicks one of the boys off again. Later, however, especially in the sequence in which Rooster carries Mattie to safety, Bridges touchingly reveals a man facing the shocking realization that this is no country for old men.

Matt Damon is excellent as LaBoeuf, the bold but sometimes inept Texas Ranger, who expounds upon Texas Ranger code with sanctimonious histrionics. At first, he considers Mattie Ross just a little girl in the way, but later he admires her for her true grit, and his farewell to her upon abandoning the manhunt is a touching, earnestly performed moment that once again demonstrates Damon’s strength for delivering solidly talented performances in any film in which he appears.

Throughout the film, newcomer Hailee Steinfeld shows Mattie's morally upright determination in her eyes and in her sharp jaw, but sometimes her lines come off as merely recited. Nevertheless, in the scene in which she confronts murderer Tom Chaney, played by Josh Brolin as a thick-headed brute, Steinfeld's portrayal helps build drama and suspense, in contrast which some of the story's key scenes, the "Fill your hand, you son of a bitch" one-on-four shootout, for example, that feel flatly staged. In one of her best moments, Steinfeld as Mattie responds to her voiceover, "I am about to embark on a great adventure." She puts on her father’s coat, rolls up the sleeves, sticks her father’s cap-and-ball Colt in a flour poke, and rides out of town on the trail of her father’s killer. We’ve thrilled to this sort of scene in countless Westerns, when the hero, played by John Wayne or Henry Fonda or Gary Cooper or Clint Eastwood, rides out on the trail of vengeance, but here the avenger is a little girl in an oversized hat, riding a ten-dollar pony. This fine moment is followed immediately by Mattie's courageous plunge into the river, a thrilling scene that dramatically shows Mattie's implacable determination.

Together, a determined little girl, an old, alcoholic marshal, and a vain Texas Ranger, ride across a rather minimalist Western landscape of bare trees, empty plains, and drab rocks, captured by the cinematography of Roger Deakins, who filmed the stark Texas landscapes of No Country For Old Men and the wintery Missouri ridges of The Assassination of Jesse James by the Coward Robert Ford. For the most part, Deakins's subdued cinematography frames very little that distracts from the film's somber tone. In contrast, a number of shots stand out memorably: the extreme long shot of Rooster and Mattie riding across the plain against the sunset; the light falling from the Monarch Boarding House onto the dead body of Frank Ross; the glowing lantern in Bagby’s store that shows Rooster he and Mattie have reached safety; and the parallel upright lines of a bare tree, the ramrod-straight figure of the grownup Mattie, and the headstones in her family plot on a bare ridge.

The Coen brothers have made a fine, enjoyable Western. They have presented a new production of a classic story. Once again Mattie Ross, Rooster Cogburn, and La Boeuf come alive on the big screen. That, indeed, makes their film a great adventure, one I will definitely see again - though maybe not fifty times.
Posted by Richard Bellamy at 1:00 PM

Hokahey: It appears that our ages are close, based on the personal anecdote you relate at the beginning. For some reason I was thinking you were a bit younger.

Well, this excellent review comes out at a perfect time for me, as I just saw the film last night with a "delegation" of 10, including my wife, five kids, two older cousins, and a friend about my own age. We discussed the John Wayne film, and all came away greatly impressed with the Coens' work (I'd say it gets a 4.5 of 5 from me and pushed close to a Top Ten of the year berth, though I suspect it will narrowly miss) and the superlative work by Roger Deakins. Then came the inevitable "comparsons" to the technically inferior but still somewhat more emotionally resonant Hathaway film. It's all comes down to the emotional investment we've made in the Duke's Rooster Cogburn. Hokahey, I don't generally care to posts links to anything I write (I feel awkwars) but here is one today to a civil back and forth I've engaged in at Craig Kennedy's LIC, which charts my position on both films and why in the end, almost against all sense, I still feel closer to Hathaway's film:

http://livingincinema.com/2010/12/15/review-true-grit-2010-12/
I must say it's one of the most satisfying threads I've ever been involved in since I started blogging. In the end, there is general agreement that the Coens' film is excellent, but a parting of ways on Wayne, who I feel was superb as Cogbuen, as I've laid out here. Anyway, this is a passionate review, with a personal flavor, which is always the most interesting essays!

Yes, indeed, Sam, we are old. But thanks so much for thinking that I was younger! That made my day!!

Thanks for the link. I will check it out. We seem to agree here. The Coens made a fine film, but the Henry Hathaway film has more of an emotional impact with the tender relationship that develops between Rooster and Mattie and the masterfully touching scene at the end in Mattie's family graveyard. Hathaway's film also has Robert Duvall who, in his few minutes on screen, manages to make us feel something for this ruthless outlaw. In addition, just like no filmmaker will be able to remake and outdo the thrills of the Ben-Hur chariot race sequence, no filmmaker can outdo the drama, beauty, and thrill of the "Fill your hand, you son of a bitch" moment and shootout.

I just saw the movie tonight and plan to write a mini fluff review on my blog. I was searching out similarities of Winter's Bone and True Grit since I saw them both this week, stumbled across your blog and enjoyed the read.

Nanniepannie - Thanks for stopping by and reading. There are definite similarities between the two films. Both Mattie and Ree are involved in searches involving their fathers, they strike up partnerships with unlikely allies, and they both have true grit. In fact, I alluded to True Grit in my review here on Winter's Bone. Enjoy.