Hang on to your hats! The Adjustment Bureau 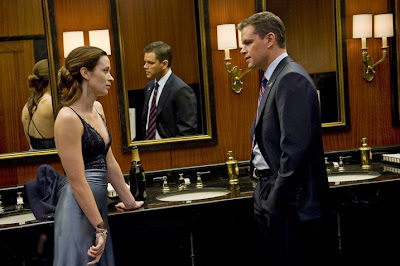 The Adjustment Bureau was originally slated to be released in September of last year, but many viewers were still on an Inception high, and even though the two films are entirely different, the other-worldly sci-fi nature of the former might have drawn viewers expecting more of the latter, only to discover that The Adjustment Bureau is not an action movie with a lot of shooting about different realms of non-reality. The Adjustment Bureau is a quiet little sci-fi film about true love and free will, and there’s absolutely no shooting in it.

The story is simple. Matt Damon is David Norris, a young congressman from the mean streets of Brooklyn successfully running for a senate seat on his charm and bad-boy attitude, and Emily Blunt plays Elise Sellas, a rather flip, free-spirited dancer, also with a promising future. When David loses his campaign due to a scandalous photograph from his past, he meets Elise, they look at each, they fall in love. But being together is apparently not the fate intended for them by the Chairman, whose Adjustment Bureau of nerdy goons in suits and outdated trilbies keeps people on the right course in life so that we imperfect humans don't entirely destroy the planet. Who the hell are the Chairman and the Adjustment Bureau? God and his angels? An alien lord and his minions? We never do find out. 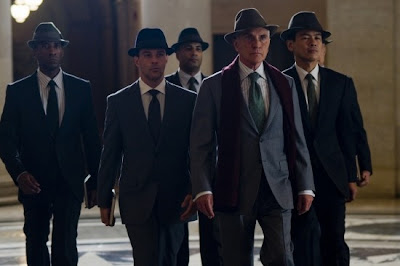 Indeed, intentionally or not, the hat dudes are hilarious at times, bungling their straight-backed pursuit of the errant David even though their little hats allow them to use doors that allow them to jump to another location in the city. But the fun is following Damon’s endearing perseverance in choosing to be with Elise and marry her, even though the hat guys keep warning ominously that this choice will damage their futures. And when things get a little too nonsensical, Terence Stamp steps in as Thompson the "Hammer," whose talent is smashing even the most passionate relationship. Just Stamp's ominous presence and voice, as mesmerizing here as way back when in Far From the Madding Crowd (1967), are enough to nudge you back onto the edge of your seat.

What would you choose? A bright future that might benefit the world, or the love of your life? Well, we’re kind of romantic at heart, so we are behind Damon all the way. Besides, Damon has a talent for investing himself in his characters in such a warm, charismatic way, that as a candidate for whatever office, we would definitely vote for him, and as a staunch Everyman bravely defying the Fates in order to pursue his free will, we are behind him throughout all his clever evasions of those nagging nerds with the trilbies.

Meanwhile, Emily Blunt, though not a raving beauty (her face is kind of flat; her eyes kind of wan), has a talent for convincingly portraying the woman of David’s dreams. It’s not just the Brit accent; there’s a style about her delivery, there’s a twinkle in her eye, and she makes us want David to want her.

The chief strength of The Adjustment Bureau is the chemistry between Damon and Emily Blunt, their touching portrayal of love-at-first-sight, and the film’s simplistic but poignant commentary about free will. This is not an earth-shattering film. It is a very satisfying one.

And if the dynamic performances of Damon and Blunt are not enough for you, or if the story’s ruminations about free will are not deep enough for you, then relax, sit back, and feast your eyes on the stunning cinematography of John Toll, who has loads of fun moving David and Elise through a rabbit’s-hole wonderland of regimented buildings and lines and angles (allusions to North by Northwest, a classic of love and pursuit by mysterious agents?), as the trilby guys use multiple doorways to try to outfox David and Elise. Watch out! Door #3 might take you to Yankee Stadium or the foot of the Statue of Liberty. Toll creates a whimsical wonderland of angular geometry that suggests, of course, the lines of Fate in the hat guys’ Notebooks of Destiny, or whatever those flat, leather-bound notebooks are - and I want one more than an iPad! 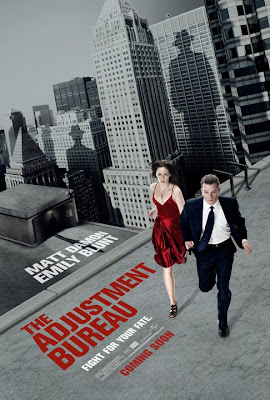 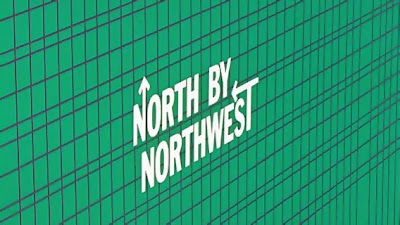 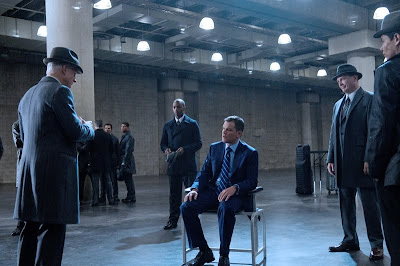 This maze of hallways, stairways, and alleys might also suggest the rat’s maze in which David is caught, and it’s invigorating to watch as shots of streets and hallways and skyscrapers create tension in this simple tale in which David and Elise pursue the fate that they have chosen for themselves in their imperfect and reckless but loyal human hearts. 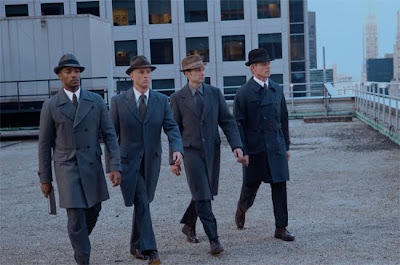 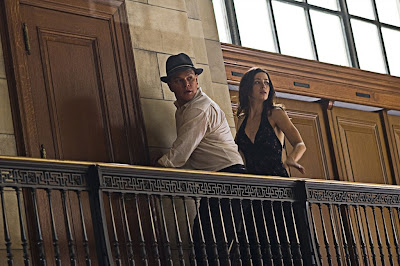 Posted by Richard Bellamy at 10:16 AM

I really like this kind off movie and I think Matt is a great actor. I'll definitely watch it!

"The chief strength of The Adjustment Bureau is the chemistry between Damon and Emily Blunt, their touching portrayal of love-at-first-sight, and the film’s simplistic but poignant commentary about free will. This is not an earth-shattering film. It is a very satisfying one."

Heck, Hokahey, I couldn't quite manage to get this one in over the weekend, sad to say. Your vital point above is precisely what I was expecting, and like you I'll take John Toll's work anyday. Interesting point comparing it to that earlier Hitch too. Excellent review!

Totally emotional. A great ride, and as you say, all about “was something keeping us apart?”. Thrilled you liked the ending. There are lots of moviegoers in this old world, and different ways to approach story. He certainly worked hard to win, no question about that. He also did a LOT of running.

Your excellent review has me really jazzed to see this one. I like both Damon and Blunt and it sounds like they have really good chemistry together. From the trailers, I like the look of this film and to find out that John Toll is the cinematographer is icing on the cake. Thanks for the heads up.

Tracy - Thanks for the comment. Matt Damon continues to give solid performances.

Sam, thanks. Again, this is not a monumental film, but I think it's worth seeing, especially for the cinematography.

Thanks, J.D., hope you enjoy the movie. It's well worth seeing for its look.

Roofing - Thanks for the comment. The film is a nice tribute to the tenacity of true love. You're right, Damon's character keeps running!

Nice analysis. I was bothered more by Elise's lack of characterization. She dares herself to crash a wedding at the beginning, but that's the last we hear of her having much of any kind of rebellious spark. Beyond that, she's just an oddly Natalie Portmanesque dancing damsel for Damon's character to be in love with.

At least the bureaucrats are well-dressed, but why are they all guys? I prefer the more female-centric otherworld of Orpheus.

You're right, FilmDr., Elise is immediately intriguing in the scene in the men's bathroom. (It's just me, I guess, I'm too fastidious, but I can't stand scenes in bathrooms, especially romantic ones.) Then, it seems, her development doesn't matter so much when David's quest becomes the focus - although she's kind of quirky and impulsive on the bus when she wants to spill coffee on David.