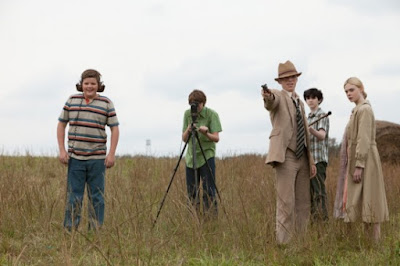 Beyond the two scenes I have praised above, the rest of the film plays like a Mad movie parody: all caricature and cartoonish hyperbole: Cary's braces; the girl in curlers; Charles's slovenly family; an inexplicable scene in which tanks blow each other up across the panorama of the whole town of Lillian, Ohio. Ron Eldard, whose performances are often dreadful, is dreadful as Alice's drunken, blubbery, whining, long-haired father. I winced when Alice hugs him. As Joe's father, Kyle Chandler is flat and unconvincing, even in his big dramatic moment when he supposedly embraces his son with full acceptance (another hug that made me wince).

Oh, the lens flares. In the scene in which Alice rehearses her speech before the train arrives, they are bright blue bars stretching across the entire frame, telling us, I guess, that this is a touching, idyllic moment. But we don't need a sign. We know the moment is touching because it works. Similarly, throughout the rest of the film, we don't need all that motion, noise, and silliness. We need good writing, good acting, good direction. We need young Joe Lamb's uncorrupted imagination.
Posted by Richard Bellamy at 8:00 PM

I like your crack about "the Alien, looking like a midget-sized Cloverfield monster," as it "moves fast, makes a lot of noise, but never generates a single second of drama or suspense." But I respectfully think that you were a bit harsh on the movie. I found much of it very entertaining, except for the weird gaps in the narrative later on. I got a sense that Abrams was so confident about getting our attention through Joe's and Alice's dramas that he didn't bother to flesh out the third act. Much the same happened with Spielberg's War of the Worlds, with Dakota playing Elle's role. In both cases, I think we were supposed to take all of the b-movie thriller conventions lightly with some pleasure in their cheesy thrills.

So, I guess I was more willing to forgive the film for its later problems because of the skillfulness of the set up and Abrams' sheer pleasure in evoking a youthful passion for filmmaking. Both X-Men: First Class and Super 8 hold up way better than such bilge as The Hangover Part II. The question is how anyone can face Green Lantern on a full stomach.

Ah Hokahey, while I commend you for peeling away the gauze and examining this film from all the pertinent angles, I have presided over this case and has decided to overule the prosecutor and dismiss the charges against the defendents J.J. Abrams and Steven Spielberg. Their collaboration has produced a film with appealing characters, a monster in the tradition of ET and a rather delightfully abstract variation on linear narrative that allows for a closer scrutiny of character.

Like Film Doctor, I felt this was a very entertaining piece, and would move to exonerate teh filmmakers for the narrative gaps, which never strained the bond between audience and character. There's a real sense of exhilaration in this film, which in this summer of multiplex sequels and mind frying entertainments, is no small achievement.

"Both X-Men: First Class and Super 8 hold up way better than such bilge as The Hangover Part II. The question is how anyone can face Green Lantern on a full stomach." I'm willing to agree with you there, FilmDr, and I haven't even seen The Hangover II; saw The Hangover and hardly laughed.

As for Super 8, I think we enjoyed the same elements. I forgot to mention in my review that I also enjoyed the scene in which Alice practices acting like a zombie. Well done.

But all of that was wrapped up in a poorly executed story about Cloverpatch trying to get his ship together. I was not willing to forgive - although I'm like you - I'm willing to forgive lapses and weaknesses when the central core of the movie captivates me. I simply was not captivated. Given the strength of the Joe and Alice characters, I needed just a little bit more out of the rest of the story.

Sam, we'll just have to disagree on this one, but thanks, as always, for your feedback. I always appreciate your comments.

I definitely see that the film is drawing on (copying) E.T. but it definitely doesn't create an alien we get to know and care for in the same way. To the credit of Super 8, I enjoyed the kids in this one much more than those in E.T.. But I definitely did not feel this film's "exhilaration" and I really feel that this movie is poorly made.