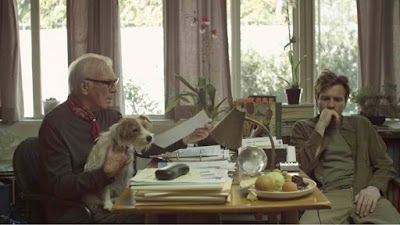 In Mike Mills’s Beginners Hal (Christopher Plummer) begins his life as an openly gay man after coming out to his son, Oliver (Ewan McGregor), at the ripe old age of 75. He also begins his decline toward death after finding out that he has terminal cancer. When his father dies, Oliver inherits his father’s highly intelligent dog, a Jack Russell terrier with separation anxiety and a sardonic humor rendered in subtitles, and tries to begin a relationship with a young French woman, Anna (Melanie Laurent), after a number of failed relationships.

In flashbacks and by means of slideshows that characterize the decades of Oliver and Hal’s lives, Beginners often charts Oliver’s deep loss and Hal’s brave steps to actualize his sexual identity with a whimsical tone, but this is a serious movie about coming to grips with the past and dealing with the realities of the present. With sensitivity and humor, once again delivering a solid performance, McGregor plays Oliver as a lost soul who wonders how his mother endured decades of marriage knowing that her husband was gay. Confused but impressed by Hal’s explanation of how he tried to play the straight husband in order to make the marriage last, Oliver attempts to make his new relationship work.

As Anna, Oliver’s girlfriend, Melanie Laurent shows a talent for very expressive acting. As demonstrated in Inglourious Basterds, Laurent uses the cast of her eyes and the movements in her lips to communicate a lot. Fittingly, she gets to play her first scene, when she meets Oliver at a costume party, virtually silently. Explaining that she has laryngitis, dressed appropriately as Charlie Chaplin, Anna communicates by means of notes on a pad of paper, but Laurent’s lively eyes and the uncanny animation in her lips communicate even more, making her performance a very engaging one.

A quiet and very understated film, Beginners is not an entirely happy one. Oliver loses his father. It looks like he might lose Anna as well. But the film is always worth watching for its humor, for the performance of a very talented Jack Russell, as well as for the three main human performances. Christopher Plummer’s subtle performance as Hal, an old man spreading his wings to live out his true sexual identity as his life is ending, is a believable, dignified performance that is definitely worth watching.
Posted by Richard Bellamy at 8:01 PM

While I completely agree with you, Hokahey, on the magnificence of Christopher Plummer's affecting performance, I had a rather mixed reaction to the film. It almost seemed too self-consciously quirky and rather uneven in the way it incorporates some newsreel footage to establish time and place. Some of the drama seems forced and not especially convincing. Yet, I am in an extreme minority here, and will at some point give it another whirl. I'll agree that Plummer's work takes the film a long ways.

I'm not passionate about this one. I enjoyed it, Sam, and you could be right about its self-conscious quirkiness and some of the forced drama. I have accused a number of other indie comedies such as Sideways and Garden State for being "self-consciously quirky" - even though I enjoyed elements in those movies. Does it seem that a lot of small indie comedies are like this? What's one that's not so contrived and intentional in its quirkiness? Or maybe that's just an aspect of the genre.

I saw another one this past weekend that may well fall under this umbrella,Hokahey, a film by Azazel Jacobs called TERRI, which seemed to thrive on this quirkiness. I thought it was fair enough, though not as stellar as his previous film, MOMMA'S MAN. I loved SIDEWAYS, but not so much GARDEN STATE.

To answer your question "What's one that's not so contrived and intentional in its quirkiness?" I'd pose CEDAR RAPIDS, which released in early 2011. It's a hybrid of convention and original ideas that comes off mightily. I'd say it's the best comedy of the year so far, with the unlikely BRIDESMAIDS as a close second.

This is definitely one I've wrestled with. I adored it when I walked out, but almost instantly began recounting the many, many "indie-fantastic-quirky" elements to it, and thinking, "man, that talking dog was kind of lame, huh?"

But the more I think back on it, the more I think Mills really earns his quirk, so to speak, much as Wes Anderson did in Rushmore as especially The Royal Tenenbaums. Mills never loses track of the people in his story, and how they feel about what's going on, and all of his quirk is a direct, honest expression of those moments.

Take the roller-skating-down-the-hotel-lobby moment. Should be kind of forced, but what better way to recreate the feeling of walking on air that comes with a perfect moment in a new relationship? Or the talking dog for that matter, which is certainly extraordinarily cute, but also speaks to Oliver's desperation for any sort of emotional connection.

And everything else in the movie is so - almost overwhelmingly - honest and forthright that even the quirky moments I was a little more troubled by (introducing Anna while she can't speak is a huge cop-out, even if, like you, I thought Laurent was extraordinary) didn't take away too much from the whole. Oliver's musings on the privilege and subsequent agony that comes from living in a time that gives him the benefit to dwell so elaborately on his own feelings was particularly acute.

And this was the first time in a very long time that I really enjoyed a Ewan McGregor performance. And that's not for nothing.