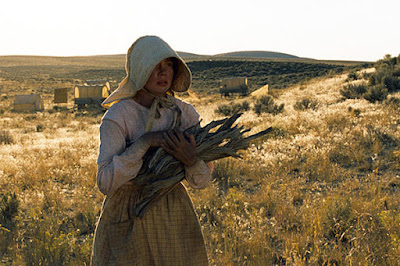 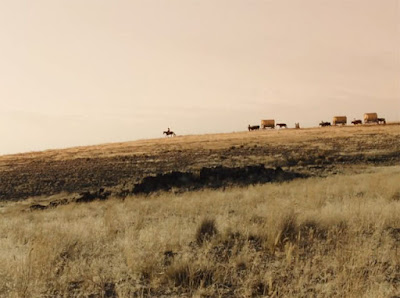 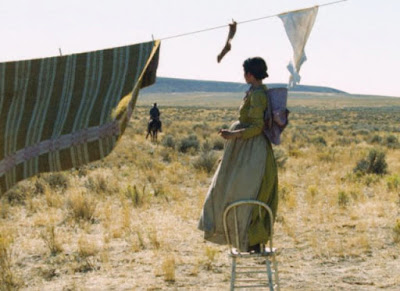 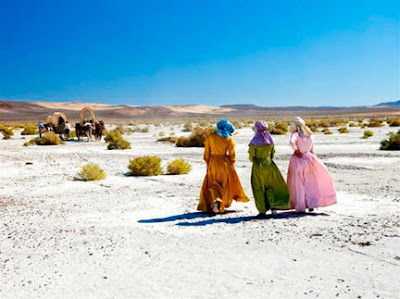 Director Reichardt captures the reality of how time passed on the Oregon Trail. During the opening sequence, silent except for the sound of water and birds, the camera stays on wagons crossing a river and travelers toting belongings to the other side. This goes on until one of the men (Paul Dano) carves the word “Lost” on a log, and the wagon train moves on. Later along the trail, women hang laundry or knead bread or collect firewood, usually without a word. In one scene, Emily Tetherow (Michelle Williams) must fire a distress signal, and the camera stays on her as long as it takes for her to get the rifle, prime the powder pan, fire the load, stand up the rifle, put a bullet in her mouth, measure in another load of powder, take the bullet out of her mouth and stick it in the muzzle, ram it down, prime the pan again, and fire off the second shot. The real-time realism of this moment is one of the best things I’ve seen on screen all year. 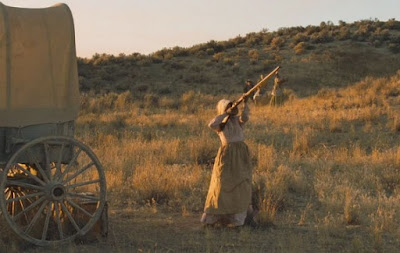 Except for Bruce Greenwood’s portrayal of crusty, hairy-faced old mountain, Stephen Meek, which leans toward stereotype, the performances are muted and naturalistic. With little conflict among the travelers, played by Williams, Dano, Shirley Henderson, Neal Huff, Will Patton, Zoe Kazan, and Tommy Nelson, the main conflict here is between humans and a wilderness that stretches mile after merciless mile. With its slim story and spare dialogue, much of it barely audible as the men stand off from the women to discuss their plight, the film’s true stars are the cinematography and the landscape.

The camera, lingering on lengthy long shots of the three wagons making their slow progress, always accompanied by the squeak of an axle, clearly captures the arduous nature of plodding along, step after step, across plains or salt flats. Shots present a variety of earthy colors. At the same time the land is wondrously beautiful, it is hopelessly empty. After the river crossing sequence, the wagon train moves to the left of the frame as the same wagons and travelers cross the ridge behind them in one of the most magnificent dissolves I’ve ever seen.

Beyond the visual realism, Meek’s Cutoff depicts the trepidation and despair felt by three ordinary families who realize they have jumped off into extraordinary circumstances. Set in 1845, the film easily calls to mind the ordeal and tragedy that would take place in 1846 when the Donner Party’s hopeful journey turned into a desperate rout as the members of the wagon train started starving even before they reached the Sierra Nevada and the snow started to fall. At one point in the film, Thomas Gately (Paul Dano) bemoans the fact that he did not “heed the writing,” and the film evokes the gut-wrenching gravity of faulty decisions already made or a decision yet to be made that could well turn out to be fatal. The travelers’ doubts and fears are muttered in the darkness of night, for perhaps they know they should have heeded the type of advice Donner Party member Virginia Reed would write in 1847, “Never take no cutoffs, and hurry along as fast as you can.” 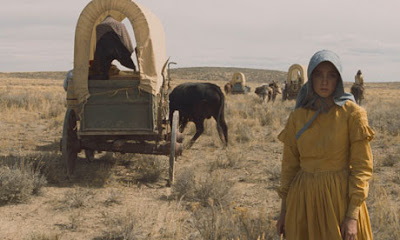 Posted by Richard Bellamy at 2:07 PM