The Two Worlds of Total Recall 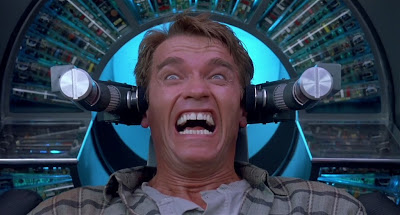 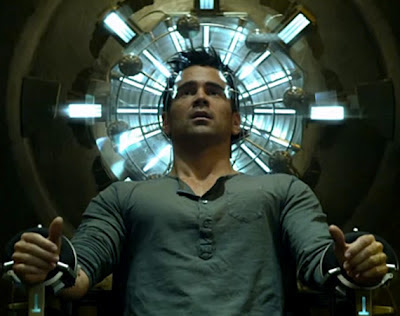 I had seen Paul Verhoeven’s Total Recall when it came out in 1990, but I didn’t recall (ha!) how bad it was until I watched it the other night on Comcast. All right, it has a young Sharon Stone in sports bra and exercise tights demonstrating her flexibility in a fight with Arnold Schwarzenegger when it turns out she's a secret operative and not his wife. But the whole film plays like a bad late-70s, early-80s science fiction film using 1950s-quality special effects without any sort of textured atmosphere. In addition, in keeping with the late-70s, early-80s look of the film, most of the actresses have perms, clearly demonstrating what a bad hairstyle that was.

The basic plot of both the 1990 Total Recall and the 2012 “reimagining” is one involving a lot of chases and shootouts as a man (Arnold Schwarzenegger/ Colin Farrell), who starts as average-Joe Douglas Quaid but may in fact be secret agent Carl Hauser, runs from agents trying to kill him and attempts to stop the power-seeking villain, Cohaagen, from wreaking havoc in some way. (In the original film it’s all about controlling Mars and the mining of a precious metal; in the 2012 version it’s all about invading the Colony of Australia in a world in which uncontaminated living space is scarce.) In the 1990 version, the chases and shootouts become boring early on. In the recent version, many of the chases and shootouts are injected with a lot more imagination and some nice surprises.

On top of that, Total Recall (2012) has the distinct advantage of pitting Kate Beckinsale as the villainess, Lori Quaid, against Jessica Biel as the heroine, Melina. Action movie veterans Beckinsale and Biel provide one of the film’s main attractions when they go up against each other. Beckinsale’s thin face becomes frighteningly fierce, and she seems a lot more flexible and agile than Biel, probably due to all her Underworld experience, but Biel exudes convincing strength and determination. It’s up to you as viewer to decide which of them kicks ass the best. Beckinsale or Biel? Sometimes torn between the two is Quaid/Hauser, played with sensitivity and a compelling driving force by Colin Farrell.

As an action film, however, the big plus for Total Recall (2012) is that the action takes place in a world that is always interesting to look at. Most of the sets for the 1990 film are sterile, over-lit hallways . The settings in the environment dome on Mars, obviously shot in sound stages, look as unlived-in as TV sit-com sets.

The 2012 film evokes a darker world in a future in which chemical warfare has restricted the human population to two population centers: The United Federation of Britain (Great Britain and Europe) and The Colony (Australia). The two areas are linked by “the Fall,” a massive subterranean transit system (kind of like sending a skyscraper through a subway tube) that whisks you from area to area in seventeen minutes. Since uncontaminated space is at a premium, The Colony’s cityscape is a mass of structures piled on top of other structures, sometimes extending laterally between skyscrapers. This upper level slum provides a striking setting for one of the chases as an extreme long shot shows Douglas Quaid, pursued by Lori, jumping from dwelling to dwelling.

“The Fall” is an interesting device that fits dramatically into the end of the film, but Total Recall (2012) is not always original. Though its images of over-crowded Oriental districts dripping with rain provide atmosphere, the look of the Colony is straight out of Blade Runner. The metropolis of The United Federation has a different look, however, with famous London landmarks such as Big Ben lost in the megalopolis that has overgrown the original city. In addition, the white robotic soldiers that relentlessly pursue Hauser immediately call to mind the robotic soldiers in Star Wars: The Phantom Menace, especially when we see perfectly regimented columns of them forming up for the invasion of “The Colony.”

Total Recall (2012) plays it straight and serious and delivers engrossing action and lots of detail to fill your eyes, but both films include logic flaws glossed over for the sake of the action. In the 1999 version, we get a futuristic world that has robot-driven taxis, and yet Douglas Quaid and his fellow workers still break up rocks with jackhammers. On Mars, the colonists live in domes to protect them from the vacuum outside, but the glass in the domes is easily breached by a bullet, and when precious oxygen along with unlucky colonists get sucked outside, the emergency shields can only be lowered if you a red button. Why aren’t they automatic?

Meanwhile, in the 2012 version, when Lori uses robot soldiers as shields, they seem pretty impervious to bullets, but at other times, they go down after a shot or two. It’s a nifty effect when “The Fall” decelerates and everyone in inside goes weightless (yeah, Inception), especially nifty when Quaid/Hauser and Melina are about to be shot by security guards, but when they ride the top of the contraption into the station, you’d think they wouldn't be able to stand up against the oncoming rush of air. Ah, flaws regarding logic and the laws of physics seem to be something that science fiction films have trouble avoiding.

The 2012 Total Recall inserts tributes to a couple of iconic images from the 1990 version without making a big deal out of them: the buxom lady with overcoat and handbag (Quaid's disguise in the 1990 version) going through security, and the famous triple-breasted prostitute, but the film successfully turns itself into a serious story with some great acting by Farrell and Beckinsale and some memorable action that takes place in a world I’d like to see again.
Posted by Richard Bellamy at 5:55 PM