“THE MORNING OF THE VOTE:” Spielberg’s History Lesson: Lincoln 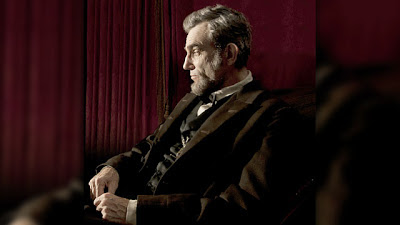 When it comes to the Civil War, I have always been more interested in what it was like for the individual nameless soldier thrown into the vast hell of combat rather than in the large mythologized characters of Grant and Lee and Lincoln. This will be shocking to many Civil War enthusiasts, but my least favorite Civil War novel is Michael Shaara’s The Killer Angels. It does little to depict the gritty horror of the most horrific battle in American history. Instead, it focuses on famous generals who stand around discussing strategy and spouting memorable quotations. My favorite Civil War novel, which focuses more on individual soldiers and memorably presents the Battle of Antietam as a savage slaughter, is Confederates, written by the Australian author Thomas Keneally.

For this reason, one of my favorite moments in Spielberg’s Lincoln involves the nameless “Second White Soldier,” played by Dane (Chronicle) DeHaan, who stands nervously in front of Lincoln, swearing and stuttering as he tries to recite the Gettysburg Address. I suppose the device is a little corny, but I see this character. He is real. As for Lincoln, Daniel Day-Lewis does a masterful job of portraying the thoughtful, erudite, yarning, folksy side of the great American president, speaking in a tight-jawed, laid-back country voice. However, in a long film that has trouble generating a compelling pace, Lincoln’s yarns wear thin. Day-Lewis injects some life into his character and the film when he pounds the table and willfully rants about getting what he wants: the Thirteenth Amendment, and very poignant are the quiet moments with son Tad (Gulliver McGrath), who is fascinated by images of slaves (a nice way to illustrate the film’s focus), sets up his lead soldiers on War Department maps, and drives his goat-drawn cart around the White House. But Lincoln the man is eventually overshadowed by big events and hobbled by Spielberg's reverent tone.

Spielberg’s topic is a grand one: the passing of the Thirteenth Amendment that ends that “peculiar institution” of “involuntary servitude” that is America’s Holocaust. But as Spielberg gets wrapped up in treating this grand topic with the same high reverence he treats the tragic ordeal of Jews in the Holocaust in Schindler’s List, throwing in the same close-up of a flame that dissolves to an image of Lincoln giving his second inaugural address, Lincoln the man recedes into the background of House bickering, pushed aside too by the film’s painstaking effort to eke climactic moments out of each House member’s momentous vote. Amidst the squabbling, Tommy Lee Jones takes center stage as Thaddeus Stevens, though I found myself preferring the solid presence of David Straithairn as Secretary of State William Seward.

Spielberg’s film is an enjoyable, well-performed, serviceable history lesson, full of chuckle-inducing quips and anecdotes as it focuses narrowly and reverently on one event in Lincoln’s last year alive even though it is based on a work of non-fiction (Doris Kearns Goodwin’s Team of Rivals: the Political Genius of Abraham Lincoln) that covers multiple dramatic events during the last five or six months of the Civil War. Yes, yes, I know Lincoln is about the Thirteenth Amendment and not about the Civil War, but I feel the film loses power and historical context as Lincoln spins his yarns and congressmen quibble over whether or not all men are created equal, and I found myself hankering for the story to break out of its claustrophobic interiors into something shocking and dramatic that might have broken the slow pacing and provided a panoramic backdrop for this historic debate.

My favorite scene, a masterful image, comes early in the film when we see Lincoln’s spooky, ominous dream. This hints at the great film Lincoln could have been - a haunting look at the last months of the great man's life as he juggled management of political rivalry over the Thirteenth Amendment with orchestration of the final fierce campaigns of an epic war.

Why not parallel the suspense and drama of the House debate with some cuts to the suspense and drama of the war? When Secretary of War Edwin Stanton (Bruce McGill) describes his plans for the bombardment of Fort Fisher in which Union ships will fire more than a hundred shells per minute, why not cut to a shot of this fearsome assault made possible by the North’s vastly superior resources? Before Lincoln visits the Petersburg battlefield, why not show Grant’s all-out advance on the Confederates’ fifty-three-mile-long defenses, to show Grant’s assertive total-war battle tactics and how Lee was still able to escape so that he could stubbornly prolong the war? Instead of something expansive, Spielberg takes time for a puzzling, lifeless, overly reverent tableau depicting the surrender at Appomattox. Set to a choral lament, the image seems to pay last-minute homage to Robert E. Lee. The violence is kept off-screen to the very end when Lincoln and his wife, Mary, played splendidly by Sally Field, go off to Ford’s Theater, (an episode that very closely resembles Lincoln's departure for the theater in this summer's Lincoln: Vampire Hunter). When a man runs on stage to shout, “The President’s been shot!” it is on the stage of another theater in which Tad is viewing a swashbuckling play.

For good or ill, Spielberg keeps his narrow focus, the vote is won, and Thaddeus Stevens’s African American housekeeper lies in bed with him and reads the Thirteenth Amendment aloud. (Thankfully, it is short.) In this way, Spielberg teaches us and teaches us and teaches us. Indeed, he doesn’t trust us to know a little bit about the period. When Jared Harris first appears, it is obvious that this stern, bearded, cigar-chomping commander is Ulysses S. Grant, but the subtitle reads, ULYSSES S. GRANT. Conversely, subtitles name the three Confederate peace commissioners, one after the other, even though we don’t need to know their names; we know they are the peace commissioners and that is enough. Later, when the congressmen gather for what is obviously the beginning of the debate, we see the words, THE HOUSE DEBATE BEGINS. When it is obvious that the vote is going to take place in a day or two, we cut to custodians setting things up in the empty House chamber, and John Williams’s momentous music cues us to what we know is going to take place, but still the subtitle tells us it is THE MORNING OF THE VOTE.
Posted by Richard Bellamy at 12:24 PM