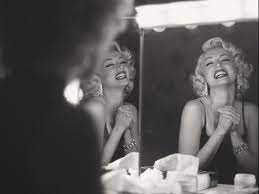 Blonde is a beautifully disturbing film. The story is hard to watch, but you can't take your eyes off the film's images. Alternating use of color, black-and-white, and various aspect ratios that hearken back to the American film industry’s classic era make this a stunning, visual feast – while the story is emotionally exhausting.

This is not a standard bio-pic that chronicles famous episodes in a celebrity’s life with bland fidelity to the facts and what everyone said. This is a bio-pic of internal rather than external events. It is a nightmarish, stream-of-consciousness, inner biography of a troubled woman’s descent into painful crisis.

The cinematography makes the disturbing elements beautiful. Images float and melt and focus into awesome vividness like the stream-of-consciousness images of a Terrence Malick film.

Pay attention to sound. The use of ambient background sound and white noise fixes you in sometimes mundane moments in the story. Harsh, alien sounds destroy any moment of peace or beauty.

Meanwhile, the camera focuses on objects – a box, a glass, a black phone - drawing your attention to the scene, making them vivid players in the story.

Ana de Armas invests herself in Marilyn so deeply that there is no taint of self-conscious artifice. Norma Jean battles with being Marilyn Monroe, and de Armas shifts touchingly and convincingly between the schizophrenic sides of a disturbed individual haunted by a harsh past who is trying to survive in a world of vampiric, rapacious males – the many jeering, catcalling, twisted, open-mouthed, ugly faces of men watching Marilyn making an appearance - feeding off Norma/Marilyn’s delicate vulnerability.

Posted by Richard Bellamy at 10:16 AM