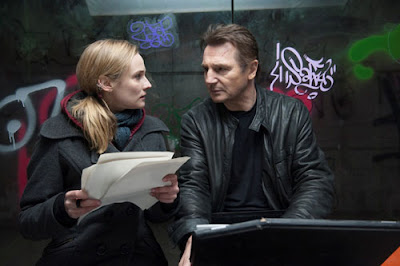 As I sat enjoying how Unknown builds some interesting atmosphere and considerable tension to its own credit, I was pleasantly entertained by how its derivative plot echoes classic thrillers such as Vertigo, North by Northwest, and The Bourne Identity, and a lesser known Gregory Peck thriller, Mirage (1965), in which a physicist suffers amnesia, endeavors to substantiate his identity, and runs into a plot to get his secret formula for a clean atomic bomb. Dubious identity, deception, amnesia, assassination plots, secret formulas: all of these elements can be found in the thrillers listed above as well as in Unknown, the new thriller starring Liam Neeson as a man who may or may not be bio-physicist Martin Harris.

In addition, the visually engaging atmosphere of snowy Berlin, and plot elements such as the ex-Stasi inspector, played by Bruno Ganz, evoke those splendidly intricate, somber Cold War thrillers of the 1960s, classic films like The Ipcress File (1965) and The Spy Who Came in from the Cold (1965), as well as the more obscure A Dandy in Aspic (1968), a favorite of mine, with Laurence Harvey as a British double-agent and assassin hounded by a monomaniacal Tom Courtenay, with East Berlin evoked as a dismal Cold War limbo.

I liked how Unknown taps into that bygone genre. We have the bearded doctor, who looks like Freud, going on about the mysteries of the human brain; Ganz’s great performance as the proud ex-Stasi, dying of lung cancer from cheap Commie cigarettes, who can tell when a man is lying or not; and all the uptight German officials demanding Martin’s passport, while underlings smirk superciliously in disbelief. Diane Kruger does a wonderful job of adding to the trappings of that genre by portraying Gina, the street-smart Bosnian illegal alien, a taxi driver until a fateful accident lands Martin and her in the Spree. Kruger as Gina is feisty and resourceful, and I love her tight-lipped, accented English, and her tongue-in-cheek delivery that recalls Inglourious Basterds.

Yep, there’s nothing new in Unknown, but I have to admit I enjoyed watching it until the ending throws Neeson’s character into a 360 that’s hard to justify. The setting engages, the inevitable car chase has its thrills, and the acting is more than serviceable. Neeson has cast a mold that he repeats with solid presence in numerous films (Unknown resembles Taken (2008) in many ways). Ganz stands out for his textured portrayal of the old Stasi inspector, and Kruger is fun to watch as she bravely helps Martin when all she really wants to do is make enough money so she can get out of "zhis place." As Martin’s wife (or is she?), January Jones is attractive, bland, and affectless, though her soft delivery might remind you of Janet Leigh, which is at least in keeping with the film’s Hitchcockian aspirations.
Posted by Richard Bellamy at 3:24 PM 2 comments:

I Am Number Four 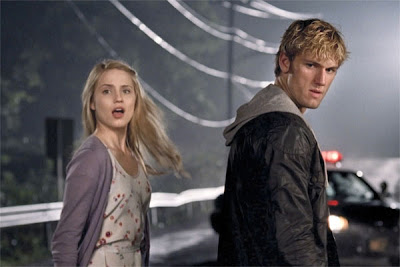 It is easy to see that I Am Number Four is based on a best-selling young adult science fiction novel, the first in a proposed series. Its main characters are teenagers. Its setting is the typical small-town public high school replete with outcasts, nerds, and bullies. Its main character, John Smith (very handsome Alex Pettyfer), has paranormal powers, attracts the pretty outsider girl, and saves her from bullies, just like Edward in Twilight. Turns out that John Smith is a Lorien on the lam, one of nine such Loriens endowed with Legacies (special powers), pursued by nasty aliens called Mogadorians, who look like a cross between a piranha and Gary Busey and are determined to kill all the Loriens who stand in the way of their intergalactic conquests – I think. Like most teenage aliens on the run, John wants a normal life, so against the paranoid wishes of his guardian, Henri (Timothy Olyphant), he picks the easiest way to a normal life: he enrolls in a high school in Paradise, Ohio.

What follows is stock Disney Channel teen melodrama. John captures the attention of Sarah (Dianna Agron), the wholesome, blonde-haired girl who is into photography. This makes jealous the resident bully, Mark (Jake Abel), and John makes things worse for himself when he defends the persecuted nerd, Sam (Callan McAuliffe), who believes in all things extraterrestrial. With all the cyber bullying that goes on, John’s face is plastered all over the Internet, and the Mogadorians drive in for the kill, towing a horse trailer containing twin CGI monsters that moved too quickly for me to describe. In the final battle, John and friends are saved by a Beagle that turns into a mace-tailed creature and a cute Aussie chick, who drives a Bugati, Hollywood’s ubiquitous motorcycle of the moment. She turns out to be Number 6. Ooh, aah! (Where the fuck is number 5?) And, you guessed it, John, 6, and Sam journey on, keeping ahead of the Mogadorians as they search for the rest of the Loriens, thereby setting us up for the sequel. 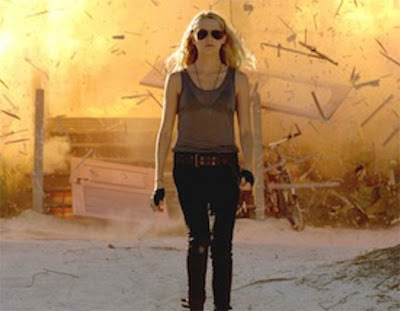 Now, I’m a sucker for any halfway decent sci-fi movie, but I’m insulted by a movie that plays like an episode from a Disney Channel television series. The pace is slow, the urgency is smothered by stock high school scenes, and the supposedly sinister Mogadorians are innocuous. I have to say I enjoyed the faithful Beagle who turns into a cross between a lynx and an ankylosaurus, but there’s no suspense here and no sense of alien awe in connection with John’s discovery of his powers. Not one framed image stands out to be remembered. The only thing that this film elicits is an intensified disdain for movies that are part of a series, movies based on television shows, and movies like this one – anything that threatens to turn movies into television shows, a thing I fear more than an alien invasion.
Posted by Richard Bellamy at 11:04 AM 3 comments: 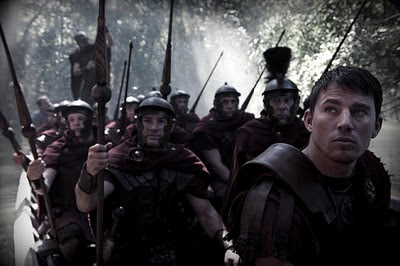 The Eagle, an earnest adaptation of Rosemary Sutcliff’s The Eagle of the Ninth, offers a solidly engrossing first half as Marcus Flavius Aquila (Channing Tatum), the son of the commander of the “Lost Ninth Legion,” assumes command of an isolated fort in Roman-occupied Britain in the 2nd Century AD. As the stolid by savvy Marcus, Channing Tatum exhibits commendable screen presence as he shapes up his fearful, grumbling Latin grunts like an American officer bolstering reluctant soldiers in a forlorn Vietnam firebase. Marcus senses danger and expertly prepares his men for a nighttime assault. Unfortunately, excessive fast-shutter speed camerawork makes most of the action a blur. Meanwhile, the film’s memorable long shots frame this Roman outpost of progress under brooding skies and establish its very convincing presence.

After a thrilling scene in which Marcus forms his men into the testudo in order to charge through a Celtic horde and save Roman captives from decapitation, the wounded commander ends up convalescing in a tranquil Thames-side villa where he gets the aged good council of Uncle Aquila (Donald Sutherland). There, Marcus plans a journey to retrieve the Ninth’s golden eagle in order to reinstate his dead father’s lost honor. 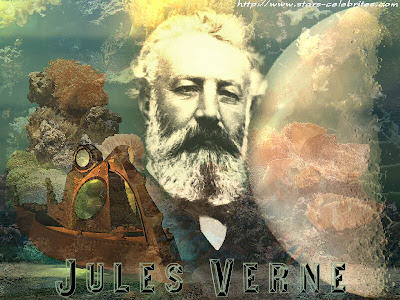 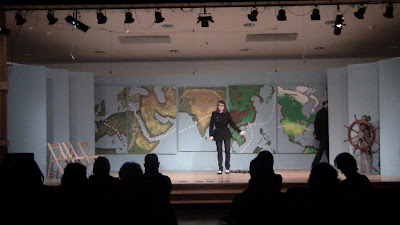 In honor of Jules Verne's birthday, today, February 8, here is a link to a previous post of mine on The Mysterious Island and the imagination of Jules Verne.

Coincidentally, I am directing my Drama Club in a production of Mark Brown's adaptation of Around the World in 80 Days. On Broadway, Mark Brown's production presented six performers playing all of the 32 different parts. I, however, have a cast of 28 playing those parts. I really like the script, the cast members have enjoyed the story's action and comedy, and we have added a number of crowd scenes to establish some of the settings: a London street scene; Suez, with characters speaking real Arabic; and Bombay, with a spilled basket of cobras causing panic amidst a Hindu procession; as well as an attack on the train by a whole passle of Lakota. 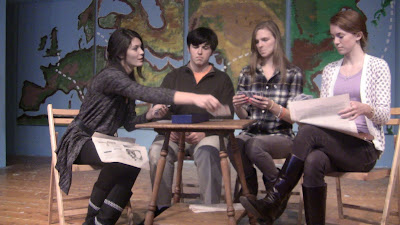 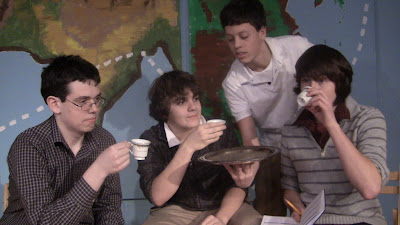 Our performances start on Thursday. Yesterday we had a great rehearsal. (Photos above: backdrop all ready, but no time to put on costumes.) Today, things fell apart; key performers were absent. Our production has been plagued by conflicts for stage time, days of rehearsal lost to snow days and early dismissals due to bad weather, and the very busy, over-scheduled, last-minute nature of the American teenager. One more rehearsal tomorrow, and then we go around the world in 80 days whether we are ready or not. I will keep you posted. 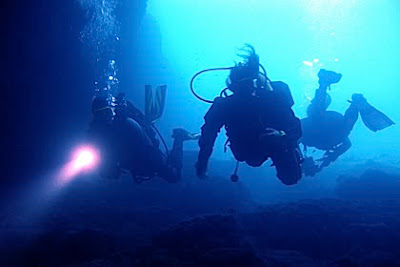 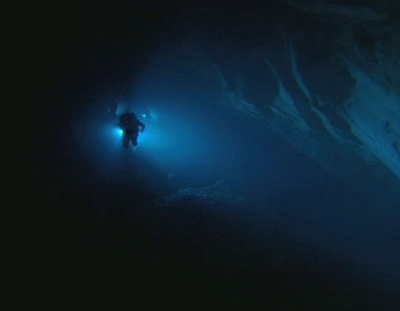 Watching Sanctum I was reminded of a wonderful scene from Journey to the Center of the Earth (1959). In a hot springs grotto, Professor Lindenbrook (James Mason) removes a mineral sample from a cluster of brilliant gems. This releases a raging torrent that threatens to flood the underground chamber. Where do you go when a cavern floods? Similarly, in Sanctum, or James Cameron’s Sanctum (I feel sorry for director Alister Grierson), as we are clearly informed by all previews and posters, a tropical storm in Papua New Guinea begins to flood an underground network of dry caverns where a group of intrepid explorers has been trying to follow an underground river to the sea. Both films are at their best when preliminary preparations for the expeditions are over, and when they are not wasting time with silly frictions between expedition members. When the focus is on gripping adventure and visual dazzle, both films entertain, Journey significantly more because it has James Mason establishing a memorable character.

Sanctum is especially marred by elements that detract from the thrilling adventure and the wow-inducing visuals. There’s too much clunking around of equipment and clacking away at computers, as well as moving around of characters too numerous to keep track of, before the storm hits and the nether regions flood. On top of that, the subterranean action is weighed down by silly friction between hard-driven Frank (Richard Roxburgh), the leader of the expedition, and idealistic son, Josh (Rhys Wakefield), who feels scarred by Dad’s domineering character. In addition, the action is crippled by silly arguments about who’s staying behind or about the decency of using a dead woman’s dry suit. Jesus! In a life-or-death situation, you use the frickin’ dry suit! Then, of course, the resident gung-ho adventurer, Carl (Ioan Gruffudd), turns into a sniveling coward who swims off with the last oxygen tanks and later attacks Frank. Here, Gruffudd’s ravings constitute the worst acting in a film rife with wooden delivery of poorly written lines.

Had the action started earlier, had the story dispensed with 90% of its dialogue and 50% of its characters in order to spend its time on more underwater action and impressive cinematography, this would have been a great adventure movie. As is, Sanctum is intensely gripping here and there and often visually dazzling, due, I must admit as a 3-D Luddite, to some of the best 3-D images I have seen since the resurgence of the 3-D gimmick.

Image: In the very first scene in which two of the cave divers submerge, the camera lens, cut in half by the waterline, draws the surface right into your face, and you feel like you are submerging with the divers, which delivers a split second of panic since you aren’t wearing scuba gear!

Image: The explorers swim out of a claustrophobic tunnel into a vast underwater chamber where they float in watery space like space-walking astronauts, and 3-D brings you right into that weightless world.

Image: When the dry caverns begin to flood, the explorers scale a wall under a fall of water that gushes into your lap.

Here, this use of 3-D is not simply a label slapped on the film to join in on the merry 3-D epidemic. Here 3-D is the film’s major attraction. Films with compelling stories and well-developed characters don’t need 3-D, but this film is all about it and would have been better without the dialogue and silly character conflicts. Go ahead, flood that cavern, but do it way earlier and keep us down there longer in an amazing underwater netherworld.
Posted by Richard Bellamy at 10:37 AM No comments: