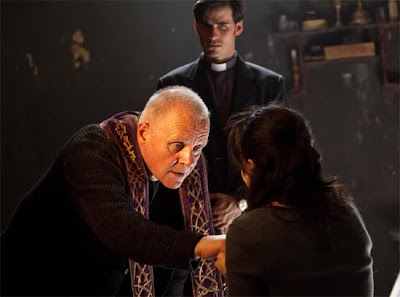 Mikael (1408) Håfström’s The Rite is not an overly scary movie about exorcism, but it is a sincere, modest little movie about faith and God. Colin O’Donoghue plays Michael Kovak, a mortician’s son who enrolls in an exorcism course in Rome so that he might find God through exposure to the devil. Anthony Hopkins plays a very experienced exorcist, a Welshman named Father Lucas Trevant. At first, Hopkins effectively plays Trevant as a quirky, slovenly weirdo, his wrinkled pate covered with bristly gray hair. When Father Trevant’s breakdown as a result of a possessed girl’s death allows him to be occupied by a demon, Hopkins taps into his inner Hannibal Lecter, glaring maniacally as a taunts Kovak with the kind of breathy rhetoric that is a Hopkins forte, ranging between the merely cheeky and the downright shocking.

During the final duel between Kovak and the demon, you might find yourself expecting Hopkins to flick his tongue between his teeth and utter, “Clarice!” Hannibal Lecter was certainly possessed by some demon, and there’s something suitable about Hopkins playing a possessed exorcist, so you can’t help but chuckle inside. Admiring Hopkins as an actor and enjoying his histrionics, you might chuckle aloud. The fellow behind me, one of a guys’-night-out group I have seen at the mall multiplex on a number of Friday nights, chuckled just about every time Hopkins opened his mouth. Either Hopkins tickled his fancy or he found the film ludicrous (which means he wasn’t Catholic). If the former was the case, I wish he’d restrain his tickled fancy and keep it to himself; if the latter case, the film didn’t quite deserve his response. Despite Hopkins’s hyperbolic Lecterizing, The Rite is an atmospheric, genuinely sincere examination of a young deacon’s conflict with his lack of faith, and his skepticism in regards to God and the existence of the devil.

The movie starts chillingly enough with close shots of embalming tubes and instruments and a squirm-inducing depiction of apprentice mortician Michael Kovak working on a corpse, stuffing and stitching closed the mouth, washing the hair, and preparing to slip on the dead girl’s underwear. In fact, the film’s scariest scenes take place at Michael’s childhood home where a nearly unrecognizable Rutger Hauer, as Michael’s father, works on bodies, filing or painting fingernails with the meticulous care of an artist. At one point, we flash back to young Michael looking down the long dark corridor of memory to the embalming room where his father works on the boy’s dead mother and invites him in to watch. We’ve seen this kind of thing before, but there’s something reliably creepy about scenes in embalming rooms, which is not always the case about scenes involving demons uttering deep-voiced obscenities from a poor girl’s body. 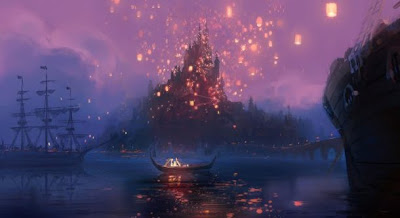 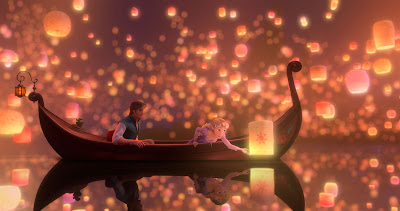 Considering a film’s capacity to depict any conceivable image, you’d think every film would take the time to present something memorable. Even silent films could stage a chariot race, depict ancient Babylon, or part the Red Sea. Nowadays, it can all be done on a computer. All it takes is imagination, and it’s a sad thing when imagination is lacking in a large number of films throughout the year. It’s something to celebrate when imagination has been effectively employed.

In Tangled (I want to say Rapunzel because I think Tangled is a bad title), Disney’s secondary feature of the year, imagination is certainly not lacking, and this little movie entertains, touches your heart, and fills your eyes. To its advantage, the story is kept elemental. Rapunzel’s hair is endowed with healing powers, and evil Mother Gothel (Donna Murphy) steals Rapunzel at infancy from her King and Queen parents and sequesters her in a tall tower in a hidden canyon so that she can enjoy Rapunzel’s hairy Fountain of Youth all by herself. Meanwhile, the bereaved King and Queen commemorate their child’s disappearance by launching a floating lantern that symbolizes their undying hope in her return; this ceremony has grown over the years into a dazzling spectacle involving everyone in the kingdom.

Mother Gothel is a nightmare version of the overbearing, overprotective mother. As an animated character, she’s just as chilling as Erica Sayers (Barbara Hershey) in Black Swan. Even though Rapunzel’s hair keeps Momma G. from aging, the old witch’s eyes are dark and fierce, and her hair looks like a cast-iron version of Elsa Lanchester’s hairdo in Bride of Frankenstein. While her fearsome head of hair stands out in scary contrast to Rapunzel's long, silky strands, Mother sings that “mother knows best,” and her threat that Rapunzel will never see the outside world is a shocker that starts the girl to rebel. 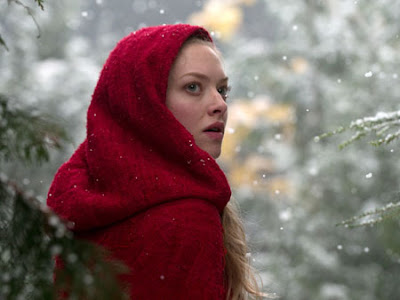 I saw 68 movies in theaters in 2010 and the movie year is over! Over! It was fun! And what doubled the fun was writing posts about what I saw, reading reviews on other blogs, and receiving comments from a number of faithful bloggers. As I move into my third year of blogging at Little Worlds, I want to celebrate all the great writing and stimulating discussion out there that makes each film year so exciting. We have the new year of movies ahead of us, but I'm still feeling out of sorts.

I have seen every movie worth seeing at the multi-plex, and some of them I've seen multiple times. Steadily since January 2010, I have gone to the movies at least once a week, usually on Friday night, and some weeks I went two or three times. One week it was five times. Now there’s nothing to see!

I’ve seen all that’s new and noteworthy except for Blue Valentine. Living on Cape Cod is a limitation. But most likely I’ll get to see it since Ryan Gosling will be an Oscar nominee for Best Actor, so it’ll play at the Nickelodeon, which I call the Old Moldy, or at the Cape Cinema, which has soiled doilies on the uncomfortable chairs (not seats) and the retirees that frequent the place in great numbers don’t know how to put their cell phones on vibrate. I will see it eventually, but under barbaric conditions. For now, I have to wait.

We are now in the January doldrums and you know you’re desperate when you are torn between seeing Tron: Legacy a third time or Season of the Witch with Nicolas Cage. From what I’ve heard of the latter, I was glad I chose the former, which at least has Quorra (Olivia Wilde). I never considered seeing Little Fockers or Gulliver’s Travels. I have some self-respect.

Yes, I am out of sorts and suffering from the post-partum blues. I’ve reviewed most of the movies I saw in 2010; I wrote a post on the best in Art Direction of 2010; I compiled a post that includes an image from each movie I saw; I finished a report on “My Year at the Movies,” including nominees and winners in major categories, that has been part of an annual real-mail exchange with Jason of the Cooler for the past 14 years, and I’m feeling totally out of sorts.

I’ve watched my Inception DVD five times. I watched my How to Train Your Dragon DVD twice in row, starting it again as soon as the credits had rolled, and I spent some time watching some of my favorites from the past couple of years: Inglourious Basterds and The Curious Case of Benjamin Button. But I’m still out of sorts.

When it comes to the movies, I need something that fills my eyes; I yearn for memorable images. I also need something that engages mind and emotions. It was not a great year for films that met these criteria, but I found a number of satisfying movies that did their job well. When I can look back over the year and remember at least a few memorable images, I feel that it's been worthwhile. In fact, a few great films will go a long way to give me satisfaction in my ongoing quest for unique movie experiences. And schlocky films don't keep me away from the movies. I have to see something.

Here you will find an image from each of the 68 movies I saw at a movie theater - on Cape Cod, in Washington, D.C., and in the San Francisco Bay Area. I include the great, the good, the bad, and the dreadful in the order in which I saw them. As often happens, my favorites lump together toward the end of the year. As far as Google allowed, I tried to find a favorite image from those favorite movies.

For me, images are crucial. Dazzling cinematography, CGI, or art direction can boost my evaluation of a movie despite weaknesses in story, writing, and acting. Tron: Legacy might feature poor acting and silly dialogue, but I found a lot worth looking at. On the other hand, compelling ideas and great performances leave me feeling rather indifferent when the film lacks compelling imagery that fails to transport me.

As you scroll down, try to name all the movies represented. Hopefully you will see images from films that you loved. You will definitely see images from films that you hated; most likely I hated them too. Some of the images might be from movies you have forgotten! Indeed, some of these movies are forgettable. But scrolling below I realize that even though the great films in this collection are few, I had a lot of fun at the movies this year.