The Tragedy of Fruitvale Station 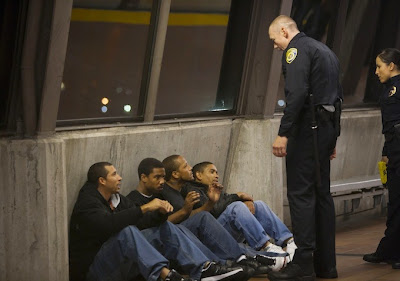 As a film about the controversial shooting death of Oscar Grant (played by Michael B. Jordan) at the Fruitvale BART station on New Year's Day, 2009, and as a vivid portrait of a 22-year-old African American ex-con struggling to get a job so that he can marry his girlfriend (wonderfully portrayed by Melanie Diaz) and care for his daughter, Tatiana (touchingly performed by Ariana Neal), Ryan Coogler's Fruitvale Station is piercing in its presentation of a family living amidst the mean streets of Hayward and devastating in its presentation of the tragic event. Central to the film is the relationship between Oscar and his daughter - and the tragedy here is that he wants so much to be her responsible father and makes moves to turn over a new leaf, only to be killed when he's out having fun with his girlfriend and their friends. With excellent performances across the board, and a very earnest performance by Octavia Spencer as Oscar's mother, this film is easily one of the best films of the year for its taut direction, its honest writing, and the very memorable performance of Jordan as Oscar, a young man whose good intentions and his joyful love for his daughter are brought to a sudden end by a single accidental bullet.
Posted by Richard Bellamy at 11:10 PM No comments:

The Way, Way Back 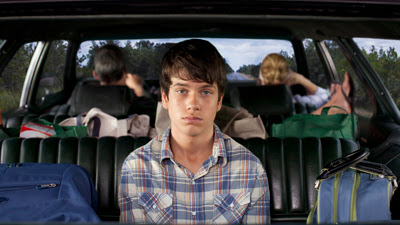 First of all, what do you call an indie – you know, the thoughtful, supposedly well-written, character-driven film that plays at the Landmark chain, not at your local multi-plex? I want a label for that kind of film, but some film writers object to the term “indie” because it’s not precisely true that all these films are “independent.” So, give me a label!

That said, the recent The Way, Way Back, directed by Nat Faxon and Jim Rash, is “that kind of film:” modestly budgeted, thoughtfully written, character-driven. In this one, Liam James plays Duncan, a troubled young teen struggling to come out of his shell. All the ingredients are here – his divorced mother, played by Toni Collette, has taken up with a self-centered jerk named Trent (Steve Carell) whose stringent approach is not so good for Duncan’s self-confidence. Stuck at Trent’s beach house somewhere on the Massachusetts coast, Duncan meets neighbor Betty (Alison Janney), a joyful alcoholic, and her teenage daughter, Susanna (AnnaSophia Robb) with whom Duncan makes monosyllabic attempts to communicate. And where does Duncan learn to come out of his shell? Oddly enough, at the local water park, Water Wizz, where Owen (Sam Rockwell), the wastrel owner who lives in a small apartment on the premises, teaches Duncan about life and humor and standing up for oneself.

Throughout the course of this mostly enjoyable film, we get the expected development, setbacks, and triumphs. Duncan learns a sense of humor, gains courage, and kisses the girl - or tries to, at least. Trent is not the best match for Duncan's mother, and though she is afraid to strike out on her own, she learns the importance of getting to know her son before it's too late. Meanwhile, Betty goes on being a joyful alcoholic. Janney's performance will most likely earn an Oscar nomination; Carell, Collette, and Rockwell have garnered Oscar buzz as well.

The film holds touching moments of realism; other moments fall flat or don't ring true. But the depiction of Water Wizz and its employees is spot on! I know this from experience because I've taken my kids to this water park in Wareham, Massachusetts, which is not far over the Bourne Bridge from Cape Cod, and I can say that he film effectively captures Water Wizz in all its brightness and good times on the surface as well as its sad shabbiness under the surface. Rockwell is perfect as the aimless, good-for-nothing owner who ironically teaches Duncan how to live life, and Maya Rudolph is superb as Caitlin, the overworked gal who really runs the show and would like something more out of life than Water Wizz. Caitlin, Owen: I've met people like this servicing the summer fun on Cape Cod. Trent, Colette, Betty: I've seen them too, renting beach houses in Centerville.

The Way, Way Back pins the locations and the characters right on, but the writing and the development of Duncan's character don't always ring true.
Posted by Richard Bellamy at 9:05 PM No comments: 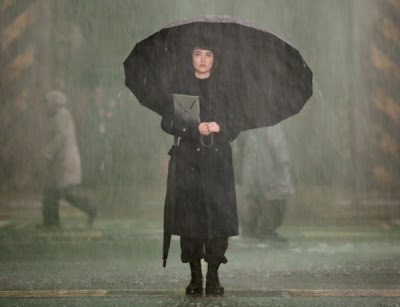 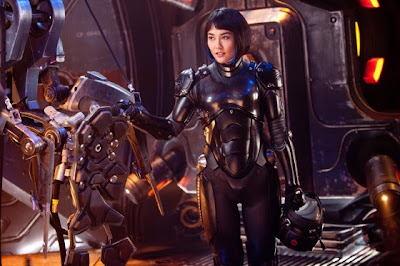 Indeed, Pacific Rim is a very noisy movie in which very noisy super-sized mecha units called “Jaegers” battle very noisy super-sized alien monsters called “Kaiju” that rise up from another dimension through a crack in the Pacific Rim to eradicate humanity! That means humanity must go mano a mano with the big beasts in very noisy combat – not that these 2020-something humans don’t have fighter jets that could fly circles around the lumbering Kaiju and pierce them with multiple ballistic missiles. The whole movie could have been about how they invent different types of missiles to shred and decapitate and blow the monsters to smithereens.

But with the premise as it is, what we get is a very noisy but highly entertaining movie about huge Transformers-like machines driven by pairs of human pilots engaged in colossal, substantially rendered CGI combat reminiscent of the city-stomping battles between Godzilla and Mothra, Rodan, Ghidorah, Mechagodzilla, and many more. In fact, the variety of Godzilla's foes seems to inspire the variety of Kaiju that adds additional fun to the look of the film.

Pacific Rim is well made from beginning to end. It gets started quickly with newscast history of the advent of the Kaiju and the history of the deployment of the Jaegers in the Kaiju Wars. It is full of dark CGI vistas of beleaguered cities all over the world. Charlie Hunnam is more than serviceable as hot-shot pilot Raleigh Becket. Idris Elba brings solid presence to the screen as Stacker Pentecost, the commander of the Jaeger unit, and Burn Gorman and Charlie Day take their portrayals of mad scientists comically over the top. I could have done without the silly bits involving Ron Perlman (my God, sci-fi groupies love him!) as a marketeer dealing in Kaiju organs and bones.

But the best thing about Pacific Rim is the character of Mako Mori, sensitively portrayed by Rinko Kikuchi (Babel). Like a kickass anime character, Mako Mori is cute but formidable. When we first meet Mako, she is the commander's mild-mannered assistant, standing in the rain with an umbrella, waiting for the arrival of the new pilot, Raleigh. Ultimately, she is chosen as Raleigh's partner. During a training session crisis she flashes back to an episode when she is a little girl (played poignantly by Mana Ashida), the sole survivor of a ruined city running from a gargantuan monster, and her remembered fear almost maker her blow up the command center by mistake. Later, Mako becomes a competent pilot and a fierce Kaiju fighter. But the best thing about her character development is the visually stunning flashback episode, the film's most memorable scene, in which the little girl in the red coat and red shoes runs for her life from the Kaiju, and little Mana Ashida is tremendous in the one-scene part, a scene that establishes a touching relationship between Mako and Pentecost.

The film's resolution might seem a little too easy considering how difficult it is for a Jaeger to take down a single monster in the beginning of the film, and it's all kind of predictable, but the world created by this film's memorable art direction, the gripping action, and the character of Mako Mori make this movie a summer eardrum-splitter you won't want to miss.

Posted by Richard Bellamy at 3:42 PM No comments: 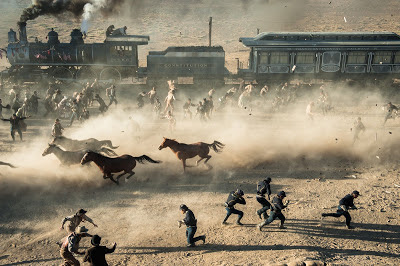 If you like Westerns, you can’t help but like at least the first third of Disney/Bruckheimer’s The Lone Ranger, directed by Gore Verbinski. The splendid location shots of Monument Valley are a joy to behold. You can easily pick out backgrounds used in The Searchers. The film starts with a train coming into town, carrying Butch Cavendish (William Fitchner), a very bad bad guy who has a hankering for human flesh. The Texas Rangers, led by Dan Reid (James Badge Dale), are there to conduct Cavendish to justice, but a bunch of bad guys are there to help him break out. The entertaining opening sequence involves an escape, a pursuit, and a train wreck with Johnny Depp as Tonto and Armie Hammer as the the Lone Ranger-to-be trying to escape the speeding train chained together, employing routines reminiscent of the antics of Chaplin and Keaton.

Throughout the first third of the film, I enjoyed the allusions to The Man Who Shot Liberty Valance, High Noon, and Spaghetti Westerns in general. The opening train wreck sequence involves members of a temperance league singing “Shall We Gather at the River” as the bad guys start shooting – a nice reference to The Wild Bunch. In addition, long shots like the one above provide the kind of detailed, panoramic action we expect from Westerns.

So, yes, I really enjoyed The Lone Ranger. The middle third of the film wanders, sags, and slows down. I could have done without the whole sequence involving Helena Bonham Carter, looking like she didn't bother changing costumes and makeup coming off the set of Les Misérables, here as a whorehouse madam (big surprise!) with an ivory leg. But this middle third of the film includes my favorite sequence, evoking many a Western in which Indians attack the vulnerable homestead. Here it starts as Rebecca Reid (Ruth Wilson) notices threatening signs: a single Indian on the top of a ridge, birds flying up from the brush into an ominous twilight sky.

After its disjointed middle, the film redeems itself with a spectacular climactic sequence involving the William Tell Overture, two runaway trains, and many clever stunts taking place on the two trains as the Lone Ranger and Tonto fight the bad guys and rescue Rebecca and her son. I love Tonto’s ladder trick. Throughout the film, Johnny Depp is odd and taciturn as only Depp can be, and he made me laugh a number of times.

Unlike Man of Steel or Iron Man 3, The Lone Ranger is a summer blockbuster I would gladly see again. Critics don’t seem to like The Lone Ranger, but I hope it does well at the box office. I’d hate for it to spell yet another end to my favorite genre.

Early in the movie, Dan Reid and his Texas Ranger posse stop on a ridge overlooking a wide valley between red rock cliffs. Greenhorn John Reid wonders what the delay is. Dan explains that they fear an ambush because the canyon is open and affords little cover (even though, when the ambush occurs, there seems to be plenty of cover). There is the wide, long shot of the colorful canyon. There is the fear of ambush that you know this widescreen canyon holds. It is a classic Western moment.

Posted by Richard Bellamy at 12:32 AM No comments: