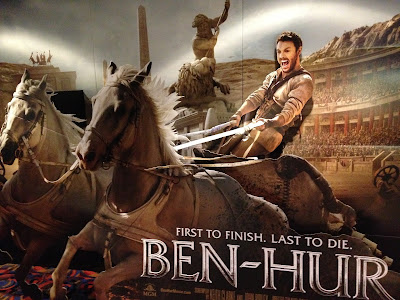 I would confidently wager money that the new Ben-Hur contains a greater percentage of dialogue for its little-over-an-hour running time than the 1959er has for its plus-three-hour length. That is one of this film's many downfalls. All that talk slows down the action as the film spends more time telling than showing. Hell, even Jesus talks, whereas, in the William Wyler film Jesus says nothing, we never see his face, and the result is more mystery. On top of that, the film opens with one of the worst usages of voiceover narration I've experienced in a long time as Morgan Freeman explains things about the Roman Empire that most viewers could intuit as well as backstory about the relationship between Ben-Hur and his Roman friend, Messala, that the film should be showing us through action.

I enjoyed the new film's authentic locations and some of its reinventions. For the most part, however, the twists, indeed, the contortions, made to the classic plot line, steered by Christian producers going for a one hundred percent feel-good story, rob the film of drama and any sort of visceral seriousness.

The tile does not fall - an element that is integral and thematic to the story. The arriving governor is not injured. B-H is not condemned for a fateful accident!

Messala is a conflicted character who feels forced to condemn B-H. He is not the wonderfully corrupted Messala played by Stephen Boyd.

Quintus Arrius harangues the rowers and dies in the battle. B-H does not save him so that Quintus can adopt him, get him pardoned, and make him a wealthy man of power who is posed to seek his vengeance Count of Monte Cristo-style.

The leper story is not developed. We just learn that mother and daughter are incarcerated somewhere - looks like they have been lying on a cot for seven years - and it's not clear what disease they have. Very rapidly and without any drama, they are cured by a trickle of rainwater coming through the roof and the Sheik (Freeman) buys their freedom. "I'll take them."

Jesus talks and appears more - but his death is less visceral.

Interesting, the film includes a scene in the garden where Jesus is betrayed - and this is in the novel - but B-H is not present, running from the Romans, as he does in the novel.

And, most disappointingly, B-H and M forgive each other, and M does not die - though he loses a leg. It's all a big happy, hugging family at the end, traveling along with Freeman's caravan. And M rides off into the sunset with B-H - and what's this? Indeed, M has grown a new leg. Miracle!


Posted by Richard Bellamy at 2:25 PM No comments: