Remember Me - But not that way! 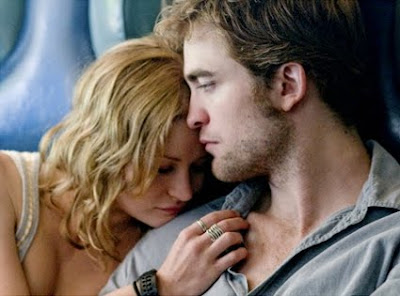 It’s really too bad that Salinger wouldn’t sell the film rights for The Catcher in the Rye. If he had, Robert Pattinson could play Holden Caulfield and most likely earn an Oscar nomination for Best Actor. Coming from two Twilight movies, Pattinson has certainly perfected the Holden Caulfield-as-played-by-James Dean act. It’s all there – the downcast, pain-filled eyes, the unshaven cheeks, the neck and head sticking out perpendicularly from the rest of his slouched body clad in rumpled clothing.

Without Salinger’s novel as an option, Pattinson can at least explore his inner Holden in films that borrow from the classic story. In Remember Me Pattinson plays Tyler Hawkins, wastrel son of a Wall Street wheeler-dealer (Pierce Brosnan) who is estranged from his son and little daughter after the suicide of his elder son, Michael. Auditing courses at NYU and leading a shiftless existence out of a grungy Manhattan apartment, Tyler feels loads of pain – just like Holden Caulfield, and, just like Holden, he smokes a lot, hangs out in Central Park with his little sister, and is fixated on the memory of his deceased brother. Tyler spends a lot of time “writing” to his dead brother in the coffee shop where he last saw him alive. At the same time, Tyler may be shiftless, but he is devoted to his little sister, a talented artist, ignored by her father.

Although aimless and depressed, Tyler is luckier than Holden. He falls in love with Ally Craig (Emilie de Ravin), a young woman also suffering from pain. When she was eleven, she witnessed the shooting death of her mother in a Brooklyn subway station. Conflict arises here when it turns out Ally’s father, a tough Brooklyn cop tormented by his wife’s death, arrested Tyler one night. Ally feels lied to and Daddy wants to kill the good-for-nothing, but true love shines through, and Tyler and Craig are destined for each other.

Their relationship touchingly portrayed, Tyler and Ally both suffer from life’s unfairness. Ally’s mother was shot by a mugger. Tyler lost his brother to suicide, and he spends his life lashing out at those injustices in life noboby can stop: macho punks beating up innocent guys; school girls ostracizing his sister; his father’s neglect. But Tyler keeps trying in his own sometimes self-destructive way, and that gives Pattinson’s character something to admire, saving him from being just a handsome, moping, self-absorbed wastrel with bedroom eyes, even though once in a while you feel like shouting, “Stand up straight and get a life, why don’t you!”

But Tyler’s and Ally’s dedication to helping each other through life’s pain wins through. A mother or a brother can matter so much that it may well be unreasonable to expect anyone to get over the senseless loss of such a loved one – though in the end Tyler and Ally learn that they can “remember” without feeling all that debilitating pain.

On second thought, perhaps we should thank our lucky stars that Salinger withheld his film rights. Pattinson as Holden Caulfield might be too much to bear. He’s too good at that woe-is-me routine. Better to play Holden-like characters in movies like Remember Me which give him a chance to take action and rise out of that morose Holden mode that can get kind of tiresome.

For its Catcher parallels, the performances of Pattinson and de Ravin, its touching and contemplative musical score, and even for its melodramatic ending, I enjoyed this little film.

Posted by Richard Bellamy at 5:03 PM