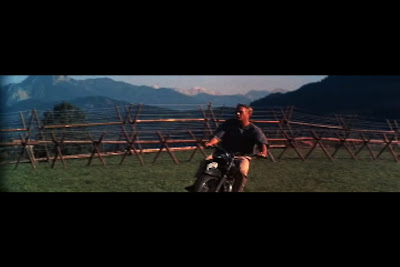 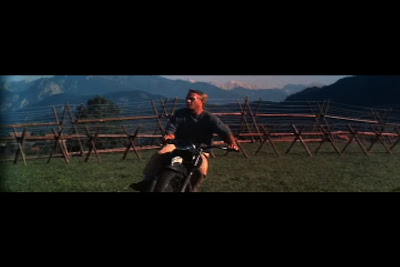 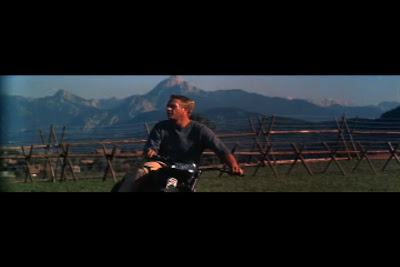 (The Steve McQueen Blogathon continues at Jason Bellamy's The Cooler.)

This is the power of cinema:

I was 11 years old, living in San Mateo, California, in a suburban home that had a small backyard with a lawn and a wooden shack used as a garden shed. The shack had a door, windows with glass, and a concrete floor with a hole in it. My two brothers and I, along with a couple of neighbor kids, pulled away more pieces of concrete and started digging straight down. Then we tunneled out under the foundation and the front wall. Surreptitiously, we dispersed the dirt in the backyard garden beds, sometimes holding handfuls in our hands, walking through the garden, and dropping them as we walked. A neighbor friend made a wooden tray that we filled with dirt and placed over the mouth of the tunnel to conceal it. Our secrecy fooled the German “guard” who sometimes looked over us from the kitchen window over the sink. (Well, she was my mother – but she really was German.) The concealing dirt tray hid the tunnel successfully on Saturday when my father entered the shack for a shovel or hoe. When the tunnel was done – it was no longer than half the length of an eleven-year-old’s body – we breached the surface of the garden bed outside the shack and finally revealed our secret to the “Germans.” Tunnel done, we went on to stage motorcycle chases on our bicycles. We didn't get in trouble for the tunnel. We only got in trouble for tying a string across the street and nearly giving an old lady a heart attack. All this - because of a movie.

It was 1963. I was 11, in the 6th grade that fall, and with movies like Ben-Hur, Lawrence of Arabia, and To Kill a Mockingbird as some of my early cinematic experiences, I was already, irretrievably, a passionate movie nut. I boned up on older movies by scouring T.V. Guide for classics playing on television, and compared notes with my avid moviegoer mother who had seen them all. My father and older brother were more into sports, but they went along with most of the family expeditions to the movies – and dinnertime conversation often involved one of my two brothers or me recounting the plot of a movie we had seen on our own. That year, my older brother had gone to a newly released movie with some friends, and one dinnertime, he excitedly reported the basic plot of this great movie: The Great Escape. We had to see it!

We went as a family to the Belmont Theater in Belmont, California. My parents were very invested in the viewing. My native British father had been in the R.A.F. during World War II – fortunately not flying a Spitfire in the Battle of Britain – spending most of his time organizing physical training for soldiers in India. My native German mother had immigrated to Canada in the 1920s, and we had moved to California when I was two, but most of her relatives endured World War II in Germany. One of her uncles was wounded at Stalingrad but escaped internment in a gulag. Nevertheless, watching the film she had much sympathy for the young British officers who had flown into harm’s way and ended up in a German prison camp. (Her father had been incarcerated in an internment camp in Canada during the war.)

You follow the trucks winding through green German farmland to the accompaniment of Elmer Bernstein’s highly hummable march, and the film immediately takes you into its little world. The German prison camp where the irrepressible British flyers plot their Great Escape is an unforgettable microcosm filled with a variety of interesting characters engaged in gripping schemes. It’s just kids playing imaginary games in the backyard – fooling the “goons” with clever warning systems, inventing ingenious contraptions with scrounged materials, digging elaborate tunnels – and keeping it all secret from the Germans.

But it’s not only the suspense that builds as the escape tunnel is being dug, it’s the variety of likable characters that hooks you as well. My brothers and I picked our favorites: the tortured “Big X” Roger Bartlett (Richard Attenborough), obsessed with escape; the claustrophobic “Tunnel King” Danny (Charles Bronson); the clever “Manufacturer” Sedgwick (James Coburn with a dreadful Aussie accent), escaping with a big trunk; the charmingly devious “Scrounger” Hendley (James Garner); the tea-loving Blythe (Donald Pleasance), the bird-watcher turned forger; or the upper-class Ashley-Pitt (David McCallum), dispersing soil down his baggy trousers, sacrificing himself to save Roger from the Gestapo. And breezing through it all – Steve McQueen as “The Cooler King” Captain Virgil Hilts – bouncing his baseball in solitary confinement, making hooch out of potatoes to cheer up the Brits on July 4th (as if the Brits didn’t know how to have fun and had to be introduced to hard liquor!), digging his way under the wire like a mole, stealing a motorcycle and speeding toward freedom in Switzerland.

I was captivated by this movie, and so was the large audience at the Belmont. And even without a motorcycle chase, there is enough to grip you. The series of escape and capture sequences is a masterpiece of parallel editing: the pursuit of Bartlett and MacDonald has always been one of my favorite running chases; and Ashley-Pitt's sacrifice at the train station is a wonderful example of the drama of looking. But then there is the motorcycle chase – so engaging because that’s Steve McQueen there on the motorcycle – for the most of the shots – and the whole sequence is enhanced by the ironic beauty of the green countryside and the quaint Bavarian villages.

You know those moments in the history of film that elicit an audible response from the audience – the kind of moment that makes you blurt out an “Oh, yes!” Of all moments like this, I don’t remember a more enthusiastic one as when, during my first viewing of The Great Escape, Hilts heads for the wire and jumps it. Your heart pounded. It looked like he was going to make it! Nowadays, vehicular jumps elicit yawns. But this jump was a judiciously employed surprise, set in a stunning location, moved along by a thrilling musical score, involving a likable hero played by a charismatic actor, and all these ingredients made the whole thing magically exciting.


Posted by Richard Bellamy at 6:30 AM

Did the old lady survive? Your discussion of aristocratic Ashley-Pitt's behavior reminds me of Captain De Boeldieu's similar sacrifice in Grand Illusion. I wonder how much John Sturges lifted from Renoir's film. They seem related just like The Magnificent Seven (also directed by Sturges) Americanizes The Seven Samurai.

Hokahey! This is tremendous! Thanks for contributing such a warm personal story -- about a movie and the love of movies! This is terrific, as evidenced by my inability to use anything other then exclamation points! Here's one more!

Jason - Thanks for the exclamation marks! Much appreciated.

FilmDr - I'm so happy you're back from your trip. I tried to access your account of your trip to Dublin but it wouldn't come up. Now I see it does and I'm looking forward to reading it.

Yes, could well be an allusion to Illusion. Second to the motorcycle chase scene, the Ashley-Pitt scene is a favorite. I love how he risks hanging around to watch to see if Roger and Mac get through the checkpoint. The pistol turned on the Gestapo guy's leather coat is one of my favorite frames in the film - and for those days, the smoking bullet hole was quite shocking.

The old lady stopped her car. We, of course, had been watching from hiding. We ran for our lives as she got out of the car and a busy-body neighbor came over to her and consoled her. He gathered up the string and brought to my house - of course, and tattled to my mother. We hid in the very small crawlspace between the wooden shed and the bordering fence that was overgrown with ivy. Can't remember the punishment - maybe my mother didn't quite believe our loopy neighbor. Also, she loved the movie that she knew we were emulating. The old lady lived to drive badly again.

I loved reading this - excellent exposition, Hokahey. I think I was maybe 12 or 13 when I first saw this movie and had much of the same excitement as you, though I didn't actually take to the backyard. It was kind of one of those movies that none of my friends would have watched (you know, it being "old"), so I had to wait until years later to tell them that it was great.

Sadly, I haven't seen this in years and my memory is colored primarily by this exact scene. It's sad because as you describe and as I vaguely remember, there is so much more that makes this movie a classic.

Thanks for the comment, Daniel. It's great to have a movie experience like this when you're young. I feel sorry for kids these days because, in my prejudiced opinion, they don't have the same wondrous movies to get excited about. Perhaps for that age nowadays something like Avatar fits the bill - but something like that just doesn't hold the same magic.

Wonderful piece, Hokahey, one of your very best. You make it vividly clear how The Great Escape was such a Zeitgeist movie then, and how well it holds up even today.

Craig - Thanks for the appreciation. I'm glad I had that movie experience. Wish there were more like that today.