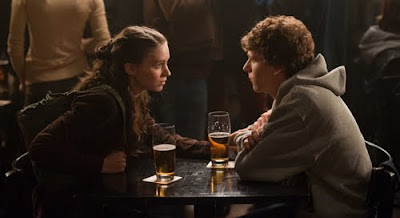 David Fincher’s The Social Network starts out with a lot of words. In rapid-fire run-on sentences that fill most of the lengthy opening scene, Harvard student Mark Zuckerberg (Jesse Eisenberg) talks his way into a break-up with girlfriend Erica Albright (Mara Rooney) … and talks and talks, revealing himself as tactless and insensitive and spurring him on to the blog tirade that leads him to the invention of a who’s-the-hotter-coed website that reels in thousands of visitors and burns out Harvard’s network - that leads him to meeting the preppie Winklevoss twins (Armie Hammer/ Josh Pence) with their idea for an exclusive Harvard student site - that leads him to the invention of Facebook - that leads to alienating himself from financial backer and best friend Eduardo Saverin (Andrew Garfield) - that leads to two lawsuits seeking a share of the bountiful profits gleaned by this facelift of the Internet social scene.

In this cause and effect chain of events, Fincher moves the action along expeditiously but I never felt a gripping sense of witnessing a clever invention that gave birth to an Internet revolution. Zuckerberg gets an idea. He runs across the campus. He modifies the site to include relationship status. Meanwhile, the ongoing rising toll of subscribers is supposed to generate suspense, but that's as gripping as watching the growing prize total of a state lottery for which you haven’t bought a ticket. “Refresh,” says promoter Sean Parker (Justin Timberlake) when the running total of subscribers nears a million in the oh-so-cool offices of Facebook. Don’t hackers know when to hit “refresh”?

The Social Network is about motives. Saverin clearly wants the money he deserves after being betrayed by his best friend. The Winklevoss twins want to assuage the bitterness they feel from missing out on an invention they think was their idea. They don’t like coming in second, which is clearly shown in the flashy, noisily staged scene in which the talented rowers come in a close second at the Henley-on-Thames Regatta. As for Zuckerberg, as he slouches and doodles and jokes sardonically throughout two different lawsuits, it’s clear that his motive has never been money. His motive has been doing what he knows how to do best, and doing it better than anyone else.

As Zuckerberg, Eisenberg works hard to inhabit a challenging role though sometimes his lines come off as merely recited and not coming from a fully realized character. At other times, Zuckerberg as a character shines through the performance. We see him as an isolated, inward outsider, so out of it in his relations with other human beings that if he tosses a girl a bottle of beer and she drops it, as happens in one scene, he's too socially obtuse to draw the conclusion that he shouldn't toss the second bottle. For the most part, I was too aware of a performance that was not consistently convincing. If Zuckerberg feels pain way down there in the cell that he inhabits, Eisenberg rarely made me feel it. And if he's an excessively grasping entrepreneur, he comes off as a limp-wristed grasper.

Throughout, The Social Network is certainly interesting. It is intriguing to observe the irony of an insular loner who creates a website so that millions of people can stay constantly in touch with their friends. I started my Facebook page to share photos and videos with family and peers. It quickly proved useless for that purpose because most people my age were too busy or disinterested to check it. But when I accepted friend requests from former students who had just graduated from high school, I got numerous messages from them when they went off to college and lots of comments on the photos and videos I had posted. When I found a number of messages posted on my birthday, I got to like Facebook. Facebook was invented for college students. They’re the ones who spend time on it – a lot more time on it than I would think they’d have at college. Why they use it, what they get from it, are fascinating questions I wish the film had explored - or had been explored by a documentary which might have delivered a more compelling depiction of this topic. The scene in which Zuckerberg goes on Facebook and hesitantly friends ex-girlfriend, Erica Albright reflects the irony of the anti-social Zuckerberg and Facebook, the social network. It's a dramatic moment, but there isn't enough of that.

The film is cleverly written by Aaron Sorkin, but for all that talking, there's not much drama. It is skillfully directed by David Fincher. I like his use of color: the green appletinis Sean Parker orders when he first meets Zuckerberg and Saverin, the blue lights of the noisy nightclub. (The green appletinis made me think of the blue drinks in a scene in David Fincher's Zodiac - another key meeting staged in a bar over brightly colored drinks.) 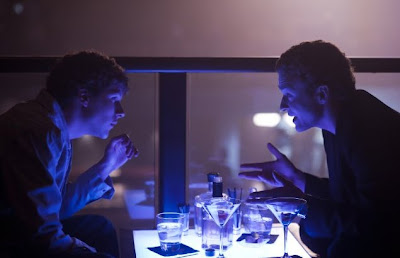 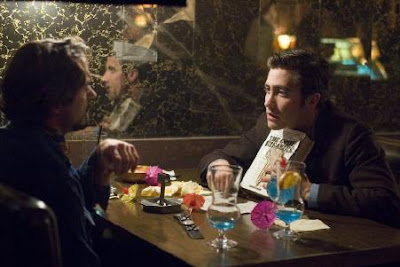 At times, the film gets your attention simply because it's about a web phenomenon that is such a part of our culture today. Ten years from now there will be another web phenomenon to depict on film, and The Social Network will be remembered or forgotten for the quality of its filmmaking and the depiction of its central character rather than for its topic - if its filmmaking and central character are memorable enough. For me, it's nearly forgotten already. Eisenberg's protrayal of Zuckerberg and Fincher's depiction of a revolutionary invention simply aren't compelling enough for me to hit "Like."
Posted by Richard Bellamy at 8:55 PM

It appears that all of our circle of film bloggers considered The Social Network all at once.

Nice review, although I enjoyed the movie much more than you apparently did. The headlong momentum and intelligence of the film kept me enthralled throughout. Maybe I identified more with Zuckerberg and his Machiavellian maneuvers.

You also reminded me that I need to see Zodiac. Do you recommend it?

Thanks - I acknowledge the film's intelligence but I just didn't feel the "headlong momentum" that you felt.

Now, Zodiac is compelling from start to finish - but then it has a much more serious topic going for it. Yes, I definitely recommend it.

I guess we all hit on this movie at once because it's Fincher and it's topical and there hasn't been that much to write about.

But I also took time this weekend to see the kind of junk you and I like to check out. I saw Case 39. Actually, I had gone to see Let Me In but the theater had some "spill" in it that made them cancel the showing, so they let me see whatever I wanted for free. Despite some bad Zellewegger moments, Case 39 had some decent scares and suspense.

I thought it was pretty compelling, not as much as Zodiac, but still quite creatively done.

Everyone's been writing about it lately, haven't they? One of the few movies I don't get sick of reading reviews of, but still.

Really well-written review, Hokahey. For the most part, you've described the film that I saw, even though we had different reactions to it. (I liked it quite a bit, though I'd place it well short of Zodiac, just as a frame of reference.)

A few places I disagree ...

* I think The Social Network is a good film now because of the way it was made, and not its subject. (Of course I acknowledge that some will be drawn by the subject, too.) So I think this movie is going to age quite well. Like Zodiac, it captures its era.

* The millionth-user scene is intended to be anticlimactic. Earlier in the movie, when Zuckerberg gets excited about the spread of Facebook, it's because his company is walking that tightrope between fad and long-term success. By the time the millionth user comes along, Facebook is an established, big-money corporation. There's nothing to prove anymore, not in terms of the number of users, at least. And so Zuckerberg lets the moment come and go, and avoids the after-party, because the moment is empty for him.

* Anyway, I like your observations on color and I respect that this film didn't grab you. It would of course be interesting to see how Facebook impacts lives, and actually there's another movie out right now that does that... review to come later this week.

Yes, Simon, we are busy with the buzz on The Social Network. It's the It thing this week. Also, it's an interesting movie to talk about. Again, I found it interesting; it just didn't engage me wholly - whereas, Fincher's other movies do. I kind of feel like the president of Harvard in the scene in which he basically tells the twins it's a trivial thing. Similarly, I didn't feel the seriousness of this portrayal of Facebook's inception.

Jason - Thanks for your thoughtful comments, and I see how this movie is not meant to be the movie about how Facebook impacts lives. Perhaps there is more drama in that story. Still, for this movie, I feel it had trouble making drama out of its story and its central character.

So, here I am again praising the filmmaking while the film didn't leave me full of enthusiastic thoughts about the enigmas here.

I enjoyed reading your take, Hokahey; I liked the film more than you but my enthusiasm may in part be a generational thing - the "gripping sense" I got was in part because I remember that era on the Internet from roughly the same perspective - I was a college student in 2004 and (realizing to my surprise, seeing the movie) apparently I joined up about three months after the site humbly kicked off from Zuckerberg's dorm room.

I agree that it is pretty limited in its focus; good because it means Fincher doesn't get distracted by desperate attempts to ride the "Person of the Year: You" wave, which could make the film seem dated very quickly - on the other hand, the narrow focus on start-up procedural, business drama, and conflicts of law means the movie assigns itself a bit of an also-ran to the phenomenon itself. This isn't the 60s when a vital cinema can not just reflect and examine social trends, but be a vital part of them; films like The Social Network suggest that movies in the 21st Century are bound to play catch up with newer, fresher media and will always stand apart from them. (I don't think this need be the case, but it's telling that I'm relieved Social Network didn't try to prove otherwise). All a bit knotty, hopefully I conveyed what I mean; I'm planning to put up a review on Monday and perhaps I'll delve into the idea more there.

Anyway, I thought Eisenberg was great, fully shedding his "lesser Cera" reputation (if anything, his performance here makes Cera seem like a broadly-drawn cartoon in comparison). But you've made me question that view a bit - it's true that his performance is almost entirely a surface one. In the end, I agree with Jason that this is appropriate for the part as written.

MovieMan - Thanks very much for the thoughtful comment. I can see how this movie would seem more compelling to you since you were in college during the birth of Facebook. I still felt that thrill a little bit - being a moderate Facebook-user now. It's nice when a film connects with a pivotal point in one's life. 60s movies certainly reflect the turmoil I felt during that decade.

As for Eisenberg, I rated him a big notch above Cera even in Eisenberg's first movies. I actually enjoyed Cera in his most recent movie, but Eisenberg definitely has more range, which he restrained in Social Network - appropriately, but maybe just a little too much.