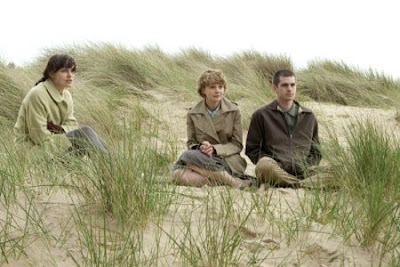 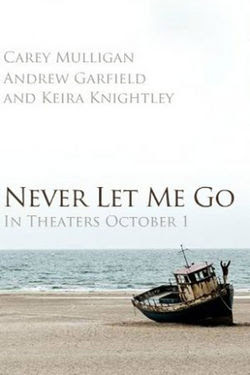 If Never Let Me Go is science fiction, it is that oddly British sort of science-fiction, begun by H.G. Wells, full of anachronistic contrasts, in which chaps fly to the moon or travel through time while other chaps play cricket and drink beer in pubs. Or perhaps it shares more similarities with British dystopian novels such as Nineteen Eighty-Four, Brave New World, A Clockwork Orange, and A Handmaid’s Tale, in which the futuristic setting is merely a platform for the exploration of ideas, and the workings of that world are unimportant or vaguely explained. Whatever the case might be, Never Let Me Go takes science fiction elements, places them in contemporary English settings, most of them pastoral, and uses the incongruities as a backdrop for a touching story of love and identity in the face of a dark destiny.

In Never Let Me Go, directed by Mark Romanek, screenplay by Alex Garland based on the novel by Kazuo Ishiguro, an English boarding school called Hailsham, housed in a sprawling stone manor in the country, controls the upbringing of “orphaned” children chosen for a special function. In the quiet, somewhat slow first third of the movie, young Kathy H. (Izzy Meikle-Small) must suppress her affection for Tommy (Charile Rowe), an awkward, slow-witted lad who’s nevertheless rather cute in a disheveled, baggy-trousers, preppie sort of way. Kathy suffers as she watches her best friend, Ruth (Ella Purnell), win Tommy’s affection before she can.

At Hailsham, Headmistress Miss Emily (Charlotte Rampling) keeps a tight ship. The kids file off to bed with a cup of vitamins and a small bottle of milk, their artwork is examined and collected by Madame (Nathalie Richard), and the children’s favorite occasion involves a pathetic flea market stocked with a “bumper crop” of castoff, broken odds and ends they purchase with buttons and plastic tokens.

When the kids turn young adults, they get shipped off to various “Cottages” where they await their destiny. As luck would have it, Kathy, Tommy, and Ruth end up in the same “Cottage” where Kathy (Carey Mulligan) suffers in proximity with a more mature, physical love developing between Ruth (Keira Knightley) and Tommy (Andrew Garfield). This third of the film introduces turmoil over various rumors about the young people's past that serve to speed up the pace and take us into the more dramatic final third of the story.

I don’t believe it’s much of a spoiler to say that these young people’s destiny is made clear in the film’s powerful opening scene in which the observer, Kathy, begins her narration of past events. Beyond that, anyone who has seen even a modest amount of science fiction can easily guess at the darker dystopian secret.

But this is not just a Masterpiece Theater-like version of an oft-told sci-fi tale. Much more than that, it is a deeply poignant examination of humanity, love, and the definition of the soul that is dramatized by the touching performances of the actors playing the three main characters as children, as well as by Mulligan, Knightley, and Garfield.

After the film arrives at its lyrical but tragic closing scene, wonderfully acted by Mulligan, the story lingers with you as you might wonder about the vaguely suggested logistics of conducting and controlling the industry responsible for this massive horror. The film’s power comes from the dramatic juxtaposition of beautifully captured images of seaside beauty, notably a lone fishing boat resting on a low-tide beach, in contrast with austere interiors, rigidly regimented angles of institutional architecture, and images that reveal the horror. One image involving Keira Knightley is a pulse-pounding shocker. Throughout, the film tells its tragic story with quiet poetry while the touching performances of Garfield, Knightley, and Mulligan ensure that you will not soon forget Tommy, Ruth, and Kathy.
Posted by Richard Bellamy at 5:00 PM

Though I think this film is mostly well done, and that Garfield as Tommy is tremendous, I was disappointed by three things that I've been unable to shake:

1) It felt very much like a book, especially in its strange leaps and the things it included and didn't, so that you could tell that we were getting just enough for some crucial plot point later, but not enough for it to feel like a natural part of the story (think: Kathy flipping through the magazines).

2) The film remains somewhat mysterious about the mission of Hailsham, until all of a sudden we're basically just told in the voice-over -- although still told in a way that makes it obvious while not explicit. Did the film think it was still being mysterious? Why did it bother with the mystery in the first place if there was to be such a boring "reveal" of the truth? I didn't get that.

3) My biggest problem: THE FUCKING TRAILER GAVE IT ALL AWAY. I saw the thing once, and I stopped looking about 10 seconds in. But I HEARD IT. And so (SPOILER WARNING TO ANYONE ELSE), I fucking heard Rampling say that the point was to figure out if they had any souls at all. So there was no suspense whatsoever about what Kathy and Tommy were going to find. This movie led me exactly where the preview said it would lead me, which would be fine if it wasn't so reliant (in my opinion) on the emotional devastation it wants us to feel when Kathy and Tommy are rejected. I don't understand the marketing of this movie one bit.

Jason, thanks for the comment. I know what you mean about it feeling much like a book. In fact, I felt the first third was too much like a slow novel that merely presents vignettes without much tension or conflict.

I'm so glad I didn't see the preview! Also avoided Time Magazine, which reveals the whole thing! I would have been very disappointed - because the reveal comes as a nice shock - a really nice shock that really haunted me, but I still think I would be thinking about this movie even if it had been ruined for me.

Mary and I saw it at the Cape Cinema - mostly attended by retirees. The old couple next to us, the wheezing husband sounding like he could benefit from the service provided in this film in the form of a lung transplant, left saying they didn't understand the movie at all, and so we had to give them a science lesson and explain cloning to them.

As I’ve stated on a previous thread this is clearly a drama with a science-fiction underpinning. It’s brought up as a thematic companion piece to Andrew Nicol’s GATTACA, but even with some striking textual similarities, they stand apart on other counts. This heartbreaking dystopian tale based on a rightly-celebrated novel by Kazuo Ishiguro (who also gifted us with the ravishing THE REMAINS OF THE DAY) chronicles the abuse of the lower classes in a particularly ordered Britain, where rocking the boat is virtually blasphemous. A narcissistic strain basically suffocates creative hankerings and empathy in what is seeminly (at first) an innocuous and pastoral (as you mention yourself) story that segues into something that is far more emotionally complex.

Both Adam Kimmel’s misty and atmospheric cinematography (which appears to suggest a spiritual undercurrent) and one of Rachel Portman’s most piercingly beautiful and elegiac scores serve as invaluable tools for Romaneck to cinematically translate Ishiguro’s shattering vision.


Yeah, there are inexplicable holes in the story, and it’s sometimes a frustrating experience, but in the end it moves on a level seldom reached (or even aspired to) in contemporary cinema, and you are are deadon, methinks when you assert: "Never Let Me Go takes science fiction elements, places them in contemporary English settings, most of them pastoral, and uses the incongruities as a backdrop for a touching story of love and identity in the face of a dark destiny."

It’s one of the most-thought provoking films of the year, and kudos to you Hokahey for penning an exquisite appraisal.

Oh, frabjous day, Sam! I let the right one in!

And thanks for your very eloquent comment. I'm glad you feel this way about this film. Nothing else worth seeing this weekend, so I saw it again, AND I'm reading the book, which provides a lot more insight into the mysteries that is subtly solved in the movie. I found the movie even more touching on second viewing. The scope of what happens to these "creatures" is gut-wrenchingly sad here. "O, brave new world/ That has such creatures in it." What a wonderful connection with that other dystopian classic.

I agree - the score and the cinematography are strengths here. Very haunting, poignant, and otherworldly.

Glad to have your comments here!

I wandered over to thank you for posting a comment on my blog (Jane and Geri Dish the Movies). You commented on The Town. And here I find a review of a movie I am so anxious to see but haven't managed to. With luck, I will see it on Sunday and will be sure to post a review. As soon as I can figure out how, I will be adding you to blogs I follow. I love your style and intelligent commentary.

Jane at the Movies - Thanks very much for the comment and the compliment. Never Let Me Go is a very touching story. I saw the movie a second time, and was still moved by it, and now I'm just about finished reading the book.

I've enjoyed your blog because I love your enthusiasm for going to the movies. That's what it's all about.

Keep going to movies and writing about them!